What's Up at League HQ

The answer is: Not much.

But, Matt's girlfriend, Nicole, has recently moved into League HQ.

We want to be a house where the doors are open to friends and family (and maybe the occasional foe, but they'll get a bill). Nicole's brother is currently undergoing treatment for leukemia up in Dallas, and that's made her living situation a bit oddball, so... anyhoo, we've got a person living in our guest room.

If Matt and Nicole break up during all of this, so help me...

Nicole is small and fun, and this should all work out nicely.

Anyway, work has been okay lately. I saw two interesting projects coming down the pipe at the office, so I will probably get the third one... But, whatever. It beats digging ditches and people really seem to like the fake aquarium I recently bought at CVS for $10. Here's a picture of a similar one I found online. I am also letting co-workers name fish after themselves, and its amazing how long they take to select a fish they feel represents them somehow.

I'm productive at work, i swear to God.

I also found my Frenchman on Facebook. Long ago I worked at UT, and an international student came into my office, lost and looking for a job interview elsewhere. I, of course, hired him on the spot and put him to work that afternoon. No, really. I ran a tight ship in those days.

T-Tine (not his real name) was a good guy, and the first Frenchman I'd ever spent so much time with. T-Tine was also really, really smart. He was at UT to study satellite technology at the time, and is now getting his PhD in human computer interaction stuff.

Anyway, for some reason T-Tine and I hit it off. Mostly because he would let me intorduce him as "My Frenchman", but he also did confirm my suspicions regarding the French and their love of bagettes. He was absolutely hilarious, and I assume he still is, so I'm thrilled to have found him.


Oh... and the Cubs have been a soul crushing disappointment. Ah, well. Not really. They're the Cubs. If I had my hopes up, I could be considered legally insane.
Posted by The League at 11:54 PM 4 comments:

If your copy of Dark Knight Returns is as mangled and mutilated from dozens of readings as mine is, then you will understand the following. Otherwise... not so much. 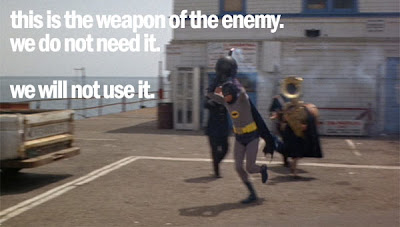 To be clear: The show is not about comics, Superman, or comic geekdom. However...

Last week, due to a DVR catastrophe/ meltdown, we missed the opening episode of the new CBS sitcom "The Big Bang Theory", a title which suggests either something either more in the realm of Nova or skewing into the adult film spectrum than the show actually delivers.

I wouldn't normally be up on the latest of CBS's sitcom offerings, but The Big Bang Theory stars Jim Parsons, a guy I know from high school and whose mom is still very pally with The Karebear. This week we got ourselves situated and watched the show rather than just letting it record (Jamie had also missed Heroes last week, and was quite despondent).

I am delighted to say that Jim is great as Sheldon, one of two geeky physicists living in an apartment across the hall from "Penny", an attractive Cheesecake Factory waitress. Of course, Penny is pretty, so the geeks across the hall (Sheldon excepted) awkwardly try to pitch woo while becoming distracted with geeky pursuits. Sheldon is the one decidedly not infatuated with the girl, and is, perhaps, mildly annoyed by his friend's infatuation. The program is a sort of "clash of cultures" comedy that pits stereotypes of socially awkward, but brilliant, minds against the stereotypes of pretty, anti-intellectualism without ever really taking sides.

What's interesting is that Sheldon is supposed to be a DC Comics fan, as hinted at through wardrobe choices and the opening segment of this week's episode in which the geeks were prepping for a Superman movie marathon.

It is odd to know exactly where you stand when you hear characters uttering actual conversations you've had as a point of amusement. Especially when the conversation is accurate, according to The Science of Superman (although Wolverton doesn't foresee Lois being cut into pieces as much as being smushed when Superman saves her).

Alas, I suppose I know I'm a geek. The 20-somethings at work have remarked as much, as have most girls in middle-school and high school. My wife. My parents. Jason, as often as possible.

What I do find curious is that the show looks at these sorts of things as tics rather than merely deriding comic fandom as a clean intersection with loserdom on the geek Venn Diagram (although most of the audience will surely read it that way, bringing their own opinions into the mix). The show has to ask you to respect Leonard and Sheldon to some extent, or else the premise of the multi-camera sit-com won't work (single camera sit-coms do not ask that you actually like the stars of the show. See: The Office, US and UK, and Arrested Development). So, just as Dustin Hoffman once bought his underwear at Sears when he wasn't counting matchsticks, our intrepid heroes ponder the might of the Green Lantern Corps when not discussing Newtonian Physics.

Further, its a sign that the 80's (and perhaps the 90's) have ended that the premise of the show is NOT the transformation of the leads "from geek to chic", but in letting Penny, and therefore the audience, discover the men behind the Superman t-shirts.

Now, from experience, I assure you, comic fandom may come part and parcel with a PhD in Physics (though I doubt it), but comic fandom absolutely does not equal genius in the sciences or much of anything else. It is nice, however, that the stereotype of my early comic reading days, that comics were for the dimwitted, apparently no longer applies (I was asked a question along these lines during an e-mail exchange with a journalist when I wrote for Comic Fodder. I was asked if I found readers to be kind of slow, or wasn't it a sign that the readers had no imagination of their own. No, she had no idea she was being sort of insulting.).

I withhold any opinion on The Big Bang Theory until more episodes air. I'm not sure how they intend to make the premise work over multiple seasons, but the producers do seem keenly aware that the trick to a show is a simple premise at first, then to build around the characters.

Wisconsin and back again

Friday we left for Wisconsin for the wedding of Jamie's cousin, Steve. I have seen Steve four times now, and three of those times have been at weddings, one of which included my own wedding, during which most of Jamie's side of the family sort of blurred together. I've sorted things out now with the Clan McBride/ Hendrick/ Swalley side of the family. But, anyhoo, that was why we headed to lovely Lake Geneva.

We mostly traveled on Friday, checked into our hotel where the clerk insisted we wanted five rooms, but, no... we wanted three and would not pay for five no matter what their reservation sheet said. I think I know where the miscommunication happened, but... anyway.

Saturday we woke up and there happened to be a classic car show in the small town of Lake Geneva, so we wandered down to the show. They had a nifty sorta banana colored Nash Rambler, I think a '55, which was what Lois Lane drove in "The Adventures of Superman". Well, apparently the driver of teh car knew this as their license plate read "LOIS LN", which i saw only after geeking out and identifying the car.

They also had a lot of mid-50s Chevy's, which I've loved since middle school, especially in that goofy aqua color they used back then. I'm no car guy, but I do like the occasional car show. It does, however, make one feel totally lame for owning a Honda SUV.

We wound up having lunch with Steve (the groom), Jeff (his brother), Jack (Jeff's kid), Nancy (Steve and Jeff's mom) and Joe (Nancy's husband and a fun guy) at a surprisingly good restaurant. I then fell asleep for a while, read some Superman on the balcony of our hotel room while soaking in 70 degree temperatures, then watched OU disintegrate in the second half.

The wedding was in a horticultural garden, and was actually a good ceremony. Nothing cheesy. The bride was lovely and the groom sharp.

We set sail for the reception aboard a boat. Most importantly, a boat with an open bar.

Unfortunately, there wasn't much in the way of dancing, so that'll have to happen at the next wedding so Jamie can feel she's gotten her groove on properly.

Sunday we rose, ate a nice brunch with the rest of the wedding guests, then hopped back on a plane. We got home around 9:30 after getting the dogs from jason, etc...

Today Jamie wasn't feeling well, so we ran to the doctor. She's okay now, and all is well. But, you know... I wanted a day off when we came back, but not really this way.

Weekends are better at Jason's 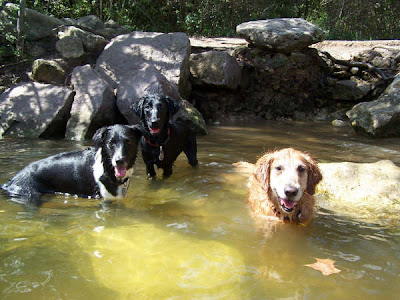 While we were off in Wisconsin for a wedding, Melbotis and Lucy stayed with Jason.

The other dog is Cassidy. Rrruuuooooouuurrrrr!!!!!!!
Posted by The League at 11:56 PM 2 comments: