Hey, all. I wish I had more to report, but since what I've mostly been up to is going to work, I don't have much to report. Jeff the Cat seems better. He's actually staring at me right now. And he hasn't been too sick since Monday. Logy, but not sick.

I don't even really know what's been going on in the news or anything. I bought a stack of comics this week that I've barely even had a chance to touch. Some of that has been that I haven't been going directly home after work this week, and part of it is being a bit logy myself.

Anyhow, hope you guys are okay.

I have to go shove medicine down Jeff's throat now.
Posted by The League at 10:07 PM No comments:

Hey, Leaguers. Sorry for the lack of updates. Work has been busy, and Jeff the Cat has been ill and required medical attention. Also, I slept a bit.

Hope everyone is well.
Posted by The League at 9:48 PM 3 comments:

Thanks to Julia, Lauren and Steven for coming out on Sunday night to bask in the glow of Superman: The Movie on the big screen at The Paramount. If you couldn't make it, The League understands and does not hold it against you.

With apologies to JMD, it was nice to see the(ahem) entire film on the big screen for the first time in a decade or two. The presentation was the extended cut, so there was a bit more to the movie than the good 'old normal cut (which will probably be lost to time).

It was also exhilarating to see the movie with so many other people, when normally I see it with an audience of one or two. People seemed to genuinely enjoy the flick, catching most of the jokes, sitting in awed silence at the appropriate moments and giving in to peels of laughter during the "Can You Read My Mind?" sequence, which just doesn't work all that well now, if it did almost thirty years ago. Folks even took the scenes involving miniatures very well, considering that one gets the sensation that the audience has accidentally wandered into a Godzilla movie for a few frames.

Walking out of the theater, I was approached by a fellow Superman nut who had some trivia he was busting to share with me (I assume because I was wearing a Superman t-shirt), and I enjoyed chatting with him briefly. Nice guy, but I felt bad as he had no Loyal Leaguers of his own with which to see the movie.

Anyhow, stay tuned for future assemblages of Loyal Leaguers!
Posted by The League at 10:45 PM 4 comments:

DC Direct has decided to put out figures of the New Gods in classic Kirby style.

I will buy them. I will also hope they add a Kirby Jimmy Olsen, Barda, Black Racer, Detective Turpin, and the Forever People, complete with a Super-Cycle.
Posted by The League at 2:31 AM 5 comments:

The League's own Nathan Cone is Simpsonified. 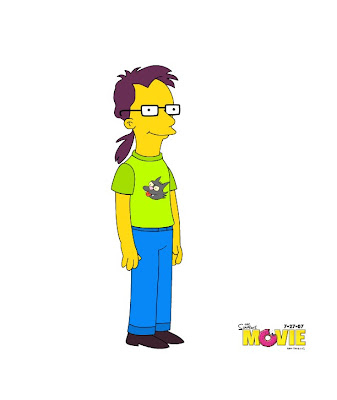 CBG posts her image, plus, gives herself a plotline!

It is true that Jamie's folks are here this weekend. In fact, they're here to look for a house and relocate to the Central Texas area in the next year or three. Friday, Judy and Dick hit the road with a realtor, and I'm not sure, but they may have already found something.

So take that, Mom and Dad (aka: those who like to look at houses but have no idea what they want).


My desk has a keyboard tray, which means my bulk will not always fit properly under my desk. Anyway, I was in a weird position, and my foot fell asleep at work. I was maybe fifteen feet from my desk before I realized I was getting that pins and needles feeling. Just as quickly as it decided to get tingly, my foot decided to turn in (I could see it, but didn't feel it) and the next thing I knew I belly flopped in the middle of the floor in the open area where all the multimedia people work. It was awesome.

You don't really think about it, but as an adult, you rarely actually fall over. Sure, you might trip, but you don't just flop over on your face. Anyhow, you see kids fall over and have this totally confused expression on their face, and for maybe the first time since I was 4, I totally had that feeling. Luckily, most folks had gone to lunch, so there weren't too many people around, but those who were seemed a little wigged to see the largest dude in the office go over like a sack of bricks.

I thought maybe I'd jacked up my ankle, but, for good-or-ill, I twisted my left ankle so many times growing up that there's a piece of bone where there shouldn't be, so I'm not sure I can actually twist that ankle anymore. So, all's well that ends well.

Anyhow, I am the raddest guy in the office.

As some of you might know, the Johnson family had a viewing (I guess you'd call it) on Friday and Saturday at the LBJ Library on UT campus. The viewing was closed casket (which makes it not a viewing, but there was no booze, so it wasn't a wake, either) and was going on through the night, so, after Jamie and Judy went to bed, Dick and I jumped in the car and drove down to the library to pay our respects. Lots of folks were there, and, of course, the grounds of the library were lit up.

Anyhow, I was glad we went. I wasn't sure what to expect, but there were all kinds of people of all different ages, some dressed for a funeral, others who obviously had come on a bit more of an impulse. But for 10:30-11:00 at night, there was a fairly steady line of foot traffic.

Today we drove all the way to Steiner Ranch, out to Lakeway, down to Wimberly, and then to San Marcos. Let us just say that the area in which Judy and Dick are pondering a house search is fairly wide.

We also went to Fonda San Miguel and played some Wii. I also slept for like two hours this afternoon, which is why I'm up at 2:00 AM blogging. I need to go to bed.