'Justice League: The New Frontier' Trailer
Posted by The League at 10:36 AM 4 comments: 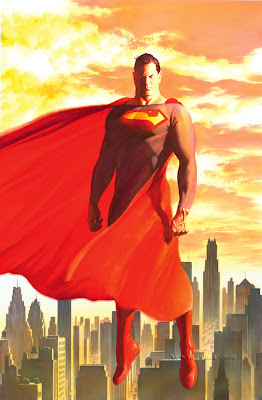 The stuff that has been going on in Green Lantern since "Rebirth" is some of the best thought-out and most engaging comics coming out of DC. I highly recommend picking up both the Johns-penned GL comics as well as the Gibbons and Tomasi-penned GL Corps.

Not only did Johns take us from kick-starting a formerly dead Hal Jordan and returning him as a major force in the DCU, he made a Corps that made sense and has expanded the scope of the Corps and their universe by several degrees. He also set up the need for four Lanterns and embraced all of them as equals, a scenario which works well for the GL fans who usually prefer to bicker over which Lantern should get the spotlight. And all since 2004. Well done.

But I also really wish DC would put the GL Corps stuff from around issue 200 - end of series back in print. I may have to start picking up back issues.

If you've ever read a GL comic, the panel above is absolutely huge. And is why I plan on reading GL Corps until 2010. The conclusion of the Sinestro Corps War went ahead and told us in 2009 we'll see the beginning of an event called "Blackest Night", and we'll begin to see the other Corps begin to form in the coming year.

Rebirth
No Fear
Revenge of the Green Lanterns
Wanted: Hal Jordan
GL Corps: Recharge
GL Corps: To Be a Lantern
GL Corps: The Dark Side of Green
Sinestro Corps War Volume 1
Posted by The League at 9:48 AM 14 comments:

I know you're already done buying and sending me presents for Christmas 2007, but if you're looking to get a jump on next year:

Dark Knight Trailer is now up

You can see a trailer for Dark Knight here.

Personally, I'm looking forward to the movie. It's interesting to see the "toyetic" parts of the Batman franchise coming to a crossroads with the post-Crisis/ first appearance of Joker interpretation of the Clown Prince of Crime. That's more or less what I want my Batman to be on the screen. Now, if they could just work in a Norm Breyfogle designed Batmobile.

If only they had taken a page from Morrison's book and done the Joker a bit more like the chap in "Arkham Asylum".

Anything is better than the Joker now appearing in Salvation Run. It's like Willingham wasn't even really trying.
Posted by The League at 1:48 PM 2 comments:

I could totally take out an entire Kindergarten class

Thanks to Randy
Posted by The League at 11:35 AM 3 comments:

Jason also waxes nostalgic regarding our trip to the mall. He discusses it a bit more throughly than myself and makes some comment as to the why's and wherefore's of how the place may have begun to spiral.

Plus, he liked Golden Compass better than me, so give his comments a quick review.
Posted by The League at 11:19 AM No comments:

I've Got a Golden Compass...

Well, the big news is that I think my folks have signed paperwork and will be building a house in North Austin. Super huge news as far as Jamie, Jason and myself are concerned. I will now be surrounded by parents on all sides. No getting out of town in the dark of night now.

We're very happy to have the folks coming to town for a multitude of reasons, just as we were quite pleased when Jamie's folks announced their intention to relocate to San Marcos. I tell you this much Leaguers, its going to make traveling during the holidays a heck of a lot easier.

Yesterday high school and college pal Erica Foster and her husband, Scott, happened to be in town, and so they swung by. It's really been a while since we've seen Erica, unless you count her wedding. Which I sorta do, but, you know, she didn't really get much of a chance to chit-chat, and we only met Scott briefly. It's always nice to see your friends married a good guy, and Scott is that. So... Well done, Bug. Jamie and I were quite impressed.

Hope to see you over Christmas.

Speaking of KOHS folks, former high school lab chum Jeff Wilser popped up in the old e-mailbox on Friday. Sounds like Wilser is doing very well. He's landed an editorial job for a NYC-based entertainment and nightlife review website. Not a bad gig, and its kinda cool to hear the guy you used to play lacrosse with and dissect the occasional pig fetus has done pretty darn well for himself.

We met up with my parents at Houston's Restaurant on Anderson Ln., but had an hour or so to kill before we were to see The Golden Compass at the Village Alamo. And so, we headed over to Northcross Mall to see if any of the shops were still open.

I wouldn't say Northcross was the busiest mall in Austin, but it's located in the middle of a good neighborhood, there should be a lot of traffic around it, and, hey... it had an ice rink.

I recall seeing "The Muppets Take Manhattan" at its movie theater in 1984 or so, and continued seeing movies there through the first year or two of college. I bought my copy of Cure's Disintegration at the Sam Goody there, and, I believe, Beastie Boys' License to Ill. It wasn't a huge mall, being Austin's first mall, but there wasn't anything really wrong with it.

But now, aside from a fairly dumpy video game shop, that almost seemed to be begging people to steal from it, a Sports Authority where Oshman's had once built a huge sports-plex/ store, and a still functional ice rink, there really isn't anything there. Well, oddly, there's still one of those places where you can go in and record a song in a booth.

There also seems to have once been a church congregating in a part of the mall, but they're gone. The food court and a whole wing of the mall are covered in drywall, so you can't really go there. The wing where the movie theater once stood may or may not be used for conferences now. I couldn't tell if that operationw as still functional.

But as we had time to kill before the movie, I really didn't know what to do but hang out there and sort of soak in the vibe. They're supposedly going to plow the whole place under next year and put in a gigantic Wal-Mart, despite the protests of the areas' residents. No doubt the Wal-Mart would do better than the tomb of a building that remains (I walked through the middle of the dried out fountain), but it seems like its wrong for such an old neighborhood to play host to a Wal-Mart that would be serving people not actually from that neighborhood.

I dunno. Maybe a Thunderdome?

The whole thing had a weird feel of saying good-bye to a place, if not a thing. I don't have a lot of memories tied up in a mall. But I do recall the puppies at the PetLand. And I remember Jason admitting to me (he being 17 and me 15) that he really hated Christmas shopping at the mall, a sentiment that I remember finding odd. I hadn't really thought about it until then. It was just something you had to do, like going to the dentist. But as he now had his own wheels (a swanky Camaro), I think he had a little more time to ponder what sort of shopping horror he would face down in the weeks leading to Christmas.

We watched some adult players knock a puck around the ice for a while (I don't think they were heating the building), and finally crossed the street to go see the Golden Compass.

The Golden Compass isn't bad, per se. It is very, very heavy on exposition for the first half of the movie, and you certainly get the feeling stuff is happening because that's how it happened in the book, not because the director and editor were able to get the momentum of the book culled from the footage. It's an odd disconnect, because the movie is really pretty, the performances are great, and the animal CG performers are terrific and seamless.

In part, the movie suffers because it feels the need to explain everything to the viewer like a manual rather than letting the characters discover anything, or else by letting us know what the deal is with their fairly complicated world by dialog and having a bit of faith in the audience. In setting up the world, the plot itself gets somewhat lost, and, honestly, I can't really piece together much, but it seems the Golden Compass should have just been called Deus Ex Machina for a goodly portion of the film.

Oh, also, the film is a big, poorly disguised allegory that I don't see a lot of America embracing.

I'm not sure how balloon-driving cowboys fit into the allegory exactly. Or Polar bears.

The girls sitting next to me certainly liked the movie. They cheered every time an animal appeared on the screen. Which is pretty much every other shot. They also found Daniel Craig dreamy. I did have to ask them to please keep it down, but they mostly were just really into the movie in a way in which I was not.

I guess if you're on the fence, the polar bears are pretty cool.
Posted by The League at 10:01 PM 4 comments: