Hey, Leaguers! Tomorrow is Valentine's Day, the day when we're supposed to celebrate romance, love, all that stuff...

So a salute to the lady I've been associated with, lo, these many years.

Jamie and I have been together since 1995, and this is our 13th Valentine's Day together. This year Jason got Jamie tickets to Ballet Austin for Christmas, so tomorrow evening I go to the Paramount to see some folks in tights hop about and spin. If they added capes and someone got a knuckle-sandwich in the third act, it wouldn't be too much different from what I'd be watching or reading on a Thursday anyway, so I'm looking forward to it.

It's no secret that I'm not a huge fan of Valentine's Day. Partially because, I mean, honestly... once you're in it as deep as we are in the shared property department, its kind of tough to fathom why you need a special day. You have anniversaries, birthdays, real Holidays and many opportunities to communicate your specialness to one another. And somehow a $0.002 candy heart with the words "LUV YOU" printed on it seems to not really convey the meaning...

Anyhow, Jamie's a special sort of dame, and if you have to put up with the hoopla of flowers and not-very-good candy, etc... you might as well feel good about who you're doing it for. And I do.

Love you, Jamie. Happy Valentine's Day.
Posted by The League at 11:00 PM 2 comments:

So I'm going to be making a bit of a career change.

I like my current job. I do. The people are great, the work is interesting, and I've made some genuine, lifelong pals. That ain't bad. I like my clients, and I like what we do.

However, I've been given an opportunity elsewhere, and there are enough advantages to the position that I'd be silly not to take it. From the interviews, I can tell you the people at my new office seem terrific, too. Apparently I'm invited to a potluck in a few days. And I don't cook, really, so have I failed before I've begun? Maybe they'll be happy with a canister of Pringles.

The change will be very soon. Two weeks and a few days from now.

For Leaguers who've recently joined me at my current place of employment, I wish you the best of luck. You're smart and a go-getter. I am sure you will be quite okay without me saying hello every time you go to the water cooler and are forced to enter my line of sight.
Posted by The League at 10:33 PM 7 comments:

Stray Thought of the Day 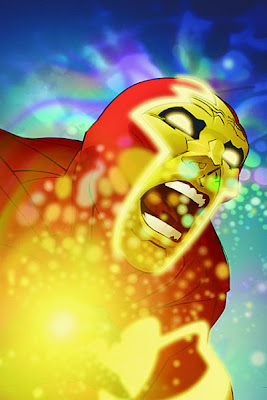 An apology to Peabo

Firstly, I gotta apologize to Peabo. I completely misunderstood what had happened with Herbie Hancock and believed he'd won for some sub-category, not album of the
year. I now understand the dismay a bit more. But I find the selection by the Academy to be fascinating.

I've dismissed the Grammies as little more than an acknowledgment of what Billboard has told us through record sales. Some vanilla pop would always win, stuff that had sold lots of records and usually had little to no artistic merit. It wasn't enough that Milli Vanilli had their award taken away. After all, someone had voted that their album was the best of the year to begin with. What group of right thinking people would come to that plurality opinion to begin with?

It seems that rather than further dig the music industry further into a hole, and further cementing the reputation of the Grammies as useless, could the music industry have made a decision to actually vote for something other than popular pop? I don't know, I haven't heard the album. But... it certainly makes me raise an eyebrow. If you want an analogy, it seems as if they went from voting for "Transformers" for best picture and maybe went for a "There Will be Blood".

I can't claim to be the huge fan of Hancock that JAL, Jason and Nathan are, but it's exciting to see him recognized for his work on such a big stage.

At last I feel free of the yolk of the whole DITMTLOD thing for a day or two. Jamie assures me she's putting together her own list. What is the acronym, then? DITMJOD (Dudes in the Media Jamie Once Dug)? I don't know.

The weekend came and went too fast. These things happen.

Friday we stayed in, watched Jurassic Park for some reason, and I noted that so much of what seemed forward thinking in 1993 now seems like relics of a bygone era. Children declaring "This is a Unix system! I know this!" and then flying around through a high-end CGI interface when most people still didn't know what a folder was in Windows 3.1. Declaring that something being expensive must equal the cost of the item (light = plastic and cheap). Ignorance of chaos theory, and, of course, supposedly top paleontologists loudly declaring concepts that were then widely held in the paleontological community, and which have now been fully integrated into the zeitgeist.

We all know, in 2008, that some dinosaurs became birds.

Saturday we cleaned. It takes a serious amount of time to clean my shelves, and if you've been to League HQ, you know of what I speak.

We caught up with CB and David at the Alamo for a showing of Sweeney Todd. I actually liked the movie quite a bit. There was the definite feel of the underlying architecture of the stage musical beneath the whole thing. Young lovers, dramatic irony, a despicable villain or two... I'm not terribly familiar with Sondheim, and I have only vague recollections of CB and I viewing a portion of a PBS presentation of Sweeney Todd from back when we were in college.

If nothing else, being a bit of Burton nut back around when he did Ed Wood and Mars Attacks!, I recall that Burton had wanted to do Sweeney Todd back then. Part of me is very glad he waited until he had the cast he needed (Bonham Carter and Depp are great. Rickman is typically terrific), and the maturity to pull it off without getting precious about the whole business.

We were scheduled to come back to League HQ for some dessert, and were maybe twenty feet inside the door when Mel sneezed, somehow blowing his drainage tube free from his mouth. I have no idea how he pulled that off, but it was kind of sad... just hanging from his mouth, inside the dog-safety-cone he'd been wearing.

The eVet clipped the tube free, and Mel is fine. It was just typically weird stuff that seems to happen with us and our pets.

Yesterday Mel took it easy and I took Lucy to the dog park for a game of fetch. She had a lot of fun, but couldn't outrun this one red dog. I'd never actually seen that before. It was kind of funny.

Anyhow, back to work now.

Hope you had a good weekend.
Posted by The League at 9:42 PM 3 comments:

I still have to pause and remember that Obama is Obama's last name. It still sounds to me like a first name. I think it's the fact that it ends with a long "a" sound, whereas his first name sounds like a last name, ending with a hard consonant.

Apparently in high school, he went by "Barry".

Also, Mike Huckabee is still hilarious. Watching him on the Colbert Report using Texas as a piece in air hockey was somehow deeply satisfying and said more about our process than I think was intended.
Posted by The League at 12:14 PM 2 comments:

So, I've already covered several DITMTLOD of the 1990's. I thought I'd include a list of honorable mentions of the era, whom we may return to for further exploration in future installments.

Here's a smattering of folks who almost, almost made the list. I've also asked a few Leaguers to tell me who they thought deserved to make the list. Steven has promised a list of his own, but dare he deliver...?


Part 3 - Subsection A: The Honorable Mentions

Jodie Foster
Why: She was great in Silence of the Lambs, Little Man Tate and was the only part of "Contact" that I liked.
Why not: Fessing up to an admiration for Ms. Foster can get you on watch lists for the Secret Service, the FBI, the CIA and the Girl Scouts of America

Salt'n'Pepa
Why: The video for "Shoop"
Why not: I am not sure I was a fan of the actual music of Salt'n'Pepa. Plus, I think, like a lot of girl groups, they had the Voltron effect. They were better (and more formidable) together than apart.


Salma Hayek
Why: Desperado and From Dusk Till Dawn
Why Not: Pretty much everything else she did in the 1990's, capped off with "Wild, Wild West", which I blame on her agent.

Jamie McBride in "The Final Cut", "Finding Mike", "Ryan's 16mm test footage"
Why: Super foxy. Mysterious, kick-ass allure.
Why not: After 2000, didn't appear in much but in Christmas and travel videos produced by video auteur Dick McBride.


Part 3 - Subsection B: Dames of Interest from Other Leaguers


That's it. And will be it for quite some time. I am quite drained after so many DITMTLOD, and I assume the readership is quite sick of it as well. Well, this week we'll be back to comics, movies, dog reports, and more of the same uselessness you've come to expect.

That said, we have a comments section. Feel free to chime in and tell me where I went wrong on this whole "dames" thing.
Posted by The League at 9:56 PM 12 comments: