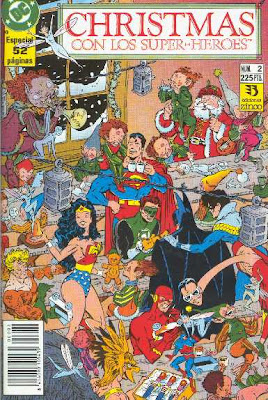 Yes, Leaguers... I'm not ready for it, and neither are you, but it's that time of the year again. We're hurtling toward the Holidays like a comet towards Dinosaur-infested Earth. So it's time for ordering that Hickory Farms basket, pretending someone else sent it to you, and then eating the whole thing in one sitting.

It's also time for The League of Melbotis 2007 Holiday Heckstravaganza!

Needless to say, you're all in invited. Yes, even you. 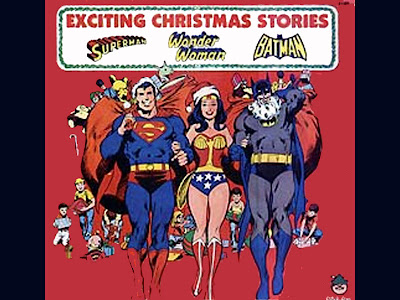 So hire a baby-sitter, contact your parole officer and free up your calendar for the night of December 8th, 2007. For that night, mi amigos... we ride upon the Federales!

There's a small possibility that from 9:00 - 9:30, we will be entertained by the smooth, Holiday sounds of Jason's band, CRACK.

Further, there will be Wii. And snacks. And booze. Really, rum and egg nog sorta make my memories of last year's party kinda hazy, but it seemed we all had a good time. And the cops who showed up were real swell guys.

This party is BYOB, so bring a bottle of your favorite libation and we can all join in the merriment. There will be carols, and Ritz crackers and bum fights. 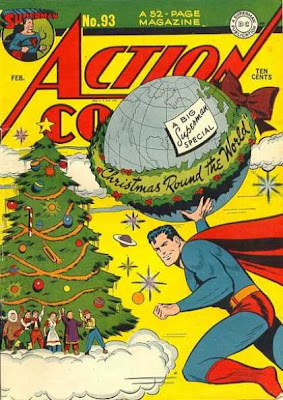 We're hoping you can come on down!

If you're planning to show, shoot us an e-mail or request a link to the Crusher invite. We'd like some sort of tally.

Get Out the Vote

I went to vote on a few ballot measures last night after official work day and before dinner/ night work.

For once, nobody was running for office, so it was entirely voting on propositions, 3/4's of I had not done any research. So I skipped a few items and tried to understand what they were asking for on a few others, some of them fairly straightforward, like bonds for road work.

The controversial issue on the ballot was the request for state money for cancer research. Like most folks, I have a beef with cancer. Like most folks, cancer has touched my family and friends. I also know cancer is not a single disease but a blanket term to describe a plethora of conditions. I am also concerned about the distribution of money, and understand that there are many diseases to worry about. Take kidney diseases like FSGS. That one is much less fun than it sounds.

I guess my reasoning came down to: in 500 years, what will we have done? Will we have spent our vast resources building giant robots to kill people who do not have giant robots? Will we have chipped every person on Earth and spent money to make sure we were keeping a close watch on them? Will we have made any inroads to actually stopping the causes of grief and people raising their hands against one another? Or will we have insisted that the fight to heal the sick is someone else's mission?

I am not a doctor. I am not a nurse, or even much of a caretaker. I am not a researcher, and I am not able to help people much in my day to day life (and this is something I am considering in depth these days). There is very little I can do out there to help more people than myself and my family and friends. But there is a lot WE can do to help each other.

Without passing judgment on the rightness or wrongness of the current wars, I would rather live in a country at war with cancer, diabetes, heart disease and many other killers than with other nations or peoples. I don't see the two as mutually exclusive. One of the number one things any candidate could do to make me feel safer would not be to promise me endless war against any enemy or outside threat. They could promise me they would dedicate their term to the eradication of disease and hunger. In the end, I doubt I'll die from a dirty bomb. That may be naive, but I am certain diabetes, cancer or heart disease will kill me.

These things seem simple enough at face value, but they aren't where the people we elect put our money or our priorities.

As I mentioned, I am concerned about the use of the money. Government agencies are run by people, and people make ridiculous decisions. But I'm not sure that doesn't mean we shouldn't try, or that nothing will come out of the research, even if it isn't a cure.

So I voted for Proposition 15. And against getting rid of the office of taxidermy or whatever that wacky bill was.
Posted by The League at 10:32 PM 8 comments:

Halloween has come and gone, but I feel that I would be negligent if I didn't post some additional pictures of some super Halloween costumes.

Below is SuperXan and CB. More here. And, here. 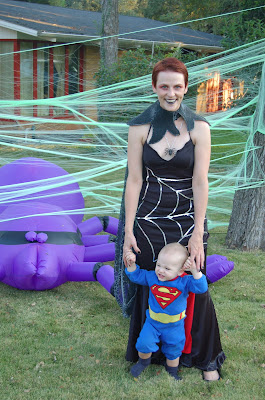 CB proves she is a person who knows how to raise a child the right way.

My parents live next door to some great folks who have taken on the unlikely task of producing substitute grandchildren for my grandchildless parents. It's a great arrangment as my parents get grandkids and I get to continue to spend money on comics.

I always said Jonathan and Kelsey were sharp kids, and it appears that they really know how to pick out a costume. 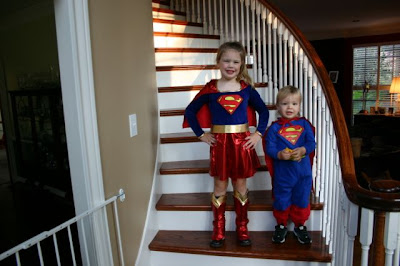 I may go see Fred Clause. Just to annoy other people.

Jeff the Cat had a few teeth pulled this week. He is doing very well and doesn't seem to miss them.

Carla made very good cupcakes. I bring this up not just to say Thanks!, but to point out that she's launched a new site, Dessert Lounge!

My folks were in town this weekend once again looking at property. This time, they may have even found something.

I slept a lot this weekend.

We walked the dogs. That was very nice.

I ran into a co-worker at Austin Books.

Jason bought an X-Box and Halo.

I didn't watch the UT game and am regretting that decision. I did watch the Colts game and the Dallas game.

I briefly did some work.

The weekends are too short.

SOME COMICS I ENJOYED

Action Comics 858: After Infinite Crisis, DC decided that it was a good time to join the past/ future of Superman together with the Legion of Superheroes once again. A great set-up, wonderfully drawn, and for those (like me) with a gap in their DCU knowledge regarding the Legion, this is a great read.

Batman 670: You can't keep a good Demon's Head down. I didn't like the loss of Bat-villain Ra's al Ghul, as al Ghul was always one of the more complex characters in the Bat-Rogues Gallery. Morrison is doing the most to redefine Batman's world of any writer since the post DKR-era.

Justice Society of America 10: Do you like Superheroes? Did you enjoy mid-90's DC project Kingdom Come? Do you like Superman? Can your brain handle the multiverse? I don't know why this volume of JSA is so much better than the previous volume, handled by the exact same writer, but... man. Every month when this title comes out, this is the first comic I read from the stack.

Crime Bible: The Five Lessons of Blood (1 of 5): Montoya is back as The Question. Cult conspiracies, hard-boiled detectives, Greg Rucka, Tom Mandrake... Worth a look.

Tales of the Sinestro Corps Presents: Superman-Prime: Uhm. Look, this just isn't going to necessarily be a great first comic for anyone to read, but it is a good read as it basically ties together the entire past of the once Superboy of Earth Prime.
Posted by The League at 10:59 PM 6 comments: