regarding my concern over the title of the post and then my quote, I did a little googling, and figured out that Journalista was actually referring to the article further down in the body of the article.

Apparently the title referred to a now defunct comic strip featuring cartoon animals with colorful names. As we've noted before, The League doesn't end up reading web comics for reasons that remain a mystery. But web comics are exactly the kind of territory that Journalista! does cover.

So, anyway, looks like being tired and alarmed was not a good combination.

Here's a link to the comic in question.
The name of the site is not G-rated.
Posted by The League at 7:07 PM 2 comments:

He Lives! He Walks! He Conquers!

This was all over the internet today, plus I received an e-mail or two linking the pic.

The first pic from the upcoming Iron Man movie has been shown.

The thing to keep in mind is that Iron Man changes his armor like you or I change our socks. Expect multiple suits of armor.
Posted by The League at 11:13 PM 1 comment:

The new job goes well. I'm a bit shell-shocked as I expect to be when starting a new job, but things are looking good. As per the hair from Day 1 of work...

Jamie's car is in the shop, and I needed a ride to work as Jamie needed my ride on Wednesday. My new job is literally five blocks from Jason's office, so he took me in. The stipulation was that he didn't want to tack an extra half hour onto his commute to go South and then north again, so I slept at his house. The hair care products in Jason's guest bath are different from my own, and I think what you're seeing there is what happens when I stray from my own hair care plan. Longtime pals know that when my hair grows out, I get the spit curl whether I like it or not. In AZ I mostly kept my hair too short for the spit curl, but here in Austin, the barbers do not give you a crew-cut no matter what you ask them to do. Here they left me with some length, and with some humdity, the spit curl has made it's return. In the picture in question, the spit curl just looks silly.

The chubbiness is, however, completely self-induced.


I'd like it if everyone could put some positive vibes toward my mother-in-law, Judy. She's having surgery tomorrow, and we're all hoping it goes well. Jamie is up in Oklahoma with her now, as is Doug and Kristen. Starting the new job, I couldn't go, and I'm feeling no small bit of guilt over that. Judy is always here for us when we need her, so I'm feeling a bit like I'm not holding up my end of the bargain.


Here's the risk of going online with your opinion. Dirk at Journalista! has chosen a less than flattering way to describe either me, my post or the state of comics. It's unclear who, really, he's referring to. I confess to not being a regular reader of his blog, so I really hope I'm missing some context, but I have to assume it's not flattering.

And on my birthday! Egads.

Why is it when I get linked to, it's invariably by someone pointing out that I'm an ass? How come nobody ever links back to the League or Comic Fodder from well read comic blogs and says, "That Ryan kid is really on to something!"

Anyhow, I'm a little perplexed by the quote, and, in my self-centered, defensive way, I think he's taking a line from a very lengthy post out of context, but, heck... I wrote whole history papers in college the same way. So more power to Journalista!, I suppose.

You wants to writes the comics reviews, you's gots to learn to roll wit' the punches.
Posted by The League at 10:41 PM 1 comment:

Hey, hey, a million miles to mark A
Lay on the lawn
He's already home
When the morning rain hits his face. . .

Transdermal celebration
Jets flew in formation I could see them
Dropping their crustaceans
Leaving trails of flame in their wake
But where is the mutation
That once told me it was safe?
I can't find him

Hey, hey, a million miles to mark A
Lay on the lawn
He's already home
When the morning rain hits his face. . .
Posted by The League at 11:01 PM 10 comments:

I started my new job this week. Please forgive me for lighter blogging than usual.

This unfortunate photo was posted to the company's intraoffice blog welcoming me. 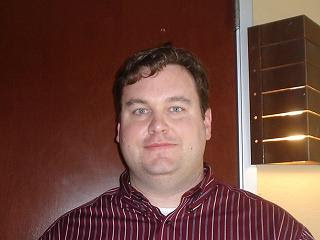 My hair was not doing well today.

Anyway, the company seems super cool, and I am very excited.

Hope you Easter Weekend was fabulous. Ours was unseasonably wintery and freaky. There's nothing sadder than an unshaven, weeping Steanso sitting on your front stoop looking out at the mud and the rain and asking why he can't hunt for eggs. I never want to go through that again.

After more interviews than I want to think about a lot of self-loathing, Friday I may have finally found gainful employment. As always, I'm keeping details to myself, but this place is a lot more in line with what I had in mind when we came back to town. I'm pretty darn excited. Should be starting pretty quickly.

Last night we had an early meet-up with Leaguers Carla and JAL and their respective spouses as well as Hilary and Stuart of The Flyin' A's. It was a Canyon Vista Middle School/ Westwood High mini-reunion, and was wildly entertaining. Finally met the man brave enough to marry CB, not to mention be her baby daddy (baby Xander was not there as he had some errands to run). And it'd been a while since I'd seen Justin and Tania. Hit the Draught House, and then popped over to Waterloo Ice House for a late dinner. And ice we had. In our freakish Texas storm, sleet came down on the roof of the Waterloo, and formed on our cars. But, luckily, nothing stuck.

That said, I was supposed to go to a karaoke party after the Warrior engagement, and ended up skipping out when the weather seemed to be just getting worse. I feel pretty bad about skipping, but The League fears Austin drivers on Saturday nights under the best of conditions.

We also watched the film adaptation of "Running with Scissors". I don't really understand why the director omitted certain vignettes and plot points from the memoir. Or why they cast a guy who was pretty clearly much older than the 14 years old that Burroughs was supposed to be, or why they added in certain elements, some of which seemed to stem from press that came out after the release of the book. On the whole, not a great movie.

This morning I woke up late. We met up with Jason, then headed to iHop for a sort of bleary Easter lunch.

This afternoon I was checking the new grass growing in our yard to see if last night's storm had taken out my Bermuda seedlings, and Jamie detected the scent of gas. I have a few theories on why, but Jamie's car apparently developed a drip from her gas tank, which should be nice and expensive to repair, and now I have to figure out how to get gas out of my driveway.

I didn't announce it as it was approaching, but I should have. Jason and Reed's band, The Mono E(nsemble), played last week. Here are some photos. 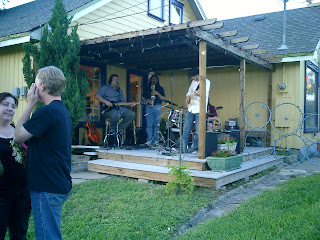 Mono E takes the porch/stage at Ben White Florist (the "bwf" to the hip*). 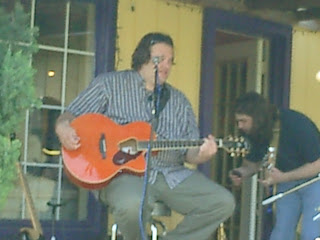 My brother doing what he does best: taking up space 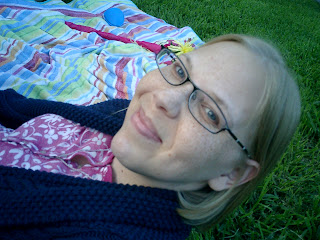 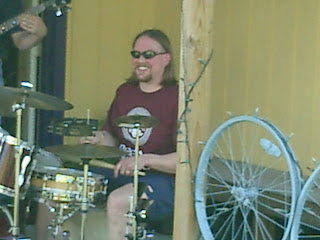 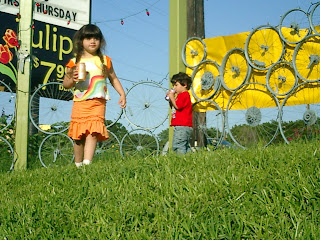 Some kids goofing around on the hill. I don't know who they are. I just like this picture. 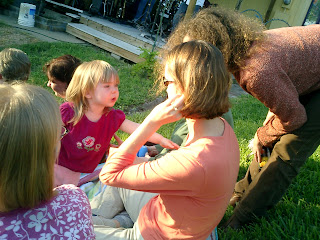 Reed's kid, Meredith, explains something to Jen and Anna 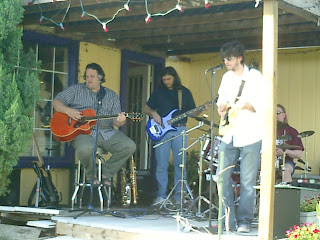 The band rocks out 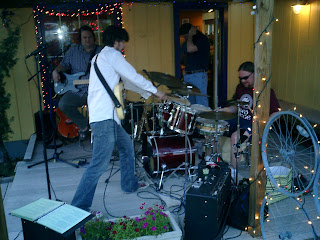 And you can tell things get out of control when guitarist, Frank, has to work and isn't there to keep things under control. The Reed drum solo came to a nerve shattering conclusion with Eric stepping in for a climax worthy of the Rock-Afire Explosion. Also, note bassist Jim (not OUR Jim, but A Jim, nonetheless) in the back, hiding in shame.


Rock on, gentlemen. Rock on.


*this is a lie. Nobody has ever said "bwf" to my knowledge. But it IS on their free refrigerator magnets.

The name Ben White Florist isn't actually terribly accurate, and every time I try to go to the location on So. Congress, I first go to S. 1st by accident. It is only when I ponder why theya re playing, usually somehwere near Polvo's, that I remember where I'm supposed to be going.
Posted by The League at 11:31 PM 2 comments:

Jamie and I wish to express our heartfelt sympathy to the family and friends of Liz Pieper. Liz passed away this weekend after a long battle with cancer.

You can read more atJason's site.
Posted by The League at 2:07 AM No comments: