I recently returned from having brunch with Steven G. Harms and his lovely companion, Lauren. I have decided that I like Steven and Lauren enough that I shall begin to stalk them. Why, if they play their cards right and look out their window hard enough tonight, they may see me peeping through their blinds with a night-vision scope.

It is an odd thing, this meeting folks you have previously only spoken to online. Not awkward, but every once in a while I did have a little moment of clarity wherein I would think "gee, you'd think we'd done this before," but I guess that's the magic of the interwebs.

I look forward to seeing more of Steven, especially when he has no idea I'm staring at him from behind the drapes.

Tonight I am joining up with Shoemaker for a bite at Hut's. Jeff loves the burgers, and I love, specifically, the Ritchie Valens burger. I hope that my four year absence has not allowed them to remove it from the menu.

I also received a few pictures of Arden H-W, who is bracing himself for another K-Zoo winter.

Jill sent out photos with the following:

We are in the midst of fall and winter!! Arden's snow person, Vince, has melted--as it melted, he kept looking out the window saying, "Poor Vince. Poor poor Vince!" 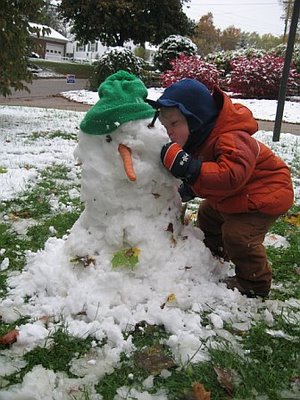 A moment of happiness for Arden and poor, doomed Vince
Posted by The League at 1:42 PM