You have asked for my e-mail. Here is the trouble... You did not send me your e-mail address. If you look in the left hand menu bar, there are instructions for how to e-mail The League of Melbotis. We will then follow up.

Oh, and I hear congrats of some sort are in order.

So today we went to see "Borat".

It's not often you spend a good deal of time watching a movie wondering how they completed the film without winding up in jail. Really, only the Jackass movies spring immediately to mind when you apply that sort of criteria. And, like Jackass, while viewing Borat, you will spend a good deal of your time wondering how anyone could lack the filter most of us walk around with that prevents us from (a) making others miserable, and (b) doing things that the average human would most likely not do for love or money.

Many people will see Borat and they will laugh. My parents would not be among those people. Well, you never know what the Karebear is going to dig, but I'm willing to bet that Borat comes and goes as a cultural phenomenon and she will never know. All for the best, probably.

Honestly, I wasn't nuts about the film's insistence on using a framing device and a storyline. I think Borat is relatively self-explanatory, and the interstitial scenes of Borat and his producer too often took the wind out of the movie.

I know Borat has been sued by some of the folks who appeared in the movie, and late-1990's internet phenomenon, Mahir, is apparently attempting to sue the filmmakers for stealing his persona. If this were possible, I think Randy might have a lucrative case on his hands.


A few weeks back I was at a wedding. I mentioned that Josh had gone into battle with an elk. Here is my evidence: 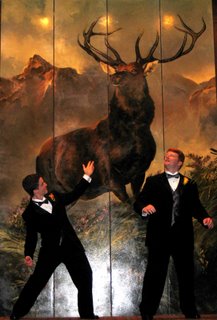 Josh is ready for action. The other guy, Frank, was trampled and lost his despoit from Al's Formal Wear.