In the past week, two blogs, new to our eyes, have crossed the desk of League of Melbotis.

Jill HW is blogging at the recently founded Potato Leek Soup. Sure, the name is going to draw all kinds of hits from misdirected cooking fans, but I think it's got a certain zing to it.

Jill was in my creative writing class in 12th grade and English class in 11th grade. I can't vouch for her writing since the early 90's (except for a lot of e-mails), but Jilly has a PhD, which you don't get by dangling your participles, Leaguers.

All this reminds me: The League may one day sponsor a contest in which we will grant $500 to someone who can correctly diagram every sentence in a lengthy LoM post. But in order to do this, we will also need an English PhD to verify the findings. I literally failed the "diagraming sentences" unit in 7th grade Language Arts.

So, welcome to the cut-throat world of blogging, JHW. Your prose are always welcome.


Blog #2 comes from a source I was surprised I had not heard from before: one Laurenn R., of the rolling hills of West-Central Austin. She's doing great work over at Ab Absurdo, and has been for quite a while.

Well, the secret's out and I'm sharing the pages of Ab Absurdo with you. Go check 'em out.

My advice to these two bloggers as someone who's been at this a while:
Don't ever mention the words "nude" and "Supergirl" on your blog, because the combination draws all kinds of unwanted traffic.


The KareBear is here. We've had a lovely day. I finally bought Cousin Sue a Christmas present and a sort of lame birthday present. I almost bought her a whoop-ass candle, but I couldn't see her using it. I shall buy it for Jason for his birthday instead. Or at least show it to him sometime.

We had dinner with KareBear, Jason and Mandy at Maudie's on Brodie. The fajitas were much, much better than those at Casa G's.

Then we opened Christmas presents for Short Christmas, and Mom really outdid herself this year. Well done, KareBear.


RHPT in the Phantom Zone

And finally, on Randy: Once trusted by this Council, charged with maintaining the defenses of the planet Krypton itself -the chief architect of this intended revolution, the author of this insidious plot to establish a new order among us - with himself as absolute ruler.

That's why we totally condemned him to the Phantom Zone. 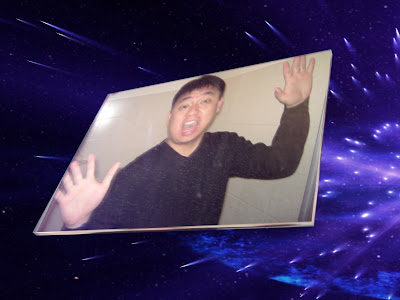 RHPT isolated in the Phantom Zone, an eternal living death

In a fit of Short Christmas cheer, I am conceding to the wishes of the highly suspicious results of this month's poll. Tomorrow I shall release RHPT from the Phantom Zone. Sure, he's a treasonous criminal, but he's OUR treasonous criminal.

Have a good Christmas free from the PZ, Randy. I'll set you free as time permits.
Posted by The League at 11:16 PM