ITEM! Randy finds a strip that is all too accurate.

ITEM! It's only taken, like, two years, but they're finally wrapping up the "Last Son" storyline in Action Comics Annual #11 coming out this week. Great googledy-moogledy. I'd heard the Kubert Brother working on this had "health" problems that kept him from working on this comic and getting it in on time. He also helps run the Joe Kubert School of Cartooning or whatever in NYC. I understand health issues can be private, so I'm not looking for an explanation. But I wish DC had hired another artist and wrapped this up a while back. Hopefully DC has their scheduling straightened out for the foreseeable future on the Superman titles.

ITEM! Hi, Denise! How are you? How are the kids?

ITEM! Jason, Jamie, Julia... sorry about the whole Speed Racer thing last night. I had passes to a sneak peek, but I thought they were for the nearby Westgate Theater. When I grabbed them to get ready to go, I realized they were for the Gateway Theater on the other end of town. So... we didn't end up going due to the time.

ITEM! The Met has a show right now called "Superheroes: Fashion and Fantasy", featuring superhero costumes right alongside some of the more extreme fashion ideas. Especially from the 80's, I think.

Click here for The Beat's report and to see an amazing statue of DC's Trinity. They also had one of Lynda Carter's costumes. Whoo!

ITEM! I don't remember where I read it, but there's a rumor that Matthew McConaughey may have landed the role of Captain America. Which... Really? I always thought he was more of a young Michael Biehn.

Of all superheroes, Cap is really the American Superhero ideal. He's the barrel-chested, baritone voiced, two-fisted slugger fighting against fascism. Is that McConaughey? I've never seen his more action oriented flicks. And I don't want a Vin Diesel or some pro-wrestler putting on the feather-headed cowl, so...

And I don't know how many of you have seen the circa 1980 Cap movies made for TV, or the 1990 movie which never made it to theaters (starring no less than the son of JD Salinger), but the costume sorta doesn't work in real life. But I think if they took a look at Hitch's designs for Cap in The Ultimates, then, maybe it won't make him look like a member of the cast of a Superbowl Halftime Show. 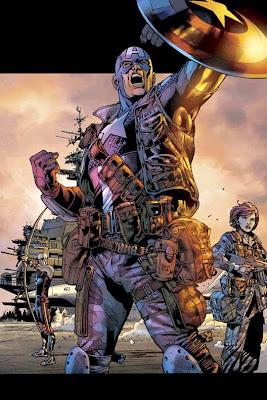 What's the deal? Is everyone with a SAG card eventually entitled to be cast as the lead in at least one superhero movie?
Personally, I have a hard time taking Matthew McConaughey seriously in anything (I can still enjoy him in a comedy, I guess, but he seems to lack the intensity for any kind of "serious" role), so I think he's sort of a lousy choice for Captain America, but maybe I'll be proven wrong.

I have to agree with Steanso in questioning this casting decision. McConaughey? Really? I just have a hard time believing he's not going to follow every line reading with a lazy smirk, and isn't the Cap all about sincerity?

In truth, they're kind of far off from shooting. It often seems that studios float these rumors to see what the fanboys say about their choices. Like: Ashton Kutcher for Superman? Booo! An unknown guy for Superman? Yay! Christian Bale for Batman? Hooray!

I have to say, I think that by-and-large, the studios are much, much better about the superhero casting than they were ten years ago, and certainly seem interested in the potential for great, high caliber entertainment. And theys eem to have learned that if you're going to spend money on a known actor, you might as well have the audience buy in first.

A while back, they almost did Iron Man with Tom Cruise. Which I think would have gone over like a lead balloon.

I think this McConaughey business is a bit more of the same. Just testing the waters.

In twenty years computer graphics will provide every kid in America with the ability to create his own version of Spiderman on his laptop (probably without the need for "skin actors"). Then we're going to see some interesting sh*t.

I learned in the 80's when the rumors were a plenty about a spider man movie (thank goodness it got tabled...) to hedge my bets when it came to "coming soon" movies that aren't in production.

Hi!
The twins rock!
We are tired.

I am 95% certain that Dylan will be a linebacker (he is STRONG and BIG) and that Grace will be an astronaut (you should see her work the exersaucer).

Peace out,
Denise
P.S. While Mr.McConaughey is a nice piece of eye candy, he is no Captain America.

Glad to get a twins' status update! Stick it out. You'll get a good nights' sleep in, like, 18 years.

Also, when you are ready to train Dylan and Grace as shadow warriors, you may deliver them into my care. I will return them to you as silent masters of death.