Thursday we arrived in Costa Rica about 12:00. We rented a large Toyota SUVish thing and hit the road for the Arenal Observatory Lodge. Arenal is a large volcano in the North Central portion of the country. 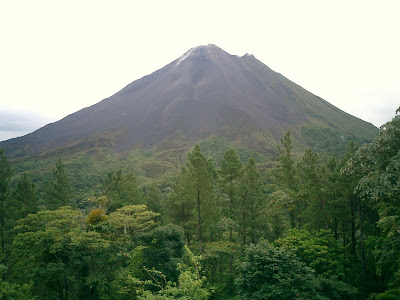 I got us lost almost immediately, so it took us about 4.5 hours to get to the place, when it should have taken 3 - 3.5. Sorry about that. Also, the road was wet, windy, and had me on my last nerve. We later learned, this was nowhere near the worst Costa Rica had to offer. But the sheer drop offs to 150 feet of lush, canopy covered doom kept me on my toes.

The next day we hiked in the jungle, observed wildlife and plantlife, and swam a bit in the pool. I also read a bit. 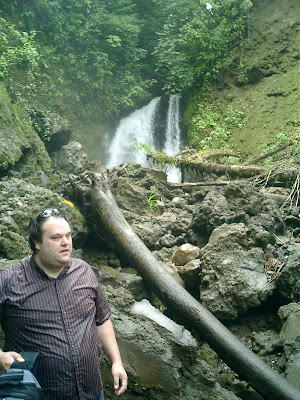 Jason at Waterfall. He did go swimming in the waters.

The Arenal Observatory Lodge was great. We were quite pleased. 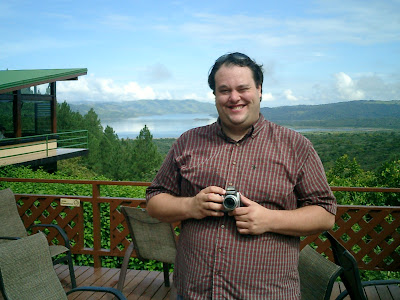 Jason takes in some sun. Behind him is Lake Arenal, a warm lake, heated by MAGMA (I think). Anyway, its warm.

We drove out Saturday morning in nice sunshine. Costa Rica is relatively small, so we cut halfway across the country in a few hours. 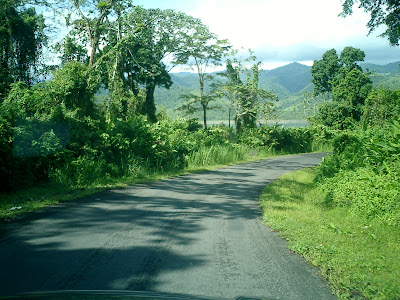 The road out was scenic and much easier to drive 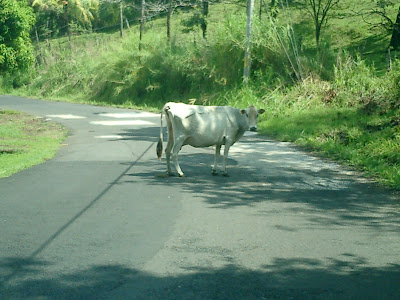 We encountered some minor obstacles

We arrived at Playa Samara around 1:00, and checked into the Hotel Las Brisas Del Pacifico. It's a really nice resort, and as we were there in the off-season, it seems we were two of only about twelve people at any time. That means we had a nice beach and pool mostly to ourselves. 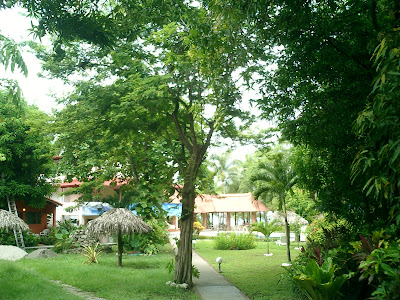 The town of Samara sits on the beach and is full of friendly folks. We were on the beach for maybe half an hour when Jason said to me "I wonder if any of these people know how good they have it?"
As if on cue, within five minutes a gentleman rode up to us on a horse and introduced himself. He was a recent retiree from the Venezuelan petroleum concern. He had been educated at the University of Florida, worked as hard as he could, and had no found his piece of paradise. His life's duty was to now ride the beach and tell folks to live a good life.
So, yeah, some folks knew exactly how good they had it.

We also went into Samara for some meals and to look around. 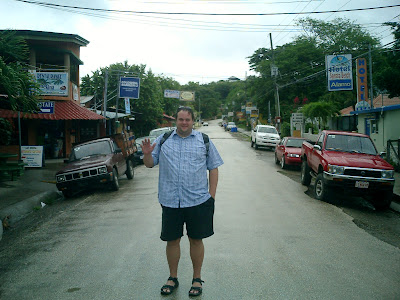 Jason stands in the main road of Samara. Not very busy on 12:00 on Sunday.

Monday I read, and Jason swam in the ocean. We then drove into San Jose, which is a lovely city with absolutely no signage to tell you where you are. But after some major navigation issues (again, my fault), we found The Hotel Don Carlos. 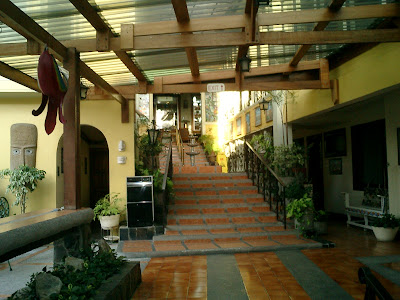 A main walkway within the Hotel Don Carlos

The hotel was a former president's mansion in an historic and lovely part of San Jose. If you want to see it, I recommend taking a cab from the airport, lest you get as lost as I got us.

We ate at a nice place up the street and settled in for the night.

We returned, taking an all-day journey from San Jose, to the airport, through Houston, US Customs (which is a separate post for another day), and into Austin.

The hardest part of the trip, by far, was being away from Jamie for so long, and unable to speak with her for several days by phone or e-mail. I knew it would be difficult, but you don't really know until you're ankle deep in the jungle listening to howler monkeys.

Anyhoo, it was a great trip, and one day I'd love to return, with all the knowledge at my fingertips that I've picked up on this go-round.

Jason was a great travel companion, so no doubt I will enlist his aid once again someday.

For pics from Jason's POV, please click here
Posted by The League at 12:33 AM

I actually thought our navigation, overall, was pretty decent for a couple of non-Spanish speaking gringos who were dealing with mediocre maps, an absence of signs, winding mountain roads, and the adjustment to reading distances in kilometers. Plus, even when we were briefly "lost" we saw some beautiful parts of the country. Let me put it this way, it once took Andy and I something like 7 hours to reach Port Aransas when driving from Austin (which should be what? 3 hours?), and we were practically in our own back yard for that one with very little traffic. You underestimate your navigation skills, Roundball.