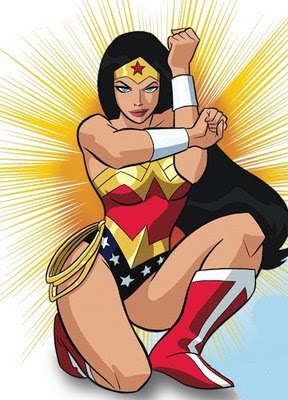 This evening Jamie and I watched the latest release from DC Comics' animated films, "Wonder Woman". It's the fourth movie from the DC Universe studios, following Superman/ Doomsday, Justice League: New Frontier and Batman: Gotham Knight. And, in my opinion, its possibly the best of four. That's my way of saying I thought the movie was pretty darn good.

Some of this is tempered by the fact that Superman/ Doomsday was a first attempt and, unfortunately, seemed to climax in the first act with the animated battle between Superman and Doomsday. Justice League: New Frontier took too many shortcuts with the phenomenal comic and Gotham Knight was a beautifully rendered but ill-executed experiment.

Wonder Woman is only adapting the origin story of Wonder Woman, which isn't terribly well known by the general public, and which has only really been refreshed once or twice even in the comics (I would gladly see an all-new origin story mini-series sometime). They've used bits of the George Perez post-Crisis on Infinite Earths reboot, the classic origin, a hint of Amazons Attack! (but don't hold that against them), and it's a nice, lean origin story. The truth is, I think us fanboys are pretty forgiving of changes in our stories if its reasonably well done, and I think this movie qualifies.

As with the other movies, this one could have stood to be about 20 minutes longer, filling in a lot of details. It would have been phenomenal to have had more exploration of Wonder Woman seeing more of New York and maybe DC, establish more about Etta Candy (I'm a fan of the Perez-era Candy), more on Steve Trevor, and some explanation of the Invisible Jet.

On that last note, I'm also a fan of how the comics portray the Amazons, which the movie does phenomenally well in spirit. I've always liked (well, since I was in college or so) the idea of an island full of heavily armed, ageless female warriors, philosophers and poets who can produce someone like Wonder Woman, and who all are her peers in spirit if not in strength. Unlike the movie, the comics have always suggested that the Amazons were not still stuck in the ancient Greek era as per technology. While they might dress in robes and wear Spartan helmets, left alone on Themyscira, they've come up with all sorts of crazy gear which suits their needs.

They don't directly address this here, but... Invisible Jet.

So having had got my geek-cred stuff covered, how's the movie itself?

Firstly, let me salute long-time WB animation star Lauren Montgomery for her directorial effort on the movie. There's a lot of love here, and Montgomery and her creative team obviously had a pretty strong idea of what was possible with the character in terms of both character and action. To cut to the chase, this movie has some of the best animated action sequences I've seen in a long while. Where Superman is a flying Sherman tank, and Batman (animated) is either a boxer or ninja, Montgomery's Wonder Woman is a sword wielding Achilles who can kick over a Cadillac. Mix that with a PG-13 level of post-300 and Lord of the Rings monsters and mayhem on the battlefield, it's some crazy stuff from the first 20 seconds of the movie. 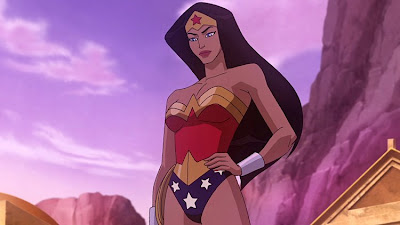 While I did wish they'd been able to fill in some of those aforementioned spots, the movie is still well written, giving Diana a chance to struggle both with her disappointment that "Man's World" hasn't improved over the stories she's heard growing up on Themyscira, and accepting the world for what it is, in part thanks to a slightly wackier-than-normal take on Steve Trevor. I was never concerned that the movie would land on some side of the coin that would over-do the possible "Girl Power" message. What could have come off as twee or hollow (see: Spice Girls + Girl Power), instead comes off as a viable way of life in the context of Themyscira and the ensuing cultural exchange. Montgomery had worked on Justice League and JLU, and is seasoned enough to know how to make the message work through character and story development rather than speechifying or dumbed-down chauvinism.

Wonder Woman, like Superman, is a very public superhero in the comics. She's not Batman skulking in the night, or Green Lantern doing his thing off in deep space. I admit I would have liked to have seen some crowd reaction to her public debut, and some hint that she was on her way to being the important public figure she becomes in the comics and in the Wonder Woman TV show. But the final sequence does suggest a future for the character (I won't spoil it), so who knows? Maybe in Wonder Woman 2?

The animation is mostly very good, with a few trouble spots (there's one walk sequence for Ares that just doesn't look good at all), and the production design is mostly very good. I'm not someone who sweats the Wonder Woman togs as being unfit for a lady unless they cut the star-spangled shorts into a g-string in the comics. That's not done here, and the minor design change, in my eyes, made total sense.

I'd heard some grumbling about Keri Russell (TV's "Felicity") as Wonder Woman, but I think we can suppose Diana is a young, young woman here. Virginia Madsen plays Hippolyta perfectly, and were this a movie about modern-day, more mature Wonder Woman, she'd have been perfect for that role, but botha ctors do their parts justice. Stand out performance from geek-girl heart-throb Nathan Fillion of Firefly fame as Col. Steve Trevor. Fillion is just plain funny, even as a voice actor. And the always great Alfred Molina plays super-nasty God of War, Ares.

The movie is about 80 minutes, and I don't think you'll be disappointed. If youa re, it'll be over quickly. For Hollywood producers looking to translate the Amazing amazon to the big screen, here's how you do it. Use the elements of the comics, check your memories of Super Friends at the door (but never, ever dismiss Lynda Carter), and aim the movie at people who'd pay to see something like Troy. Just know you're setting it in the modern world.

I picked up the 2-disc set, and haven't made it through all the extras, but it looks like good stuff. The docs on the other DCU movies I've picked up have been as interesting as the features. And with William Moulton Marston to talk about... should be fun.

If nothing else, it reminds a non-comic reading public who and what Wonder Woman is. Not some frail model or pop-singer diva or helpless princess in a tower. She's as smart as she is strong, an ambassador of peace who isn't afraid to lift a sword to protect others, and, like Superman and Batman, a character with a vast and rich story that gives the character surprising depth.

Much of my excitement with the movie comes from seeing the comics I've liked for years brought to the screen, I'm sure. But it's also in seeing it brought to the screen with such care and, honestly, being better than I expected. It's what I've liked about the character that I've tried to express to others, for years. This has been fellow comic geeks who believe reading Wonder Woman will somehow make them seem less macho, people who refuse to get past the Lynda Carter show and Super Friends, and many a non-comic reading friend who has complained that there are no (good) female superheroes.

Sure, the character has waxed and waned over the years in some cyclical fashion, but at its core, but since 1941, she's been out there. It's nice to see Diana get her due.
Posted by The League at 9:51 PM

I have it cued up on Netflix. I'm looking forward to it.

Prepare for a very long wait on Netflix.