I have long-delayed/ neglected things to attend to, such as bagging and boarding comics, putting comics in boxes, transporting all boxes upstairs to newly completed office.

Tomorrow is mid-term election day. If you're registered, go vote. 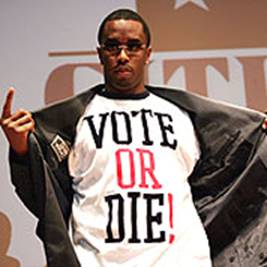 One may wonder what apocalyptic vision Diddy experienced which presaged the launch of the "Vote or Die" campaign. Ah, well.

Despite the fact that I find all four of the nimrods running for governor in the State of Texas to show no signs of actual leadership, I, too, shall be going to cast my vote for the earthling I find the least offensive.

I have never been an 11th-Hour undecided voter. I've always believed you had to be sort of goofy not to have a firm idea as to whom you would vote for pretty early on, but I guess that makes me sort of goofy. I made my decision earlier today, so I am going to vote on that and on some bond issues. Some guy named "Fred Head" is running in a nearby election. I almost jumped out of my car and stole his sign off the side of the freeway.

I'm voting now while I await the steely might of our coming Robot Overlords, who shall remove the democratic process as they make all decisions for us with their infallible binary logic.

Oh, how nice. Lucy just came in here, said hello, yawned, then went back to bed.

Due to the incompetencies of the very NON Six Sigma State of Arizona system and my insurance carrier, Jamie had to delay her sleep study. She is sleeping soundly somewhere upsatirs rather than in a room in North Austin with wires attached to her head.

In the future I shall blog upon:

Infinite Crisis: Still Smashing the Walls of the DCU
Jones Holiday Soda: Why 2006 will not see a redux
LEAGUE HOLIDAY SPECTACULAR 2006: We're Thinking December 9th. Mark your calendars.
Posted by The League at 10:48 PM