Every once in a while I get into a little tizzy about this comic or that. The League reads a big stack of comics every week, and so it's always a pleasure to read something, and then really want to pick it up again and read it all over.

But at 22 pages, usually that's not like a huge time investment or anything.

Since Siegel and Shuster were canned by National Comics and no longer were making dime one off Superman (a post for another day, or go read the heart-breaking Men of Tomorrow), comics have struggled with the business side of keeping a franchise alive without the original creators, vs. producing and nurturing new talent and new ideas.

The DC or Marvel Comics' universes wouldn't exist as a concept if, when Steve Ditko put down his pencil and walked away from Marvel, Marvel had shuttered "The Amazing Spider-Man" comic. Nor would DC (National then) have lasted too long had they decided only Siegel and Shuster had what it took to tell a Superman story.

However, dozens, if not hundreds, of new comics hit the shelf every year between the big publishers, international reprints, and small press. Very few ideas take off beyond the first issue or six. A few dedicated folks continue to put out their independent comics which lose money, or move them online. But these days, even Mickey Mouse can't get a break. Gemstone is cancelling four of their Disney titles (once the best selling comics in the US) as, somehow, the Mickey comics aren't doing it anymore.

A lot of folks have read the Pulitzer prize winning novel "The Amazing Adventures of Kavalier and Clay" (and if you haven't, go read it. No, seriously. Now. Then come back). The book was released a few years ago to much critical acclaim, but, as these things tend to do, that didn't translate much into the way of comic sales. Mostly because there had never been an actual comic called "The Escapist", just as Kavalier and Clay were fictional characters in the novel.

A few years after the novel was released, the novel's author, Michael Chabon, worked out a deal with Dark Horse comics to publish "The Escapist" comics. Unfortunately, the comics-reading world and the book-reading world once again failed to intersect, and sales suggested that "Kavalier and Clay" had been largely ignored by the comic reading audience (anecdotal evidence would suggest it was, as I think I've spoken to one other person in a comic shop who had actually read the novel. And didn't think much of it. But all of the Star Wars universe books? Boy, howdy... no problem finding folks who've read those...). 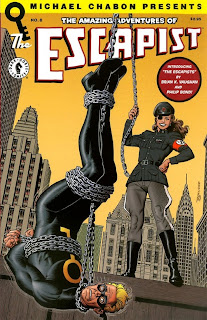 Long story short, despite Dark Horse putting nothing but all-star talent on the "Escapist" comics, sales that probably weren't any better or worse than any other Dark Horse title, not to mention a running gag of the stories presented being being reprints (with the gag only understandable if one read the novel...), and other gags that required one know a bit about the publishing history of comics, "The Escapist" didn't stay in print all that long. Fortunately, several issues were collected by Dark Horse.

However, with the final issue, the last story in the anthology was not aout the Escapist, Luna Moth or Mr. Machinegun, but a young guy in Cleveland who inherits a large sum of money and uses it to buy the rights to the dormant Escapist franchise. The story was spun off into a 6-issue limited series entitled "The Escapists".

And thus, one of my two spotlighted creators.

Brian K. Vaughan (Ex Machina, Y: The Last Man) weaves a great tale of young, starry-eyed ambition, corporate greed, surprising derring-do, unlikely friendships and the creative impulse. It's not enough that Vaughn is writing Ex Machina (surely one of the smartest comics you're not reading, JimD), he also manages to work with multiple artists to tell a wonderful story that perfectly fits the medium and works in a self-reflexive mode that I haven't seen done that well ever before. 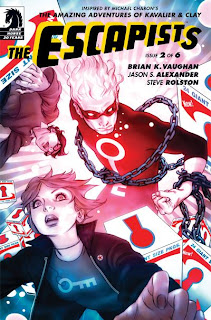 Today saw the release of the final issue of "The Escapists", and has been the case in the previous five issues, the story failed to conform to many of the comic (and, indeed, American pop-media) norms.

This evening's Creator Kookiness is a two part doozy as the final pages of "The Escapists" #6 seem to be a plea to the comics community itself to generate new and better ideas, and an indictment of corporate control and hegemony on the comic page. A worthy goal, and one that Vaughan, in his own career, has ably championed with deeds rather than words.

But then along comes Darwyn Cooke, laying two comics on me that, in anyone else's hands but Cooke or Miller, I doubt I would have given the time of day.

I am, of course, referring to DC Comic's incredibly gutsy revival of "The Spirit".

The Spirit was a never a comic book. Or, at least, it mostly was never a comic book. The title existed mostly as a newspaper insert for several years, beginning during the WWII era, and extending for decades. Each insert was usually a self-contained short story, featuring the title character, a former policeman who, after crooks believed him dead, decided to put on a domino mask and fight the weird, Dick Tracy-like criminals of Central City. The strip had several repeating characters, but is known within comic circles not just for wit of The Spirit's sometimes ham-handed attempts at justice, but also for being the playground for Will Eisner's medium-bending innovations in the sequential arts.

And if you have anything bad to say about Will Eisner, you and I shall go to pistols.

For decades The Spirit was associated with a single creative force in Mr. Eisner (some strips like "Garfield" have reportedly not been done by their original creators in quite some time). And so, any revival SHOULD be looked upon with no small amount of skepticism. 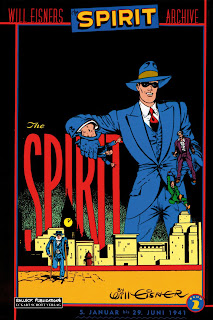 Before his passing, "The Spirit" had been collected by DC in it's high-end "Archives" format, which pretty much put it out of my price range at around $45 a collection (I believe there are 20 archive collections). DC's dedication to Eisner's legacy had also made them the publisher of reprints of Eisner's other works, such as "A Contract with God", "The Building" and "Invisible People".

At some point, Eisner must have known his legacy could continue beyond his semi-retirement, even as he was still publishing new work fairly regularly until the time of his death.

I can't be sure it was Darwyn Cooke's work on "New Frontier", that earned him the assignment, but in the last month Cooke has released two Spirit comics that I can't help but recommend.

The first is last month's "Batman/ The Spirit", which featured an imaginary meeting by Batman and The Spirit as their rogues' galleries decide to cause trouble in a neutral location. Jeph Loeb teams with Cooke on writing chores, and his knack for big, big ideas works pretty darn well in the context of such a momentous occasion.

Cooke's take on The Spirit maintains Eisner's "skin-of-his-teeth" luck and chipper attitude that made what little "The Spirit" work I've lucked into reading such a pleasure. (I am familair with eisner by way of some of his Graphic Novels, such as "The Building" and "A Contract with God").

Further, when possible, Cooke is able to pull off some of the same visual trickery of Eisner's work.

Whether he is able to make the stories of the citizens of The Spirit's world the key to the success of the newly debuted "The Spirit" title as Eisner was able to do is still out for the jury to decide. But, I think the first issue, which hit stands on Dec. 13th, is a pretty good sign that as long as Cooke sticks with the title, The Spirit is in good hands.

Circling back to my point, Vaughn may have been 100% correct in asking the comic community to honor the work that had gone before by creating new ideas. Jack Kirby asked, pretty specifically, that be how his fans honor him not by endlessly repeating the stories he'd set before (and God knows Jack was never shy that he was going to do HIS own thing), but by coming up with their own, original ideas and remaining true to them. 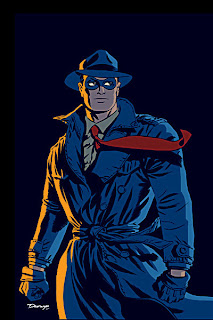 It is true that most attempts at a revival of a series do not hold the same fire as the original concept, and I think "The Escapists" tragically and accurately illustrates this point. Many "franchise" characters go through some difficult periods as creative teams come aboard that simply are not up to the task. (ie: anything Elektra without Miller's by-line).

And, had you asked me should anyone attempt to bring back The Spirit, I think I probably would have laughed.

Surely there will be The Spirit purists out there who will never accept Cooke's work, and, honestly, I don't blame them. He isn't Eisner. His work WILL be different. But I enjoyed the first two glimpses of his Spirit more than enough to see how long he can stay on before DC can't keep him there anymore.

Or until Frank Miller gets his hands on it. Then God help us all.
Posted by The League at 12:13 AM