Plus, this is The League's second favorite superhero team (no points to whomever guesses my first favorite super-team, but my third favorite... there's a good question. Answer it, and you get a Mellie) 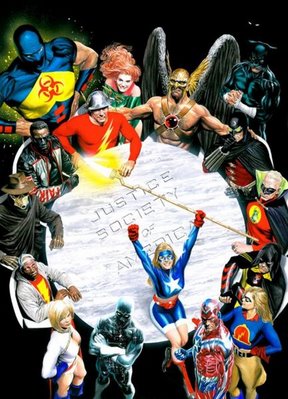 Also, while I'm bugging you...

I just received DC's "New Frontier Absolute Edition" in the mail. One of the most underappreciated comics in years. Obviously DC knew what it had, and set about getting an Absolute Edition on the shelves.

I understand a lot of readers dismissed the series when it was initially released as "too cartoony". I was actually shocked at my LCS in Phoenix that the guys behind the counter had never even HEARD of the series (way to keep up with product, fellas). The folks who dismissed Darwyn Cooke's art as cartoony missed the point. Cooke was doing retro-stylized stuff well before The Incredibles brought it to the big screen, utilizing the stylistic trappings to capture the essence of an era.

One heck of a book.

For folks looking for a Right Stuff meets superheroes... 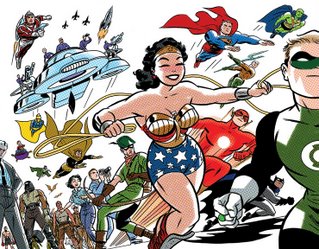 And because I'm feeling good about Darwyn Cooke, why not mention the Superman comic he's currently writing (and the amazing Tim Sale is drawing). This new series tells tales from any period in Superman's career prior to whatever qualifies as The Present.

Cooke and Sale absolutely nail an early-career Superman and the Planet staff. Also, their depiction of Lois is the rarely glimpsed version which reminds readers what sort of person would interest The Man of Steel.