Your voice will be sorely missed in the Lone Star State.

Boston Powerless before scourge of the Mooninites

It seems that electronic ads featuring the Mooninites were mistaken for bombs or something. 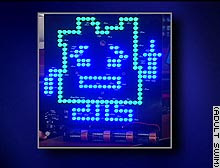 can you see this? because I'm doing it as hard as I can

The devices displayed one of the "Mooninites," outer-space delinquents who make frequent appearances on the cartoon, greeting passersby with a raised middle finger. Nine were reported around Boston on Wednesday, sending police bomb squads scrambling and snarling traffic and mass transit in one of the largest U.S. cities.

Boston police spokeswoman Elaine Driscoll called Wednesday's incidents "a colossal waste of money." She had no immediate comment on whether any laws were broken but said police would investigate further.

Thanks to an erratic schedule and my love of anthropomorphic food, I'm more than a little familiar with Aqua Teen Hunger Force. So, perhaps the APD would do well to keep me on staff for just such an Aqua Teen-related emergency, or emergencies related to Space Ghost or Sea Lab 2021.

And now, an example of someone taking out their personal embarassment as rage:

Scaring an entire region, tying up the T and major roadways, and forcing first responders to spend 12 hours chasing down trinkets instead of terrorists is marketing run amok," Markey, a Democrat, said in a written statement. "It would be hard to dream up a more appalling publicity stunt.

Luckily, I am sure everyone will maintain a level head about this.

oh, wait... They've actually arrested someone in relation to the rogue electronic signs.

I am unclear WHY the Boston police thought the Mooninites were a threat (well, I am sure the Mooninites would like to believe they are a threat). These are pretty clearly signs. I do not stop and believe every metal box I see is a bomb, but I also have not been through terror-response training.

I am sure there's a lesson here that probably could be summed up with the fact that our nation has a color-coded terror threat scale.

It's good to know that we're all now one poorly placed sign away from being charged with terrorism.

And for those of you still living in a world where you do not know what a Mooninite is:

I wasn't all that excited about DC's fill-in for February's Action Comics miss (this is after no new Action Comics in January OR February). But DC wisely put out a preview for the Annual, and it looks pretty cool.

It should be a good one for your pull list. The format of the comic follows the format of traditional "giant" Superman annuals and issues from years past, with all the different stories highlighted on the cover. (Also used in "Superman Family").

Apparently I was one of many who got bent out of shape about DC editor Eddie Berganza's DC Nation column last week.

Still, it got me some much needed traffic on Comic Fodder.

Since then I've done two days worth of DC reviews and a post on when weekly comics go wrong.

I don't think Jamie actually ever reads what I write on Comic Fodder. I saw her reading it, like, a week ago. But I think that's the first time she'd ever checked it out. It's probably good that way. I take what everyone else says as constructive criticism, but when Jamie offers me anything, I feel like I totally screwed up. I don't know what the difference is.

And it's also been a reminder that the interweb is a public place. Some guy out there refered to me as a "goon", even after agreeing with me. Apparently my prose style can use some work.


Mom and Dad, i heart you

Apparently my parents are concerned that I no longer call as often as I once did. A few factors:

1) I no longer have a 45 minute commute. I'm unemployed. I don't have a period in my day when I know I will be on the road listening to you or "Marketplace" on NPR. When I am on teh road, it's no longer a completely straight line as it was in AZ. Plus, driving and talking = dangerous.
2) I am actually busier here than in Arizona. I no longer spend Friday, Saturday and Sunday watching VH1's celeb-reality proigramming, hoping someone will call to break up the boredom. I now DVR the celeb-reality programming and watch it while you're at work.
3) You people are never home. Did you know that?
4) I am unemployed. I have very little to discuss aside from what Jason has usually already told you about. He was there for most of it.

So if I'm not on the phone all the time, I'm sorry. If I'm not here when you call, I may actually have left the house, unlike AZ.

It does not mean your younger son does not think the world of you.
Posted by The League at 6:36 PM

the movie is going to be hilarious.

Mr. & Mrs. Steans should be thankful that you call at all. My parents are lucky to hear from me once every quarter.

You know I've been reading your posts because I said they were getting really good.