Readers of LoM may have noticed I was cautiously optimistic about the recently released film "300". The movie promised to blend visual effects, historical inaccuracies, Frank Miller and a legendary tale together into a sort of big 'ol blockbuster. Whether the movie would make sense to mainstream America remained to be seen.

I have to say that it's gratifying in my old age to see the works of people I've genuinely respected for decades receiving star billing on multi-million dollar movies. Leaguers like Jason and JimD know the pain of too many hokey comic-to-movie adaptations that we all grew up with. But as our own generation takes the reigns in Hollywood, the generation which grew up on Dark Knight Returns and too many X-Men comics, filmmakers no longer seem embarrased by their own product, and are willing to take chances to bring some of the visual components of the comic panel to the screen.

And that is why 300 is a visually arresting, technically remarkable movie. However, that slavish devotion may also be why 300 isn't a very good movie.

300 is a slim volume and reads in a relatively quick time frame (your mileage may vary). I'd intentionally avoided re-reading the book since I'd heard the movie was in production, but I did recall that the story was slight and seemed more an opportunity for Miller to stretch his wings as artist. His dialogue is spare and his exposition non-existent as he cuts to the chase and got Persians and Spartans stabbing one another as quickly as possible. 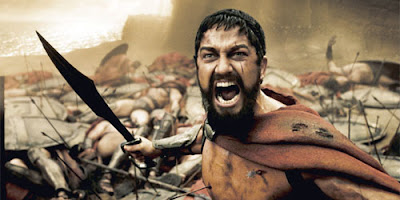 THIS MOVIE HAS LOTS OF SHOUTING!!!!

As many might now know, Miller based the comic upon the real-life battle for Thermopylae, where, legend has it, 300 Spartans and some allies faced down thousands of troops from the Persian army. I'm a history major, but I spent too little time on Greek history to relate much other than what I've read online and seen in TV documentaries. What I can tell you is that history is a mix of myth, legend, fact and fiction. But if you want to believe the histories, Leonidas did, in fact, lead the sort of charge which is shown in the film, resulting in the eventual victory of the allied Greek armies (although the Spartans would fall within a generation or two).

And, as BS brutal as the movie depicts the life of the young king, there's signifcant historical evidence suggesting that the Spartans did send their children into the wild to learn to become fighters before apprenticing as soldiers, that Spartans were much of what was represented in film and more.

In some ways, with our comfy couches, TV's and relative security, the culture of the world 2500 years ago is completely alien. Most city-states were in a perpetual cycle of war with far off lands and with one another. The value of soldiers wasn't marked with magnetic ribbons on the back of an SUV, but in hoping that they didn't lose and that you and your family weren't taken as slaves. So when I see reviews from the NYTimes having a good chuckle at this seemingly jingoistic talk of freedom from tyranny and mysticism, I can appreciate the cynicism in a modern context, but can also appreciate what I believe the filmmakers were attempting to achieve.

I'll leave it to other arm chair quarterbacks to decide if director Zach Snyder was trying to create commentary upon the world's current political status, or if it's not telling that Miller's take on the material is a decade old and remains largely unaltered. There's a lesson in there somewhere if folks want to draw allusions to a 2500 year old story.

Unfortunately, as grand in scope and detail as Snyder would like the movie to be, the film plays more like a series of bombastic set-pieces strung together rather than as a coherent narrative. Where Miller's work moves from panel to panel, Snyder has the challenge of compressing time, of working with scenes rather than tableaus. And, for reasons that become eventually apparent in the end, he inserts the seemingly most unnecessary voice over since Harrison Ford's voice over in the original cut of Blade Runner. The much commented upon violence is brutal, if often lyrical in its blood-cult presentation. No doubt the sort of thing that will have fourteen year old boys secretly practicing spear maneuvers when they believe nobody is watching. That said, the movie does show some respect for the realities of hand to hand fighting with thousands of soldiers crashing into one another and the value of a good strategy.

But that's pretty much all viewers are going to find as far as anything fantastic.

I can't help but think that had someone expanded the scope of Miller's story, had someone else directed the actors in the scenes which do not require a lot of stabbing, the end product would have been more than a sure-fire addition to the average 18-24 tear old's DVD collection. We might have got something great.

as far as the visuals... A friend of mine said he thought the compositing looked amateurish. I think he was more or less looking for something to complain about (he hadn't seen the movie). If the movie has anything going for it, it's visuals.

And, on that note... Action directors who've gone to the "up close" and lots of cuts to disguise the action (Batman Begins comes to mind)could certainly take a page or two from 300's handbook.

When the movie ended at the Westgate, we had loud applause from our mostly 18-24 year old audience. In addition, some dude was shouting "Yeeeaaahh! Yeaaahhhh!" And, a little high school girl immediately got on her phone to tell her friend "I just saw 300. It's really violent and stuff, but it's @#$%ing awesome!"

So someone's liking this movie.

I am going to take that as a compliment. I think.

Did you catch the not so subtle jab at thespians in the movie ? I don't know if there is any historical truth behind it, but the movie sure made it seem like the Spartans were offput by the buggering nature of the greeks. Not since Top Gun have gay men been so excited by a movie.
Peabo

I caught the jab at the Athenians, but missed the one at the expense of the Thespians.

According to what I saw in a lengthy PBS documentary, the Spartans men AND women were way into dudes. As with any historical topic dealing with sexuality, I think I'd want to read or hear a few more takes on Spartan culture before saying, "this is the way it was."

Interestingly, the movie did line up pretty well with what the documentary had to say about Spartan women not afraid to speak their mind in public, to the horror of visitors.