Hey, all. Welcome back to the lamest blog, ever.

Last night was surprisingly quiet. I caught up on some much needed Comic Fodder work (I mean, needed for me... not the general populace). With no Matt nor Doug and Kristen, the house was stunningly quiet. I think the dogs were just flat-out tired as they just weren't interested in harassing me at any point during the evening.

Really, not much to mention, which is why this is the lamest blog ever.

The 2004 re-appearance of Supergirl wound up looking like this. 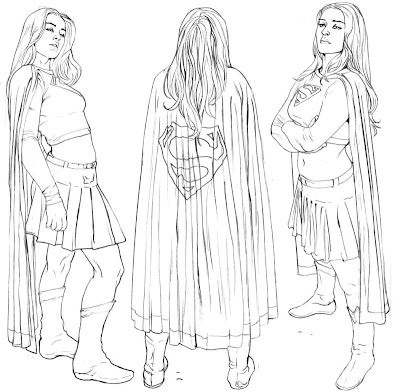 In other words, Supergirl's flailing re-launch is going to make Supergirl into a girl once again and not a bratty LA party rat. Writer Tony Bedard is also a name writer with some good stuff behind him, so I'm looking forward to the new artistic and story direction. Not enough of a change to have to write a whole story around it, but also DC isn't insisting that they're giving the readers a version of the character we want, when, clearly it is NOT the Supergirl readers want. More than anything, it's a Supergirl that fits into 70 years of Superman comics and more than fifty years of Supergirl without seeming to alter the character so radically that it's no longer recognizably Supergirl.

In addition to my usual Comic Fodder duties, I'm partnering with a gentleman from my office named Jason (no relation to my brother of the same name) to write a series of columns discussing DC's new weekly comic, "Countdown" and how it relates to DC, Comics in general, etc...

Check it out if you have the time. Hopefully the discussion will be entertaining.

I think I'm supposed to blog on some Jack in the Box commercials, but since I never saw them except on You Tube, I've not really developed an opinion of them. Sorry, team.

Lauren posted this, but it's so good, I must repost. Rejected Wii games.

Whenever I feel like comic geeks are weird, there's always Star Wars fans. 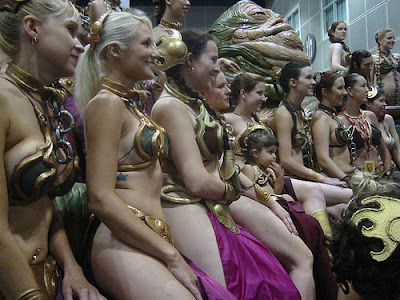 This weekend was the 30th Anniversary of Star Wars, which meant a massive Star Wars Celebration in San Diego, where they finally answered the question: No, you cannot have too many Princess Leia's.

That 2004 Supergirl looked awful! The new one looks like a cool chick that could stop bullets.

Probably because US weekly and In Touch have enough photos of her each week to make her an easy model to use.

Why is this new Supergirl so fat? With such small boobs?

I saw someone on the site you linked to posting that her skirt is an awkward length, either not short enough or not long enough.

Me, I think it looks very Catholic schoolgirl, save for the plaid. At least that's what I think the artist was going for.

Keep in mind, this isn't a costume for a movie. It's a new and somewhat temporary direction an artist is taking the character. They'll figure out a decent skirt length from panel to panel to panel. And I'm kind of glad to see she has shorts of a sort on. After all, she is flying.

In the comic blogosphere much hay has been made about the former depiction. Add in slumping sales on the title, and DC is making necessary changes. I just hope the stories are okay. I've been known to forgive some fairly dumb art if the story was okay.