I have a new car 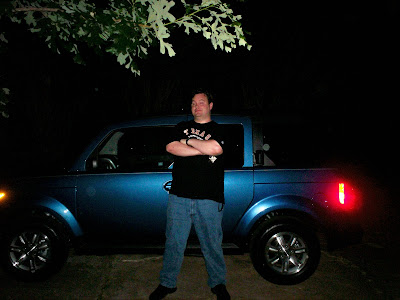 Buenos noches, little Forester. May Howdy Honda's used car department find you a rad new home where you will be loved.

I picked up the Element tonight. It's blue, as I mentioned, but the color is NOT actually described as ATOMIC blue, it is described as Arctic blue or some such... I think that Atomic thing is left over from a different model.

If in Austin and buying a Honda, let me mention that Howdy Honda not only has a great name for a dealership, they had great customer service. When at Howdy, ask for Helen Frink, super car salesperson. We like Helen.

Apparently Howdy Honda was selling a lot of cars today as the financing people were way backed up and it took a while for us to get in the car and get going. Oddly, Jeff and Keora were also there, and I think Keora was picking up a Honda Fit. I do think they were getting the car, because Jeff had that face on he gets when he's about to spend money. I saw this face many times, including when we co-signed a lease in 1996.

Anyhow, the rest of the night was documented pretty well by Jason. Go here.

I was going to call the car "Ted" in honor of slain Superhero, Ted "The Blue Beetle" Kord. But I'm not sure. Is this what Ted would have wanted? And then there's the whole fact that it's not a blue VW... I dunno. The Forester was usually The Krypton Kruiser. I need to find some other alliterative moniker or at least something which speaks about the car.

My first car (a maroon/ red '83 Honda Accord) went by The Badger, as it was dangerous when cornered. My next car, a '92 Eclipse, was called "Hero", for pulling my fat out of the fire and out of reverence for the horse of pulp hero, The Phantom.

Good choice! Does it have a cover over the back end? It looks open in the picture.

There's a black window over the back end. That's just a trick of the light.

I suggest the name "Purvis" for your ride.

Congrats on the new car....

And just because it hasn't been mentioned elsewhere.... GO SPURS GO!!!!

Great car! I believe the name will come in time.

Another good name for your car is the Duodenum Falcon.

In honor of both your historical legacy as well as your current locale, why not honor both with

How about NOT giving your car a nickname?

A cowardly idea, anonymous. As you are cowardly for failing to identify yourself.

I was actually thinking of "The Roundball Express" as well. I thought it sounded better than "The Pork Cutlet Express". 'Cause it's like you always tell Jamie, you never drive faster than your reflexes...

When some wild-eyed, eight-foot-tall maniac grabs your neck, taps the back of your favorite head up against the barroom wall, looks you crooked in the eye and asks you if you paid your dues, you just stare that big sucker right back in the eye, and you remember what The League always says at a time like that: "Have ya paid your dues, League?"

"Yessir, the check is in the mail."

I may have to go buy that movie.

And JAL, it's "Pork Chop Express."

What red-blooded, American male doesn't know that it's the "Pork Chop Express"? I just figured that since the Element was smaller that Jack Burton's rig, I'd suggest the a smaller cut of pig.

"Ok, you people! Sit tight, hold the fort and keep the home fires burning. And if we're not back by dawn... call the president."

Shoot. I just might need to call it the Roundball Express.

What about Watson? As in "Element(ary) my dear Watson..." You'll need to buy a pipe, though. And a deerstalker hat.