I know how Superman feels... 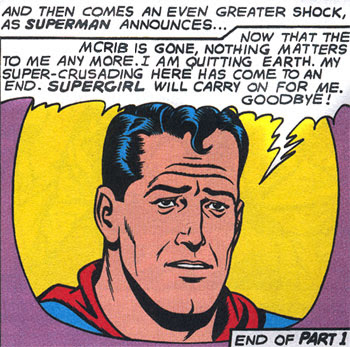 From Chris's Invincible Superblog
Posted by The League at 11:19 AM

I can only assume hangover face is a result of having gotten addicted to the processed-sugar overload that is McRib and now he's on a Kryptonian down bend more desperate than a man on a 3-day æther binge.

Just imagine the power the McRib holds over average people like myself.

This year I sort of overdid it with the McRib. It is best that it only ever comes for a limited time.

It takes a Super digestive system to digest the McRib, right? And I guess that Superman's super senses must not extend to his sense of taste....?

I LOVE the McRib. With super taste, if Superman similarly loves the McRib, it must be like tasting a deliciousness a thousand times over, loaded down with a million pounds of tasty.

If Superman similarly loves the McRib, that would be further evidence that he has taken leave of his super senses.

Maybe his senses would be so superpowerful, he would be able to enjoy every molecule of the McRib the way it was meant to be enjoyed.