I've just seen a report that Rocketeer creator, Dave Stevens, has passed after a long battle with leukemia. 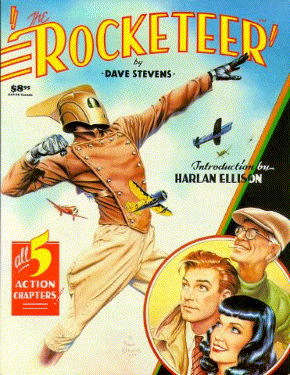 Most people will know Stevens through the movie adaptation of his creation, The Rocketeer, rather than through his phenomenal artwork. Unfortunately, its been a while since The Rocketeer has seen print.

A few months ago I picked up The Rocketeer on DVD, and wondered why I didn't own any of the comics. I noticed Stevens' website didn't seem as if it was receiving maintenance. But it was a nice reminder of the quality of Stevens' good girl art and realistic, if romantic, style of rendering. Unfortunately, it provided no clues as to further printings of The Rocketeer, nor did it suggest anything about his Stevens' health. In short, I had assumed Stevens had moved on in the art world, and was not aware of any health issues.

It would be a nice move for Image or Darkhorse to ensure that Stevens' work saw print again in order to preserve his memory and legacy.
Posted by The League at 2:28 PM