I caught Iron Man today, and I have to give it the League of Melbotis rating of: 4.5 thumbs.

My expectations for the movie were somewhat tempered by a review or two from sources such as Variety and Newsarama.com, so I wasn't too surprised by the fact that I enjoyed the movie a great deal. That's sort of been the consensus.

Iron Man is a movie with one foot in fantasy, from the science-fiction of the armor and Tony Stark's household futuristic technology to the idealistic method in which Stark is able to redress his moral failings. The other (much smaller) foot is placed in the reality of the sort of combat our soldiers are facing overseas, and the responsibilities of folks buying yachts off the proceeds from the sale of scud missles.

The effects in Iron Man benefit from the fact that the armor is non-organic and there's no fear of the Uncanny Valley. Seeing the trailer for The Incredible Hulk, just minutes before Iron Man rolled, reminded me that despite the fact that I have no idea what an 8-foot green giant looks like, I can still look at CG-Ferrigno and know that I'm watching a nicely animated cartoon. Not so much here.

There's a lot of good stuff in Iron Man, and more than being a movie about two mad scientists duking it out, or a mad scientist and Afghani boogey-men, its much more about discovery of self and super-science development. And, kids, those scenes are a lot of fun to watch.

The talent in Iron Man is actually very impressive. Paltrow's Pepper Potts refuses to be another Mary Jane in distress. Jeff Bridges is more than a cackling villain, though the script does point him in some mad-sciencey, hand-wringing directions. Terrence Howard is a good James Rhodes, but you sort of hope he gets to suit up in Iron Man II. 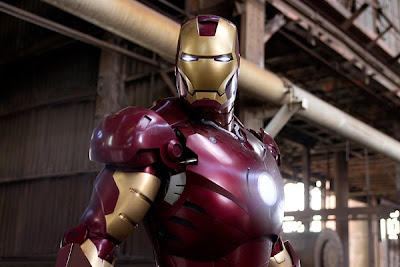 And Robert Downey Jr.? For all the cliches of the movie, Downey makes you forget you've seen this movie before in bits and pieces. His Stark is not the boring guy with the mustache who kept me from reading Iron Man in middle school (alcohol problems or no). He's a guy who has already found his place in the world, he's succeeded in the ways of the American Dream, through hard work and brilliance, and he's enjoying the hell out of it. Unlike movies like Spider-Man, which show us a character in the transition of youth, we get a fully formed character with whom we get to see the exact why's and how's of their change of heart. And, maybe, being a few years out of high school, I'm relating a bit better to Tony Stark these days than Spidey. Although, you know, without the billions and genius.

Many will find Stark's moral awakening to be a contrivance, and somewhat childish. After all, blowing people up should be considered patriotic. But I found the reasons for the awakening to be plausible beyond just the confines of the story, and possibly asking some questions that Americans assume are usually taken care of, but... you know...

Anyhow, this is seriously one of the most fun superhero movies Marvel has managed to put out in a long time. Where Spidey 3 disappointed last summer, Ghost Rider utterly failed, and Fantastic Four went to the negative zone, Iron Man was a great ride.

I'm finding I'm enjoying superhero movies MORE when I don't know too much about the characters (or, like Superman Returns, its such a departure, I have nothing to compare it to). So I get the cool superhero action (and the action in this movie is pretty good), but I also don't spend the movie figuring out how this is different from the comic.

I'm looking forward to any potential sequels. And I may give this one another round before it leaves the theaters. Kids will want their Iron Man suit this Halloween. Adults will wish they could find a way to test drive the suit and have Stark's home management system.

Oh, and nerds will want to wait through the credits for the final scene of the movie. Oh, yes. You will want to stay.
Posted by The League at 6:58 PM

Hey, I woke up this morning excited to go see this with you and Steven informed me that he never RSVPed and you already wrote a review. I thought he'd already said we'd go. Boo! *Ball whizzes by and drops on the ground*

I might be up for seeing it again. Just probably not this week.

We just saw it. I think that it is the best superhero movie ever made ( or, at least on the par of Super I ).

You know, I think it's goign to take another viewing, but its definitely going to find a place very high up on my list.

The final scene at the end of the credits made me pee all over my pants.

I hope you mean you peed in your pants. Because if you peed ON them, it would suggest you'd already removed your trousers. And I'm pretty sure M is tired of bailing you out of jail.

No, I was right. I took off my pants and urinated. I made the local news!!!

Put another win on the board for RHPT, the mad urinator of Tennessee.

I will wait for more folks to see Iron Man before speculating upon the possibilities of that ending section.

Here's one thing that bothered me about Iron Man (Randy's comments sort of reminded me of this). That suit looked incredibly difficult to put on and take off. What if Tony Stark had to pee while out and about in the Iron Man suit? What about the dreaded BM?

I'd hate to think that Iron Man is all backed up while he's out there fighting injustice.

I caught Iron Man on opening nite at the Alamo Ritz and thought it was really good. The performances of Paltrow (who for only the second time I've ever enjoyed on screen) and of course Downey are so full and smart. It was great to see quality acting in a hero movie. (I also thought Superman Returns had great acting too.) And I did not stay for the end, boo!

But a question for the League about Tony's statement at the press conference at the end: I believe it was totally in character and I loved that, but was that true to the comic? or comic superhero sensibilities?

It was true to recent events in the ongoing Marvel comic, as of about 8 years ago. And completely inline with Marvel's "Ultimate" line of comics, which has been a re-imagining of the Marvel U through a modern approach. In that series, Tony Stark has no secret identity.