Well, its been an odd week. In fact, the past two weeks have been sort of oddly... filled. For a guy who has no job, I don't feel like I've had any lack of stuff to do.

It seems that no sooner do we kick housemate Nicole to the curb (Hi, Nicole!) than we're going to rotate in pal-Heather W. Heather is a longtime associate of all at League HQ, and stood for Jamie when we got married. So we go back. She's in grad school in Lubbock, but earned an externship at St. David's this summer in speech therapy/ pathology, so she's going to be crashing in Nicole's room. I'd better wash the sheets and perform that exorcism to rid the room of the evil spirits Nicole left behind.

Last week we were fortunate enough to hang out with Letty's brother, in from Paris. We wound up first going to Black's BBQ in Lockhart (Texas BBQ Capital). A few days later, we wound up at a Vietnamese place off Rundberg.

You already know about the trip to the museum (w/ Lauren).

Friday Jamie, Jason and I went to a Round Rock Express game with my Uncle, who is in town visiting Cousin Sue. I love me a good baseball game. And I believe the magic of my rally cap was what turned the tide of the game (Express over Memphis, 9-7).

Saturday night Jamie and I packed a picnic dinenr of sorts and headed out to Zilker Park to see the Austin Civic Orchestra. The show was a lot of fun. Casual, if not informal. With the first set a tribute to Leroy Anderson. The second half was a "tribute to film heroes", ie: lets play film scores so rubes from the suburbs will come in. And, of course, I knew they were going to play Indiana Jones and Superman, and they did great with both.

I think we'll be looking at hitting their new season next fall.

This weekend we also saw Hulk, hit Barton Springs, cooked some hot dogs and hung out with Matt and Nicole. Tuesday I hung out with Uncle Donald (aka Unky D) who was in town. We caught a movie, visited a bit, and grabbed some dinner.

All in all, a pretty decent few days.

Sadly, performer and dancer Cyd Charisse has passed away. 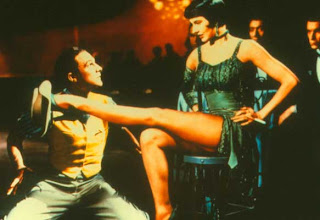 I only really know Ms. Charisse from one movie, "Singin' in the Rain". Which is, btw, one of my favorite flicks. In no small part because of Ms. Charisse. And if you have to ask why I like Ms. Charisse, well...

Try The Band Wagon next for more Cyd Charisse. In "The Girl Hunt Ballet," when she takes off her dark green jacket to reveal the red dress beneath... wow!

I looked up the sequence on YouTube, and, well... my goodness.

You know, I just recently watched "An American in Paris" and thought "What a bunch of nonsense."

The dancing was great but the scriptwriting terrible. I swear, you might have thought that the director of the movie had no familiarity with the true relationship dynamics of heterosexual couples!

I have not, sadly, seen "An American in Paris". But I shall.

If you're looking for reality in an MGM musical, you're barking up the wrong tree...