I'm going to go ahead and put a disclaimer on this one:


1. I find this whole enterprise kind of embarrassing for reasons I cannot begin to articulate.

2. Ladies, if you value your own sanity, it might be best if you sat this one out. You're not going to like this post one bit. Any reading you do below, you do at your own risk.

3. This whole thing is pretty spoiler-laden. I wind up accidentally giving away a lot of plot on all movies/ characters discussed.

Historically, the first robot lady of interest that we can probably trace back to in Western Culture is probably Galatea, the woman brought to life by Pygmalion from a statue. There are all sorts of contexts in which the story is reviewed, some more flattering than others, and most certainly influenced by both the intention of the teller of the tale's vision (romantic tale, tale of hubris, etc...), and certainly the popular view of gender relations in which a tale is told. In today's society, it may seem difficult for readers to get past the easy reads of Pygmalion's misogyny that the story hinges on.

But more to our point: Sexy Lady Robots.

The first of which I can probably think of in film would be Fake-Robot-Maria from Fritz Lang's "Metropolis".

Basically, it's the future and all the rich folks live in palaces miles above the Earth, while everybody else toils below. Maria is a community organizer of sorts who is giving the worker bees hope (and a rich dude falls for her). An evil scientist guy has built a robot to take the place of his lost love, but disguises the robot as Maria, who he's kidnapped.

Anyway, instead of whining about the poor, Robot Maria ruins Human Maria's credibility as she ascends to the towers of the rich and parties it up. Actress Brigette Helm plays both roles (evil and good Maria) exceedingly well, and sets up Evil Robot Maria as a Robot Lady of Interest (RLI) as early as 1927. 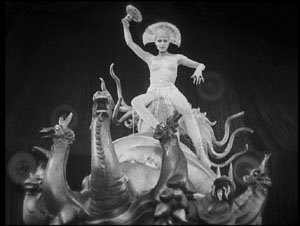 I don't know how hard you have to party before you wind up in this situation, but that robot is programmed to get her crunk on.

Keep in mind, the term "robot" came into the parlance as late as 1921 thanks to Czeck playwright Karel Capek's play "Rossum's Universal Robots". It's generally thought to be the first appearance of the word "Robot", although "automaton" had appeared previously.

Depending on your definition, one could also include Elsa Lanchester as "The Bride" in 1935's "Bride of Frankenstein". I'm mostly including her because, due to the hair-don't the Bride sports, Lanchester is often overlooked.


Made for each other?

I'm not as familiar with pulp science-fiction as I should be, so I'm going to leave a big old gap here that could certainly be filled with all kinds of paperbacks and magazine stories about robot love.

1973's "Westworld" featured life-like robots which would join in all sorts of adult shenanigans with the tourists. Yeah, I found that a little yicky, even as a kid when I first saw the movie. But if you make it through that portion, the movie gets really awesome really fast.

The 1975 film "The Stepford Wives" is a bit of weirdness we can all enjoy (I've not seen the remake). A movie that's a refelction of its time, the Stepford Wives big reveal is that the reason the wives seem so perfect in the Stepford enclave? When the wives become problematic, the husbands replace them with robots.

So, basically, yeah, it was a horror movie for NOW-era feminists, with a less abstract threat to represent the specter of the lives many felt would be foisted upon them if the push for women's lib wasn't successful. Just, you know, in a cheesy way, with robots. But there's a reason the term "Stepford Wives" is ingrained in our vocabulary. Worth checking out.

The 1980 film Galaxina seems to include a robot who is intended to be eye-candy in what seems to be a comedy. The titular character was played by the lovely, but doomed actress/ model Dorothy Stratten. I've never seen the film, so I don't have much to say about it. 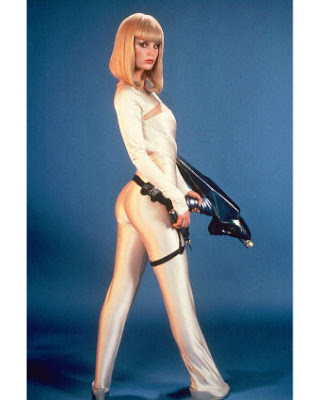 I haven't seen the movie, but here's a pretty strong pitch for checking it out.

As I write this, I realize Blade Runner should really get it's own post, but what are you going to do?

Blade Runner features several androids, including Rachael, Pris and Zhora. If you don't know the plot, (a) I pity you. Get a DVD player. (b) It's about a detective who must track down several renegade "replicants", basically flesh and blood robots with pre-programmed minds and a four-year lifespan. One of my favorites of all time.

Pris was played by Darryl Hannah, who... well, who did all kinds of crazy film work in the 1980's, but whose profile dropped a bit in the 1990's. I'm not sure why she isn't used more. She's lovely enough without a mermaid tail, and I always liked her. But what do I know? (answer: nuthin') 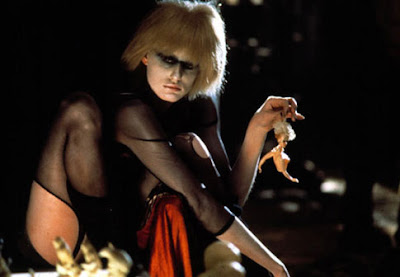 We don't know why it works. It just does.

Zhora doesn't get much screen time, and viewers may note that she looks particularly weird during her death scene. Well, that's some stunt-person in a fright wig and plainly not Joanna Cassidy. According to sources I've read, documentaries, etc... nobody was happy with how that turned out. But when you're watching the scene, she looks so weird during her death, its kind of disquieting.

Before that sequence when she's talking to Deckard... maybe less disquieting.

I'm not sure if she's a robot, but she is some sort of computerized artificial construct, right? Anyway, kudos to John Hughes for one of the weirdest and oddly non-skeeviest teen comedies (that, from its premise, should have been in there with "Hamburger: The Motion Picture").

"Lisa" (probably named for Apple's early-era personal computer) was the result of two nerds' hacking back in the 1980's when computers were about as accessible as atom smashers. Thank God for icon-based interfaces, says I. Back then, it seemed entirely reasonable that two motivated teenagers might accidentally create Kelly LeBrock on their computer while their parents were out of town. 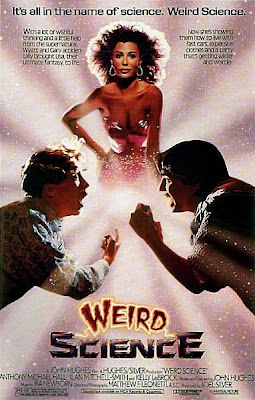 If you've never seen "Weird Science", it's a teen-classic. We'll revisit this movie some other time, because, darn it, I love "Weird Science". And Kelly LeBrock. Who unfortunately was married to Steven Seagal for a while. What must that household have been like?

Nevermind. I don't want to know.


That's it for this installment. More later this week. We'll get to BSG, Terminator and more.

I like the inclusion of The Bride of Frankenstein and Lisa. Not exactly robots, per se, but the theme is about the same. Yes, I'm sure there are some obscure, or not so obscure, 1950's sci-fi lady-bots that I'm not aware of either. You'd think the era would be ripe with them.

I await the next chapter in this post, almost as much as I await Jamie's "she said" rebuttal, which I fully expect to be titled "Robot Hunks."

I think I smell a roboriffic double feature.

You find the movies, I'll bring the popcorn and liquor. Lots and lots of liquor.

Darryl Hannah made me feel funny in my tummy.

I think I'll have to sit this one out, considering the unfortunate dearth of hot male robots in movies and TV. Maybe I just can't think of any right now, but it's usually:

I know we haven't gotten that far yet, but be careful not to overlook Winona Ryder's appearance as a robot in Aliens 4. Although she's not all that sexy in that movie...

Jamie, you at least gotta give a nod to naked Arnie for tromping around and showing off his junk in two different Terminator movies. And what about Robert Patrick? Plus, you've got that hunky Bent Spiner of Data/Star Trek fame (who, I believe, actually had robot sex on one episode), Jude Law in AI, and several dudes from BSG who play Cylons (I don't know who most of them are, but you've got that sexy, sexy Dean Stockwell as one of them). Barret Oliver was a little young to be a sexy robot when he appeared in D.A.R.Y.L., but there might have been a few geeky preteen girls who had crushes on him.

and Robin Williams in Bicentennial Man.

I know you guys are trying to be funny, but you're also proving my point.

Jude Law, yes, and I forgot about Robert Patrick, but even that's kind of a stretch. Honestly, Arnie never quite did it for me.

I *would* like to thank Sarah Connor Chronicles for keeping Chromartie around, though.