Eartha Kitt Merges with the Infinite

Eartha Kitt, actor, singer and part of the Bat-firmament as one of three talented women to play Catwoman in the classic Batman television program, has passed away. 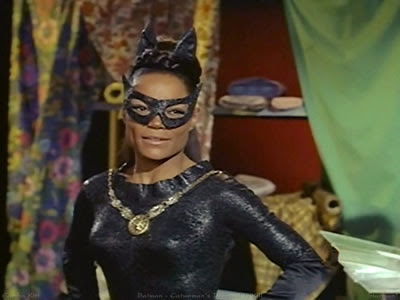 Kitt is also known for her version of "Santa Baby" (if you're hearing it on the radio or at the mall, that's Kitt's voice). She had a long and prolific career, including, I recall, cabs in New York on the 1990's using a pre-recorded message from Kitt asking you to buckle up (I still recall turning to Jason in the cab and blurting out "That's Eartha Kitt!").

Kitt never seemed to lose her joie de vivre, and never minded talking about either "Santa, Baby" or Catwoman. She'll be missed but not forgotten.
Posted by The League at 12:29 PM