Amanda Waller. Sounds like the name of someone who might have graduated with you from high school, maybe even rode your bus in middle school.

In DC Comics, the face of power is not that of a certain spit-curled Kryptonian, nor does the image of a cunning mind necessarily belong to a certain pointy-eared detective. Instead, for those of us who pay attention, we know that the toughest-minded, often most heroic person (and often the most stubbornly linear minded person) in the DCU doesn't wear tights, but skirted business suits.

I really have no idea where Amanda Waller first appeared in DC Comics (I think in Legends), but she came to prominence in the pages of Suicide Squad as the iron-willed bureaucrat who wasn't afraid to break a few eggs in order to get an omelette. Namely, she coerced villains of the DCU into doing Uncle Sam's dirty work as a black-ops super-hero team, Task Force X. Succeed in your missions, and get part of your life sentence commuted. Fail, and you'll most likely die somewhere in a foreign land with the US Government denying any knowledge of your existence.

Neither good guy nor bad guy, but always interesting. 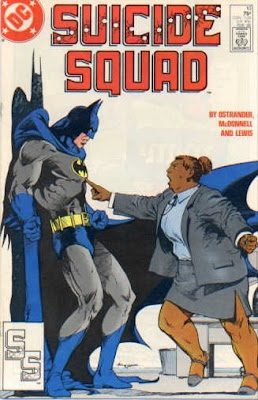 Waller has a "chat" with Bats

In addition to running Task Force X (aka: Suicide Squad), Waller pops up in other sort of sketchy Government-run superhero related programs, from UN peacekeeping force Checkmate to all-purpose "we're doing it for the good of the people, whether they like it or not" secret-ops G-Man.

Waller is an intriguing character not just because of her moral complexity, but because she seems 100% feasible. We've all known or met someone who is infinitely smarter, more determined and utterly un-selfconscious about making difficult decisions. In her own way, she's in the same league as Lex Luthor with both ther intellect, drive and concern about the balance of power regarding those caped wonders. Often, Waller plays the voice of a nervous government that would be reasonably concerned about the tight-wearing heroes zipping about the skyscrapers of the DCU. It's an odd bit of semi-realism for a world with Kings of Atlantis and men in red tights outrunning fighter jets.

To give you an idea of what one might expect of Waller, let us compare her to Marvel's Nick Fury if we want to talk G-Men.

2) Nick Fury + paper work + budget meetings = chomping a cigar, then complaining loudly about about how these suits don't "get it", and then maybe shooting someone just to meet the day's quota of super-spy action

Waller represents the extremely difficult situation people would find themselves in the DCU. She does not have Superman or Wonder Woman's awesome powers. She does not have Batman's lifelong martial and detective training (but probably his mind and a parallax version of his insight). She doesn't have the luxury of confining her battles to simply taking down the Joker, not when she's playing for keeps in an international arena. We now have series that look at what happens when Superman and Batman decide to play in the same area (Authority, etc...), but that's not the world of DC Comics. And whether or not I agree with Superman's moral code (I do), most others do not, will take advantage, and most people don't have Superman's luxury of bullet-proof skin and eyeballs.

And while she's often squarely in a morally gray area, smart writers like Greg Rucka have used her as an example of the arrogance of American power in international organizations when she was made, pretty clearly, a villain in the superlative Checkmate series as she attempted to maneuver Checkmate into her control/ American influence rather than as the multinational peacekeeping force it was intended to be. And she went down swinging.

But, anyway, when push comes to shove, Amanda Waller is the sort of person you want at your back in the DCU. 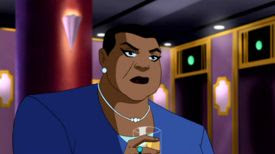 Waller was also featured in the JLU cartoon as head of Cadmus, a Government organization researching (and cloning) meta-humans. Her inclusion in the series was absolutely brilliant, as was her voicing by CCH Pounder. Originally positioning herself against the Justice League, they eventually teamed up to fight the unenviable foe of a merged Luthor and Brainiac.

Here's JLU plus Waller in action.


By the way, that episode just gets crazier from there...

And now Mattel has announced that they will be creating an Amanda Waller action figure to go with the line of JLU toys I sort of collect. It's a testament both to Waller's popularity and to Mattel's joy at tackling some of the DCU's less well known characters with the the still functioning and relatively inexpensive JLU line.

Finally, an action figure of a bureaucrat I respect and admire
Posted by The League at 5:49 PM

Amanda "The Wall" Waller is one of the best characters in the DC Universe. The way that Rucka handled her in the now canceled Checkmate title was awesome. She is a very believable character which is what makes her so interesting. In a fictional world where superheros are almost universally accepted I find her attitude refreshing. I mean if super heroes were real the government would be looking for some way to control them.

Oddly enough I did not like her portrayal in the recent Ostrander penned Suicide Squad mini. Her hands on approach with Chemo seemed out of character to me.

Hoo yeah, that was one crazy JLU episode.

Really great to read this post. I'm a big Amanda fan too.

by now, i'm sure you've heard of the plans for a Suicide Squad movie franchise... hopefully Amanda Waller has a role in it. the lady who did her voice in the cartoon would be a great casting for the part!

i need to watch the rest of that cartoon! that was gonzo!
great post.
peace,
samax
ghettoManga.com

Hey Samax! Justice League might be on iTunes now. She's all over the show.

I am THRILLED to hear about the Suicide Squad movie. I agree with your casting suggestion. She's not in enough stuff.

As per other Squad folks: You have to have Flag, Bronze Tiger and Deadshot or it won't be the same.

that's almost EXACTLY what i said on my blog (i forgot about flagg). there's a million reasons that i'd like to see a good suicide squad movie, and those particular characters will translate for the big screen. it would be cool for the super-powered characters to keep dying while the skilled humans keep surviving!