So, in case you missed the various info out there, on Sunday, I hit 34.

I can no longer say I'm in my early-30's without fibbing. I am very close to my life expectancy, were I to be living in the mid-19th century.

I'm not much of one about my birthday, but last night we got together with some friends at Serrano's, down off Red River. The past few weeks have been odd as Matt contracted strep, which he passed to Nicole. Lauren wound up with appendicitis, requiring hospitilization, which meant Steven picked something nasty up at the hospital, which was, I think, also strep.

And, sadly, Juan and Letty are now both fighting strep, too.

So we were sort of thinking that last night would wind up as a small affair (which Jamie wrangled. Thanks, Jamie). And it was, just a few folks. But even a good number of our patients showed up, with a special celebrity appearance by Lauren. Still am so happy she's feeling good enough to walk around a bit and spend time with friends.

Also thanks to friends who've chimed in via e-mail, Facebook, etc...

I have decided that the only promise I'm making myself is that I will finish reading "Moby Dick" before I'm 35. I've never read the book except as a Classics Illustrated edition with art by Bill Sienkiwicz (still one of my favorite artists, period, comic or otherwise). But I figure I should probably read the thing as Mellville intended before I'm dead.

I already bought myself my birthday present(s). Every year I buy myself something, and this year it was two novelty t-shirts. One with The Flash, and one with, of course, Superman.

I'm not entirely clear on whether or not being in one's mid-30's is supposed to mean I'm supposed to shelve some of my goofier interests, put on a sweater and slippers and... wait. Do I see approaching middle-age as becoming Mister Rogers? I believe I might. But, for goodness sake, Mister Rogers had a whole crazy land of make believe with sentient trolleys, a lush named "Lady Elaine" and talking owls and kittens. Mister Rogers was awesome.

Happy B-Day to me, I suppose. 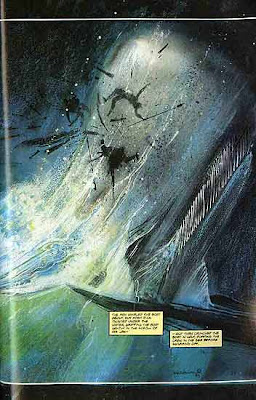 Well, I'm willing to take a stab at reading Moby Dick along with you if you take a crack at it (I've only read the Cliff Notes). AND, I don't think you should give up anything upon turning 34. I think you should focus on embracing the things you really love. Go dog go.

The copy I bought was $5, brand new from Bantam. I guess Mellville isn't still picking up royalties?

Anyway, sure. I read to page 57 or so. I can wait for you to catch up before moving on.

And, yeah, I don't think I'll be intentionally giving much up this year, so we'll see how things shake out. Hoping I get a talking owl...

I read "Moby Dick" when i turned 30, after a high school english teacher had said it was pointless to try before you're 30. It rules, with or without Bill Sienkiewicz art.

Oh, and you have to get a copy of Mastodon's "Leviathan", which serves as heavy metal cliff notes.

You know "Wrath of Khan" is all about Moby Dick right? Just like the original Khan ep was "Tale of 2 Cities"

So yeah, you can read Moby Dick in the intersection of comics, heavy metal, and Trek. What's not to like?

34 is YOUNG!! Trust me :-) I'm waiting for Moby Dick Classics Illustrated to be republished over here, the full book is still a step too far, even though I'm a bit past 30, and an avid reader of all things. I reckon 60+ for that one.

Thanks for the well-wishes Fantomenos and Wilson. I look forward to plowing ahead with the book. We'll see if my peanut brain can grasp the whole thing. But I will check out the album and keep Trek in mind while reading. I guess maybe that's who Khan was quoting with "from the heart of hell, I stab at thee"? Interesting.

Wilson, best of luck on the reprint! Most likely just a matter of time.

I read Moby Dick in high school. It's really not that hard, just longer than most people ever usually want to attempt. Frankly, about a quarter of the novel isn't really important, it's chapters on the whaling industry with hardly a narrative. The second half is when the novel starts going into all whale vs. man, allegory of implacable nature and the vengeance stuff.

If you're going to make a Star Trek reference with Moby Dick, how can you leave out Star Trek: First Contact?

Yeah, Khan quotes Ahab a bunch, but there's also subtle stuff like how Khan thinks like a 20th century captain and fights in 2-d, so the (white) enterprise attacks from underneath him...

NTT, feel free to chime in on "First Contact", I don't think I've seen that one.