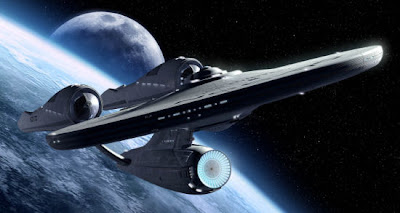 So, okay. I really liked the new Trek.

There's a lot of plot and story issues with the movie, I'm not going to fib. Characters' motivations don't make sense (especially our villain, the catalyst for the plot), and its sort of derivative. And, if what they did is what I think they did, it would give longtime Trek fans a long, long moment of pause.

If you're like me and felt the past ten years or so of Trek has taken a turn for the not-so-great, and you never quite got over the original series, then this is a welcome change.

Prior to the new movie, I watched "Star Trek: The Motion Picture", the Alan Dean Foster penned, post "2001: A Space Odyssey", post "Star Wars" relaunch of the Star Trek franchise. And the differences between the two movies really couldn't be more pronounced in structure, pacing, philosophy, etc... The new movie is much, much more in the vein of the high-octane action movies of the past few years that had left the Trek franchise limping pretty far behind.

The movie does do a great job of introducing the characters and distilling down a lot of character bits developed over the decades into one cohesive narrative. There may be new actors in the Starfleet uniforms, but the writers were pretty intent on making sure that the characters that they'd loved for so many years are still intact, even if its coming from a slightly different angle. This most likely won't throw off too many viewers, what with the relaunch of other popular franchises of late, from Batman to James Bond (and us comic fans are very, very used to the whole "Earth 1, Earth 2" concept. As Trek fans should be, from "Mirror, Mirror".) 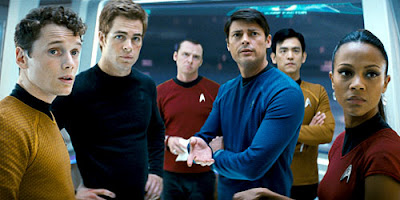 The story moves at Warp 10, so its possible to miss the plotholes and/ or not care too much about them. And... this should give you an idea regarding how pleased I was with the movie, it really doesn't matter a whole lot whether the plot adds up or not. The movie isn't here to spin a crazy new plot for the Star Trek franchise, its here to get a new generation of viewers hooked on the antics of Kirk, Spock, Bones, Uhura, Sulu and the rest.

One of the things I'd loved about Star Trek: The Motion Picture was the scale of the thing. From the interior of the Enterprise (something rarely explored, and - oddly- not emphasized much in any other incarnation), to the vastness of space and the possibilities for craft size, etc...

While the FX of ST:TMP still hold up, the new film takes advantage of the power of CG in a way that the past fifteen years of Trek have struggled. Its a really great looking movie, even if the battle scenes do become a bit unnecessarily chaotic at times (but less so than the average Michael bay travesty).

The interior of the Enterprise, etc... actually makes some sort of sense and the designers must have considered what actual engine rooms on battleships, etc... look like, rather than just imagining a living room with glowy things. And the bridge is representative enough of the classic bridge, with what seems like a reasonable update in technology, etc...

I was genuinely pleased with the performances of everyone, even when a few scenes may have gone a little slapsticky for the Trek franchise. But it also generated humor in a film that wasn't going to count on laughs just from a fawning fanbase laughing at some insider joke.

It's a fast-paced popcorn flick that does its job admirably. And, after having paid the same amount to see "Wolverine" last week, I can verify that you could do a lot, lot worse.

Whether or not they dug themselves into all kinds of complications for a sequel remains to be seen. They certain had enough issues with the plot, how they handled... ahem... different versions of characters, etc... could be incredibly problematic. But I don't want to assume the worst until we get another installment.

For more, I recommend reading Jason's spoiler-rific review. Also, my rundown of my moderate Trek fandom.
Posted by The League at 9:57 PM

Whoops. Didn't mean to erase my previous comment. To summarize- I liked the movie, but I somehow feel a little hypocritical in saying that. I think the Abrams is getting off the hook pretty easy given some of the very questionable plot developments in the flick (I guess we only care about plot when we don't like the characters?). Also, my review alluded vaguely to a few things from the film in order to further the discussion (after giving a spoiler warning). I'm not sure it was spoiler-rific (although it was clearly a far superior review in comparison to this one).

Whoop. No criticism meant by being "spoiler-ific", but I did want to warn people before they hopped over that you were discussing the plot, and that's fraught with perhaps giving away something, somebody was trying to avoid knowing before walking in to the movie.

And it IS better than mine. Note that I linked over ot it.

I was kidding (mostly). You take the fun out of picking on you when you act all civilized and nice and junk.
Anyway, I tried to limit the info in my review to stuff that I had already heard about before going into the movie (after having tried to avoid spoilers myself). Maybe it was a subconscious "misery loves company" reaction.

I really enjoyed this movie. It was fun. It was fast. And my good friends became young and shot phasers at things.

I am well pleased.