There's been a load of speculation about the 600th issue of Captain America that was released today (two days earlier than the normal comics' delivery day each week). Looks like that speculation can come to an end.

A couple of years back, Cap was shot on the steps of a court house in NYC, and keeled over dead. Since that time, former protege Bucky Barnes, his WWII-era sidekick turned lethal assassin, had put on the cowel, picked up the shield and done his best to fill Cap's boots. What should have been some serious comic-book hackery has, instead, been some of the best storytelling in the Marvel U that I'm aware of (in my humble opinion). Its just been great comics.

Marvel has been happy to try to play up any minor event in their comics in the major news outlets, and did so again today to coincide with the release of today's comic.

I can say no more, but there's a major spoiler after the jump.

Superman Back in the Newspaper Biz

Simon reminded me, so its in the post tonight!, that the upcoming Wednesday Comics from DC is not going to just be appearing in comic shops. DC is taking the format, which I've actually criticized as a throwback, and moving forward to the future for comics. The weekly comic is in an old (very, very old) format of the newspaper broadsheet, with something like a page or two of the story being released each week. Sort of like the old Little Nemo comics or a Flash Gordon comic.

And, yeah, its only a 12-week thing, but I think that's just their test period for both print and online. Oh, and here's some preview art for Wednesday Comics.

BUT... DC is going back to the future. They're also syndicating to USA Today online. What this means is that DC is finally, finally getting online.

I think this is a cool opportunity for DC to dip their toe in the internet waters with their major characters. Sure, I think they should be moving their entire library online, but... babysteps. AND, you guys will, I assume, be able to read at least the Superman comics, and maybe a whole lot more!

Anyhoo, here's the story from USA Today. And here's the DCU Blog article. 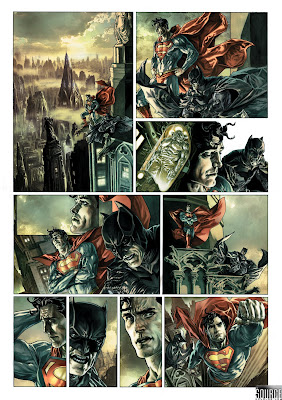 click for a bigger image. See Supes and Bats in all their glory!

Like most kids born after 1935 or so, Donald Duck was an ever present force in my formative years. The pantsless sailor duck was a welcome face on our TV screen and during the occasional 16mm film at school. 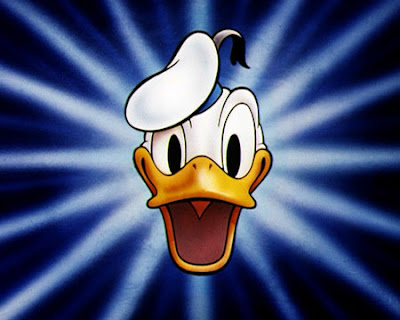 I don't want to take anything away from Donald, but I do remember being maybe a little freaked out by his rage attacks as a kid, and was probably 5 or 6 or so before I found them funny and realized they were intended to be wacky and not vaguely threatening. I think I thought of Donald as an adult, and when adults flipped out when I was very little, I sort of flipped out a little on my own. 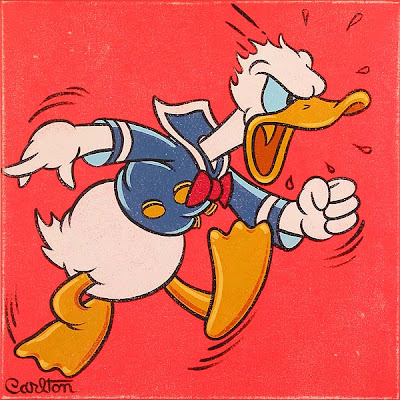 It was the Chip'n'Dale/ Donald stuff that I think won me over.

And here's a favorite:


Dude! There's a ton of Disney stuff on YouTube!

Anyway, who doesn't love Donald Duck? I sure do. And just to make matters better, the Duck comics from Disney are something I read from time to time as an adult, so Donald is still with me today, in a slightly less animated form.* Like many, having grown up with Disney characters as such a big part of our entertainment, I may not have a sense of ownership of the characters, but Disney's attempts to make me think of Donald, Mickey and much of the rest of Disney characters as pals has completely worked. When we went to Disneyworld in 2000, I got weirdly excited about having my photo taken with characters, and had a repeat in 2002 or 03 when I attended a conference at Disneyland.

Happy Birthday, Donald! Perhaps this 3/4's of a century, someone at Disney will buy you some pants, pal.


*I think Boom! just landed the Disney contract, so expect more Disney comics soon, if true. At a reasonable price, too!
Posted by The League at 8:52 PM

1) I actually hope that Steve Rogers doesn't come back to life and become Captain America once again. The Winter Soldier/Bucky Barnes stories have been awesome and I think we need some more of him before Steve gets resurrected. Sadly, I don't think that is what we are going to get that as Marvel will want to re-establish the Steve/Cap before them movie is released.

2) I've pre-ordered the first 8 Wednesday Comics issues as they look absolutely gorgeous. This is a departure from my usual trade waiting.

3) Donald Duck is the man! One of my all time favourite comic characters. I loved watching the shorts as a kid and resented that he didn't get as much attention as Mickey Mouse.

I just got my copy of The Life and Times of Scrooge McDuck and I can't wait to re-read all the stories and read them to Anna for the first time. The Donald and Scrooge comics were a staple of my childhood reading habits. I'm so happy to hear Boom picked up the Disney license after Gladstone went out of business.

Donald is the Disney character I most identify with, because although I'm mostly mild-mannered, I sometimes wind up like the Duck.

Chef Donald is my all-time favorite Donald Duck cartoon. I love it all the way through, but two wonderful moments strike me (see YouTube clip): the way Donald poses at 5.49, followed by his run across the room.... and his reaction at 6.15, which is me, at work.

Hey, in those Batman and Superman frames from this post, are they breaking up?

Man I love DD. I loved his freakouts, his voice, everything.

He cooked a plane!

That's not funny. Batman really hurt Superman, and this time I'm not sure they'll patch it up.

Yeah, Simon. I don't know what to tell you about Cap. Marvel does what Marvel does. I think all I can do is ask that Brubaker does the best job possible.

I am all over Wednesday comics. I even pre-bought some "Life Magazine" sized bags so I could try to keep from mangling them when I store them.

I'd also look for the Gemstone best of Rosa and Barks collections. There's 3 of them at around $9 a pop. I know you and Anna will have a huge blast reading them.

Its too bad Disney can't find a way to get shorts in front of their films these days. It seems like people would be all onboard for more Donald.

Pixar is so great about the shorts, though Disney has produced a few gems in recent years. Not sure if it ever played theaters, but did you see The Little Match Girl?

I did not. I don't see many Disney movies in the theater these days, and I think that's where they show.

Here it is -- it makes me cry *sniff* : http://www.youtube.com/watch?v=kkoaFT-Oc-U&feature=related