When I was 15, Jason talked me into renting Fritz Lang's 1927 science fiction opus, "Metropolis". I was, of course, immediately disappointed to learn that Madonna's "Express Yourself" video was not a concept baked entirely new for The Material Girl. Instead, the creative team had told a sort of parallel (and sexier) story to the happenings of "Metropolis", in the same landscape.

At any rate, I doubt I'd ever watched an entire feature silent film prior to that cut, but as I recall, it had some pop songs on it, and, of course, even on VHS the movie was brilliantly stunning and the story moving.

I don't really want to get into a whole conversation here on German Expressionist film of the pre-Nazi era, and how one of the seldom-mentioned casualties of Hitler's regime was the crippling of an entire media and art form. But there you have it. While I do enjoy some American and British silent film (like all good former film students, I appreciate me some good Buster Keaton and Chaplin), I'd argue that anyone watching Metropolis will be awed at how far ahead of Hollywood and London that the German's were in using the medium. 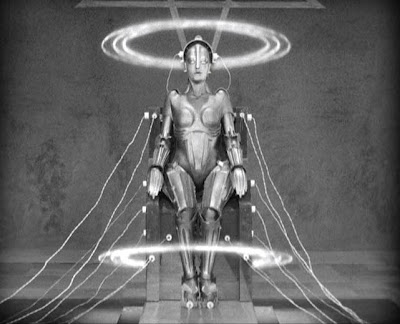 It's also impossible to separate Germany's post-WW1 conditions with the output of their cinema, and not wonder a bit about what Lang saw in his countrymen in the years prior to the rise of Hitler. Or his refusal to allow the film's resolution to make a solid case completely on the side of beleaguered labor (what with the Reds running around Mother Russia).

The dimensions of the movie are huge, even by today's standards. And while sets are necessarily re-used for the story, they're unbelievable in scale and practical effects, number of sets, etc... The models of exteriors are phenomenal, some scenes that I assume are matte prints continue to astonish, and the cast is enormous. It's tough to believe such efforts used to go into moviemaking, but clearly Lang wasn't cutting corners. 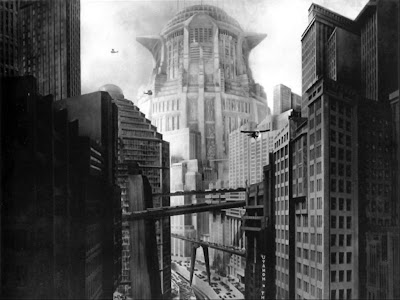 The imagery has, of course, become iconic and endlessly emulated in sci-fi films, in comics and elsewhere. Lang's Metropolis would come to define the massive super cities seen in everything from "The Fifth Element" to "Blade Runner", acknowledging that these cities will grow on the backs of a labor class who will most likely always have the short end of the stick. The glories of the towers and the miseries of the folks below would become a perennial theme in science fiction, and, one can see how the first quarter of the 20th Century would be enough to tell you where this was headed. The predictions for technology aren't as important to the film as the homily shared using the backdrop and extremes of the future presented in the film.

The effects are mostly practical and hold up because Lang's grasp didn't overextend his reach. The Man-Machine's metal body looks exactly like what its meant to look like, the flying machines and cars don't take bizarre shapes. 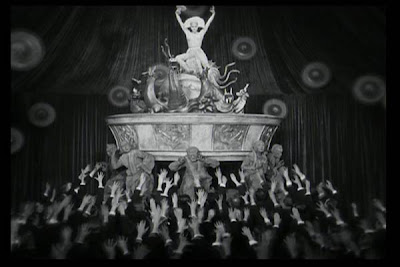 why is evil always more fun and noticeably hotter?

But what's just as striking are the hallucinatory visions experienced by Freder, including the approach of "death". These scenes are a fairly straightforward moment when Lang's involvement with Expressionism crosses over into the Metropolis.

And, curiously, its funny how different the same actress is as Brigitte Helm as "good" Maria and "evil" Maria.** While acting styles have definitely changed for film in teh ensuing 80 years, the actors are still committed and engrossing.

We lost a few things when they added sound to film, but nothing so much as the possibilities for a film to easily cross borders, simply applying new title cards.

My hat is off to the Golden Hornet Project. A friend at dinner asked if they're an offshoot of Austin's "Golden Arm Trio", and I really don't. But the band/ orchestra/ whatever was made up of about 8 musicians, featuring keyboards, two percussionists (phenomenal percussionists), and several strings and guitar players. I am actually very interested in seeing their other work in town this summer. 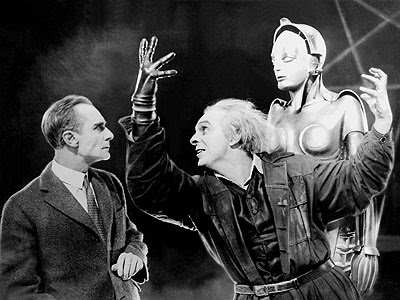 seriously, when was the last time you got this excited about one of your ideas?

The score was terrific, going above and beyond the call of duty to execute upon their task: helping to tell the story without getting in the way. Its unfair to try to categorize the work, so I won't try too hard here to do so. But what would you be if you didn't try? I kinda/ sorta would compare it in spirit to... oh, David Byrne's score for "The Forest". Only totally different.

Anyway, the movie is a favorite. It was a huge treat not just to see it on the big screen, but with such a huge amount of love put into the music.

I like to point out that for all the snooty, looking down the nose critics like to do with sci-fi, this 80 year old movie had three sold out shows and inspired musicians, who could be doing plenty of other things with their time, to create new works of art just to support it. And not just here. Nathan mentioned a similar effort in San Antonio, and when I described the screening to League-Pal Robb at dinner, he told me about a screening at Seattle's Gasworks Park about a decade back that attracted thousands. THOUSANDS.

Its not the genre that attracted the audiences, but there's something to the mix of story, homily and visuals that sci-fi makes possible. And while few have done it anywhere near as well as Metropolis in those years, I don't see "Wings" (best picture, 1928, and a really good movie in its own right) drawing three sold out nights and a new score.

For the record, there's no known direct connection between this movie and the naming of Superman's adopted hometown. Nor does there seem to be any direct connection between the film, its themes, its portrayal in the comic, etc... and the movie. I think teen-age comic developers, Siegel and Shuster, picked it out of the zeitgeist in the years after the movie appeared in the US. Superman would appear roughly 10 years after Metropolis, by the way. So, yeah, the Germans were ahead of us on this crazy sci-fi thing.

Good post. Make sure to thank your wife for forfeiting her ticket.

So do you think there were robot nerds back then? With robot lady pictures on their wall?

Michael, I have a hard time believing that the powerful mix of robots and boobs didn't immediately wedge itself into psyches of young nerds in 1927. I imagine, though, that it was a lot harder to get your hands on robot erotica in 1927 than the internet surely makes it today.

Hey, if you liked Metropolis, check out Lang's "Mabuse" movies if you haven't already. The mad scientist from Metropolis plays this criminal mastermind who gambles and manipulates banks (so, you know, relevance) and can control your mind!

Oh, and I totally agree that Metropolis is the ur-text of robot-erotica. It's a straight line to Bride of Pin-bot.