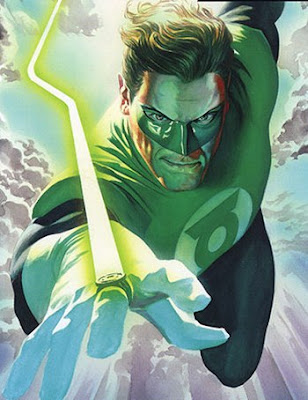 It sounds like the Green Lantern movie is sort of moving ahead.

Randy and I had exchanged some e-mails today as rumors were abounding that Justin Timberlake had screen-tested for the Green Lantern movie. Massacremike discusses here.

WB has not gone with the Mother Lover.

Instead, they've decided to go with Mr. Johannson himself, Ryan Reynolds. Marrying Scarlett Johannson, getting a role in Wolverine that could spin out into a franchise (Deadpool. FYI.), and now getting the role of Hal Jordan? 2009 is working out well for this dude.

Here's the article at Variety, which sort of makes it official. (Thanks for the article, Randy!)

Is Ryan Reynold's my first choice? No. Is he much better than what could have happened? Absolutely.

I do think an early-career Hal Jordan should NOT be an everyman. After all, he's a test pilot, is selected by the Guardians because of his willpower, is one of the few Lanterns to challenge the Guardians, and is generally considered to be a bit pushy and a loose cannon, by GL standards. And I think Reynolds can do that.

Now, the question is: Who will they cast as Sinestro, Abin Sur and others? And how many characters will be entirely CG? How do you portray Tomar-Re? (Please do not let them make Kilowog some moron in a rubber suit, a la Chiklis as the The Thing).

The script is supposed to be by a couple of TV and comic writers. if you've watched Elias Stone or have been reading Spider-Man lately, you've probably read Guggenheim's work.

Anyhow, its a wait and see game now, as per whether or not this thing will be any good. I'm not holding my breath.

I think Reynold's can pull of the cocky test pilot act. At least that is how Hal should be acting early on in his career.

Oh and by the way Ryan Reynold's is Canadian!

So Ryan R. is both Deadpool and Green Lantern?? You'd think some smart lawyer in tinseltown would've drafted a non-compete clause after the crazy James Marsden fiasco.

There are worse choices. You have to admit (I myself did not greatly care for Wolverine movie, much as I wanted to) that some of the best Wolvie scense involved Reynolds.

I have never read Deadpool comics, and only vaguely know of the character from some dabbling in X-Force, etc... during the early 1990's. But I thought Reynolds was pretty good in a fairly terrible movie.

The Marsden thing was particularly harsh, but given that the director was Brett "I'm a Man-Child" Ratner who I can see making such a decision, I think it was a unique case.

I also wouldn't hold my breath on a Deadpool movie given Wolverine's less than stellar ability to maintain an audience after its first week of release (and that's a character people have heard of). Its tempting as comic geeks to believe all our favorite characters should get a feature, but I'm not sure Deadpool will spin off any more than the crew from Blade: Trinity wound up with their own feature.

As per collected editions of Wednesday comics...

Yes. I follow you, NTT. I am not sure how the heck they'd reprint such a thing, and am afraid they will reduce the size of the page. We'll see. The thought crossed my mind around the Superman story and said to myself "this will read better once its collected. Oh... wait."