Superman on a Boat, Wednesday Comics, Elvira at the Alamo, etc...

Working on some e-mail interviews for upcoming projects by Loyal Leaguers. More to come on that. In the interim, here's some other stuff.

Superfans: On a Boat?

Apparently someone is putting together a cruise for Superman Fans. A Cruise. I don't even know what to make of this.

Should The League be on a cruise with with other superfans? What would that be like? I can scarcely begin to guess.

From the Superman Homepage.

Sadly, a cruise is probably out of the question, anyway. Jamie can't do a cruise, so it's unlikely I would abandon her for several days of fun and super-snorkeling, etc... without her to go hangout with complete strangers. Even if they could land Noel Neill for the cruise.

I also have some questions about whether or not a cruise is the right way to express our Super-fandom. I'd think maybe something a bit more selfless would be a good way to stand up for Truth, Justice and the American Way (although taking a cruise in the name of a fictional hero does seem terribly American).

It's all very strange. Then again, I've never been on a cruise.

This week sees the debut of DC's project "Wednesday Comics". If its been a while since you stepped foot in a comic shop, this would be a great week to do so. For a mere $3.99, you can get a tabloid-sized comic featuring the best and brightest in the genre/ industry.

I think Busiek is on GL. Stuff like that.

This week also sees a new issue of Superman: New Krypton and the fist official issue of the Green Lantern Mega-Event, "Blackest Night".

My nerd radar is going crazy.

A little forewarning: I'm kind of suspecting that these strips are more about the art than the content in some cases.

I've been waiting something like four years for this Absolute Edition. 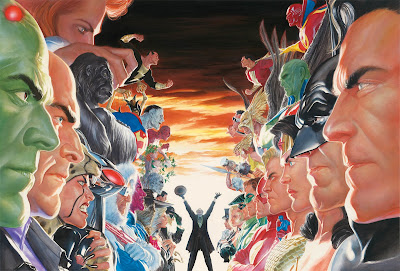 
Post from the DCU blog with info on the book.

So.... DITMTLOD, Cassandra "Elvira" Peterson, will be at the Alamo in July.

I need your help. You all know I adore The Mistress of the Dark, but I don't see myself getting to both Elvira screenings.

Should I go to see Elvira on Tuesday (the show with the better location and showing time)? Click here.

Or should I go to see Elvira on Wednesday at the Ritz for a late show, but with the movie I prefer of her two starring vehicles? Click here.

And... Who wants to join me on this adventure? Let me know which flick you want to catch! 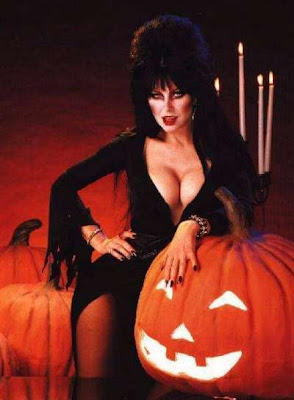 I do not see any reason here why I would not wish to attend
Posted by The League at 10:31 PM

I think that at some point we should look into the possibility of renting a boat on Lake Travis for a more personal cruise with The League. I look forward to hanging out with Leaguers in my captain's hat and Speedo.

Is Justice even any good to warrant an Absolute Edition version from DC? I thought that was reserved for acknowledged classics published.

Well, I think Absolute Editions have a two-fold path.

1) Long-standing classics (Watchmen, DKR, etc...)
2) Fan-favorite artists whose work will be great to see in the larger sized editions

Nobody thinks "Hush" is a literary masterpiece or that it broke new ground, but it and Azzarello's swing-and-a-miss on Superman with "For Tomorrow" featured Jim Lee on pencils, and so both are getting the Absolute treatment.

I wasn't that wowed by Justice as a story (I thought the action spilling out of villains plot was great, but the actual plot... but the plot itself wasn't my favorite), but I'm decidedly in the Ross camp, so this sort of thing appeals to me.

Other items haven't received the treatment that are considered classics, but are getting DC Library or other editions when they run the numbers to see if an Absolute Edition is worth it or not.

Well I dragged myself to the LCS today for the first time in a long time to pick up a book on Wednesday. I had to check out Wednesday Comics #1 and I wasn't disappointed.

The Gibbons/Sook Kamandi was great.
Metamorpho by Gaiman/Allred was perfect.
Strange Adventures by Paul Pope was the reason I pre-ordered this thing anyway and it didn't let me down. I mean blue monkeys!
Supergirl with Streaky and Krypto!
The Metal Men was cool. Can't believe I liked some Dan Didio did.
Wonder Woman was trippy.
Loved the two strip setup of Flash and Iris West by Kerschl/Fletcher.

I made it to the Metal Men story and stopped. I'm saving this thing and parsing it out to spread out the joy. I was right that its all about the art, but I think the one page per week format is forcing the writers to use their heads.

I do, officially, really like this format. This, Blackest Night and a "holy frijoles!" ending to New Krypton made this a pretty darn good week at the LCS.

I've done a speed reading on it about three times so far. When I have more time tomorrow I'm going to read it slower and really enjoy it.