If my Facebook friends are any indication, I am not the only one who has tuned into Fox's new program "Glee".

Fox did something fairly smart, originally broadcasting the pilot last spring, and then offering it for free online all summer long, let the buzz grow online and at places like Entertainment Weekly, rebroadcast the pilot (which is, honestly, very good) and then got the season going again with episode 2 broadcast last week. 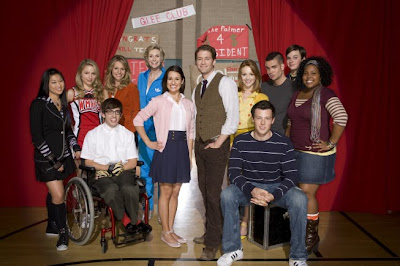 That's not going to work for every show, but a show that needs to find its audience by word of mouth and from trusted sources rather than a blitz of ads... I guess I think the same approach would have helped "Arrested Development" with a stronger start in teh ratings, and give people an idea of the sense of humor the show had instead of going back grazing to "According to Jim" and "Everybody Loves Raymond".

"Glee" is about a high school teacher who dearly loves his job, and gets the opportunity to coach the unpopular and underfunded Glee Club at the school. The same school where he led the Glee Club to nationals in 1993. Which makes the character just about my age.

The characters include what should be crude stereotypes for the kids, focusing for now on the "girl with a dream" who firmly believes too much in her aspirations of Broadway, and the jock who is realizing he likes to sing.

But any show that wraps with a spirited rendition of "Don't Stop Believin'"... that goes from a pomo chuckle to actually hitting that sweet spot of the Broadway musical by songs end... hey, my hat is off.

The show equally (for now) follows the teachers at the school. The aforementioned Glee Club coach, a football coach who actually isn't that interested in his job, a germ-o-phobe guidance counselor, beleagured but shrewd principal, and Jane Lynch (who I can't cook up enough superlatives to describe) as the cheerleading coach who has won nationals and has let it maybe go to her head a little.

The League was, of course, a drama kid, so I feel I have some small insight into the non-sports high school world and the adults who led us kids. But Jamie was actually in Show Choir in high school, so I think she's particularly entertained (Hey, She's headed for the future...!).

Its tough to describe the sense of humor of the show, but its certainly got a knowing wink and a nod to the world of high school that you aren't going to find in shows like 90210. And its treatment of the adults who live in that world isn't bad, either. There's an interesting juxtaposition between the kids with their future ahead of them and the adults who are looking at doors potentially shutting around them.

While I adore Jane Lynch in pretty much everything she ever appears in, the character who rings oddly, insanely true is Rachel Berry, the wanna-be-a-star heroine of the show. We didn't necessarily have anyone with that myopic view of stardom at KOHS, but I spent 7 weeks at drama camp*, and the number of kids who believed they were headed for stardom.. tomorrow... was astounding.

Anyway, you sort of have to love that dame.

One thing I've noticed... there are different styles of acting (no, really). Broadway and stage actors have certain habits that you can see (in front of a camera, they might forget they are not projecting to the back of a theater). When you listen to the delivery of lines by the leads, occasionally you pick up that odd lilt to their lines that doesn't sound weird in musical theater, but on a Fox TV show... Anyway, it doesn't bother me, especially as I know that by necessity, they were working with musical theater people... but every once in a while, actors Matthew Morrison and Lea Michele sound a bit like they're voicing for a Disney movie.

I have no idea what actually happens in Glee Clubs and Show Choirs across the country, but I do know that there's a hopelessly optimistic view of music as its processed by the show choir directors.

So seeing bright-eyed kids wearing matching outfits singing Amy Winehouse's "Rehab" rings just about right. That the pilot winds up with Journey, and the second episode features Kanye and Salt'n'Pepa is something The League can only salute.

It could be a one note joke to see covers of popular favorites, but I think the producers are savvy enough that they know how they can make this work.

*Yeah. Drama camp. I said it. It was money well spent as it showed me that I was not going to major in drama in college.
Posted by The League at 9:05 AM

I'm curious to see where the show goes stylistically from the pilot (which I thought was very close to Election). Jane Lynch is amazing.

You're correct about the comparison to Election. I hadn't thought of that, but its certainly true.

What I want to know is if choir/glee clubs have now really transitioned to singing/dance troupes? It's all looks great when they break into an ensemble rendition of Journey but every time I've seen a real glee club all the members look like they're dressed for a wedding in evening wear and stand in a row singing. No costumes, no dance moves and certainly no jazz band backing.

Have glee clubs and choir now progressed into Broadway stylings in real life?

Dude, I have absolutely no idea. My knowledge of show choir stops and starts withw hat Jamie told me about her high school experience.

Also, when I go wander around high schools, you know, just 'cause.

Bah, the League is no help in my time of need. Jimmy Olson would at least try to investigate even if though he would muck it up in the end.

Well, ever since the restraining order, its a lot harder for me to know what high school choral groups are up to...