I swear I've been meaning to do this post for a couple of years, and always wanted to save it for Halloween.

Shortly after moving to Houston (just prior to the start of my sophomore year) I was renting a lot of movies. I hadn't really made friends yet, so my weekends had some time to fill, and I think my folks were just happy that I wasn't sitting around looking gloomy about having had moved if I was wearing out the heads on the VCR.

One fall weekend, I rented "The Rocky Horror Picture" show. I believe it had been an anniversary, and so there was a big to-do about the film's release on VHS.

I had been scheduled to see it at the Village with, I think, Carla G (Carla N, back then) before moving, but once KareBear caught wind of the shenanigans at the theater, I was informed I could wait until I could darn well drive myself.

It should also be noted that the theater at Northcross Mall in Austin (now gone) had been among the first in the country to have late-night screenings of Rocky Horror. So Austin was quite into the tradition back then.

I was already quite taken with the movie from the opening (featuring the lips of Patricia Quinn singing about "The Day the Earth Stood Still"), and was perfectly happy with the Time Warp prior to Columbia making her first appearance. 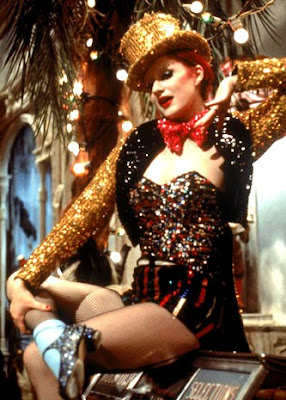 It was most likely Columbia's tap-dancing, glittered self that sparked my interest.

But I knew two things:
(a) Gold glittered hats now seemed like a much better idea and
(b) My folks must never, ever see this movie

The movie itself is a love letter to a kind of science fiction I'd only begun to discover via Mystery Science Theater 3000, and with which I was quickly becoming enamored. As a consumer of genre fiction, I got the set up, but a lot of the rest of the territory was not covered particularly well in other material I consumed. Omni-sexual mad scientists, fetishizing muscle men, and even Meatloaf were all fairly new to me...

But I was focusing a bit on the girl with the nasally voice and tap shoes. 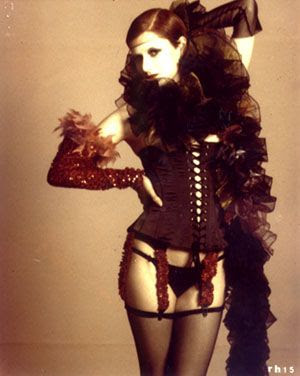 As we all know, Columbia wasn't the only one who got one of these outfits

Unlike a lot of other DITMTLOD, Columbia is a supporting role in a single movie, so there isn't a whole truck load to say. Her character has a somewhat interesting arc in the movie, and she gets to fawn over a rockin' Meatloaf in the role of Eddie. And I guess I thought Eddie was pretty cool, too.

In many ways, I'm not entirely clear on why Columbia rather than Magenta or Janet.

Like a lot of other DITMTLOD, I really didn't have any analog for Columbia. Certainly none who tap-danced and sang. But, in general, she seemed like a neat idea. I also suspect that, at age 15, my developing brain was feverishly trying to cram ideas and firing synapses into into the correct spots in my psyche in something analogous to the the old board game, Perfection. 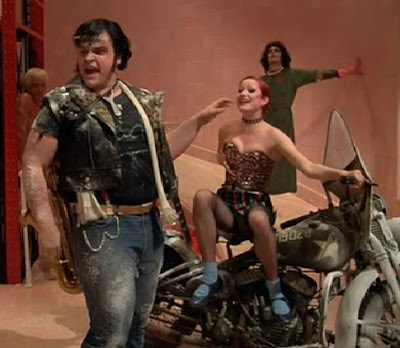 Anyway, whether it was her natural charm, her joie devivre, that she looked good in glitter and tap shoes, I've no idea, but I still have a warm place in my heart for Columbia.

You see a lot of Columbia costumes come Halloween time, at least for sale. Aside from wandering 6th street, you don't see all that many of them. I assume they're sold for use at performances of Rocky Horror, which, I might note, 20 years on, I still haven't seen.

Little Nell herself has been in a few movies, including the late 90's version of "Great Expectations" and the little-discussed sequel to Rocky Horror, 1981's "Shock Treatment", which I've never even seen on a shelf to rent. I have little understanding of her career or trajectory post-Rocky Horror, but she turns up in VH1 docs about the movie and that sort of thing, and I believe may work in clubs or restaurants.