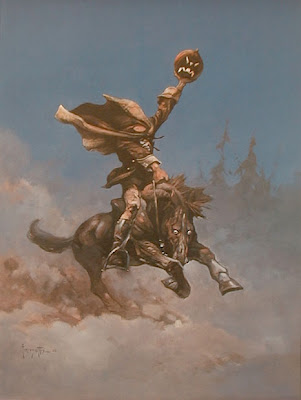 Not just content to be terrifyingly headless, he's also got to have a flaming Jack O' Lantern. That Headless guy really knows how to turn it up a notch.

I do not find vampires frightening. If decades of cartoons and cartoonish post-Lugosi Dracula imitators didn't drain the idea of blood suckers of menace, then surely the post Anne Rice world of foppish emo-boys and the Xerox of a Xerox that's sprung since then, culminating in the glittering Foley's catalog models of Twilight, emasculating the horror of Dracula while simultaneously rewriting the narrative to suggest that the eternal damnation of being one of the undead was nothing but the modern day "bit by a radioactive spider".

Frankenstein is a tragedy, not horror. The most frightening thing about "The Mummy" is how dull the original movie is after the first ten minutes. Its tough to be scared of "Creature from the Black Lagoon" when its a movie that takes place almost entirely on sunny days in a nifty looking swimming whole, and Julie Adams' production value completely distracts you from the story.

The story of the Wolfman, however, is one I find intriguing, even if the original film starring Lon Chaney Jr. isn't going to hold up terribly well (especially the FX). Like Dr. Jeckyll and Mr. Hyde, the concept itself explores the horror of the beast living inside, whether we put it there, its madness, or the beast was there all along. It doesn't matter. 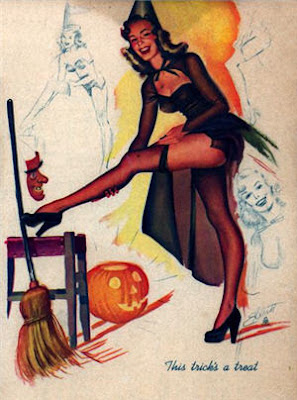 Similarly, if I liked Paranormal Activity, it wasn't because of fine acting, but because it reminded me of a small budget version of "The Haunting", a movie in which There Is Something Out There, And it Is Evil, and It Is Going to Keep Coming Until We Are Dead.

There's nothing comforting about either evil, disembodied spirits or restless souls of the dead. 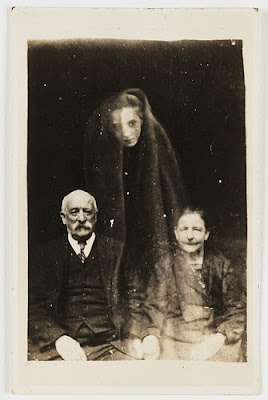 At least not in the laughable, let's-cheer-for-the-killer manner that's made franchises out of masked psychos. In the unknowable way that led to animism when turnip-eating peasants walked down the road in the dark and told themselves that the fear could only exist if there was, in fact, something out there.

I find it sad that I have no ghost stories of my own to share, and no other-worldly experience to relate for you to read at your desk (and shouldn't you be working?) on the day before Halloween. No tale of driving off and finding that a hook was hanging from my door handle, or that Jamie and I barely dodged sure doom if we hadn't left Make Out Point that one, eerie evening. 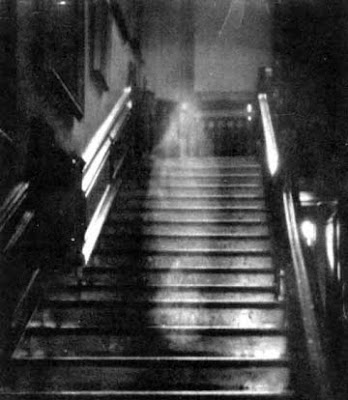 All of the stories I know are either made up, or are real and nobody wound up laughing at old Ichabod Crane as he fled from the Headless Horseman.

Even the one ghost story we thought we had when we were kids turned out to be a raccoon that had somehow gotten into a house that was for sale.

Instead, all I can relate is how I'm traveling, as I meet people, I'm making sure they don't ever have anything to worry about ever, ever again...

Jesus, people can be cruel. If it's not my build, its my personality.


I dare you not to watch to the end
Posted by The League at 8:23 PM

You actually want a ghost story??

I consider myself absolutely fortunate that I've never had to deal with the supernatural, the undead, disembodied spirits, disgruntled fiends, awakened Cthulhu, demanding demons and various cryptozoological manifestations.

Yea, I'll take boring with a side of sedentary please.

I think part of the fun in Halloween comes from the fact that it celebrates things that are kind of spooky and creepy, but we depict them in a cheesey, kind of ridiculous way. As I get older, the things that scare me wouldn't make for very good costumes, and they really aren't much fun (e.g., sickness or injury in people, violent crime, catastrophic disasters, financial ruin, etc., etc.). Halloween lets you explore a bit of fear without having to deal with the real world consequences that make things truly scary. Plus there's that whole idea where we take things that we really are afraid of and find fun ways of interacting with them one day out of the year. (isn't there another form of this when people try to take the sting out of death with Dia De Los Muertos down in Mexico? I think Halloween works off that same principle, but in a broader context) Also, scary things aside, Halloween is just fun because it's fun to see people dress up as something they're not. That's always fun.

Oh, and the candy! Candy is fun!

Well I love Halloween and all its context. I just know that if there's something supernatural, I'm heading the other way. Because one thing I learned as a latch key kid watching Night Gallery, the Twilight Zone and In Search Of in the afternoons waiting for my parents to come home is that you don't screw with the supernatural!

You though, even without Halloween, are a much braver seeker than me. I mean, weren't you contemplating trying to start your own Ghost Hunters show? There's a reason I stash a high lumens MAG flashlight in every room in my house. Just in case. Cuz you never know if you're going to need it. I will follow the wise words of Mr. Samuel L. Jackson and stay out of room 1408.

Yeah, you're off the team, NTT. Well, maybe u can be our lawyer. Rick Moranis style.

I'm definitely down with Halloween as you describe it. I just always get to Halloween and wish I had a good spooky story to share. Alas, I live in a mundane world in which I do not encounter much in the way of the Supernatural.

And, yeah, as we get older, it has to be about embracing the cheesy side of things. Being afraid of what can actually get you in this life isn't terribly wacky.

I am sad nobody enjoyed my Barton Fink reference.

I told ghost stories today in a haunted hotel. An old one with creepy manniquens. Happy Halloween.

I wish we had your storytelling prowess around here, my man. I know you could sping us a hell of a yarn.

Would that I could transport myself Nightcrawler style to your party. I would greatly enjoy it!