Short post as I am headed to Waco in the morning for 36 hours or so, and have not yet packed. 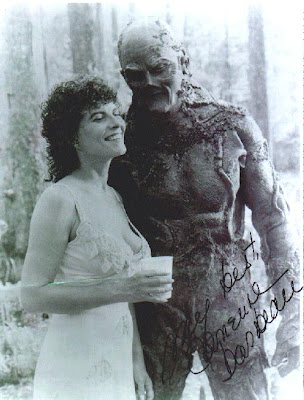 I am much more familiar with Swamp Thing from the DC Comics that spawned him as a horror hero character, but I got on board late with the series prior to its cancellation, have only read a few collections, watched the show on TV circa 1991, and know that as The League is to Superman, there are many-a-Swampy-fan.

The movie is directed by horror-meister Wes Craven, and features Adrienne Barbeau, Ray Wise, and Dick Durock as the actual creature.

Unfortunately, Mr. Durock passed last month, and as I'd enjoyed him as Alec Holland/ Swamp Thing in the TV series, I decided to check out the original movie, which I had no real recollection.

It's a product of its time, as post-70's, 50's-monster-retro schlock. Only the Swamp Thing's costume approaches convincing, the actors are clearly having a grand time chewing the scenery, and its remarkably malaria free, filmed in swamps somewhere near Charleston, SC.

Given how frikkin' seriously most comic dorks take Swampy and his adventures, it was a bit jarring. But, like all good DC characters, Swamp Thing is elastic enough as a character that it works, and you can simply enjoy his comics as something different all together.

That's not to say the movie is Oscar material, but I enjoyed it for what it was, which was: A bra-less Barbeau and a swamp monster duking it out with a mad scientist and his minions and a mutant or two. And on that description alone, I think I've just sold myself on watching the movie again.

I recommend The Swamp Thing's Alan Moore-penned stories, when Moore took the concept (which wasn't all that far from the movie, anyway), and showed DC how they could update already good concepts, keeping the comic intact, while expanding the possibilities for new kinds of story-telling. 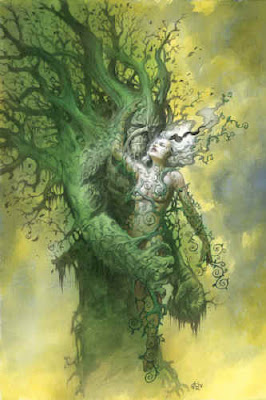 By the end of the Swamp Thing run I was reading, Swamp Thing was revealed to be a nigh-omnipotent Earth Elemental, with control over the Earth's greenery, and no real physical form (and people say Superman has too many powers...). Anyway, its good stuff, and I highly recommend.
Posted by The League at 10:30 PM

Yeah, it is definitely one of those flicks you have to just enjoy for what it is.

Alan Moore's Swamp Thing is pretty amazing. I recommended reading the trades at night via flashlight as it is the best way to experience it.