LoM: Wrapping It Up 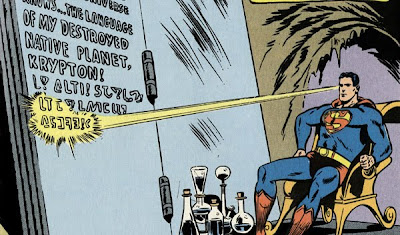 Yes, this is how Superman writes in his diary. And, no, I do not know why he would own such a chair.

The Last Issue of League of Melbotis will be published in 2009.

It is true. I'm currently planning on shutting off the lights and putting the chairs on the tables prior to the holidays.

I sincerely appreciate all the support, but due to budget cuts, yadda yadda...

These days it seems that my output is exceeding my input by a great degree. It seems unwise to believe that I'd have much worth saying if its just coming from the echo chamber of my head. And I miss input. And if I am going to have output, I'm not sure I'm ready for posts about how directors missed the point of Galactus as what I leave as my legacy to mankind.

A date has been selected. A little randomly at that, but a date. I do not want to stop publishing abruptly, and I do not want to stop because life circumstances say I have to. But all parties end, and it may be time to start clearing away the bottles and get the plastic red cups off of every flat surface in the place.

And more than anything, while I enjoy the site, I've ignored old projects while indulging myself in the far simpler task of musing on TV, movies and comics. As much as I love forcing you to look at Superman and Jimmy Olsen, I deeply miss actually making things. 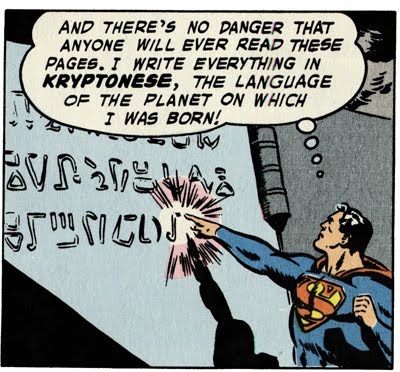 An original attempt at LoM was also written in Kryptonese. My readership levels, honestly, weren't all that much different.

I thank anyone and everyone who ever stopped by League of Melbotis. I've a special tip of the hat to anyone who ever commented, and a tearful, prideful salute to my Loyal Leaguers, many of whom have become terrific friends.

There's a lesson to be learned from American TV finally realizing shows should wrap up and have a conclusion. At some point, too many shows become a self-perpetuating machine that don't do much but give back to the loyal few and itself. Comics are learning this is an issue, too. So why not LoM?

It would be nice to end a bit more like Promethea, Sandman, Preacher, etc... than feel we've dragged out this thing for way, way too long. Probably too late for that, but...

For years I've thought about when one ends something like this. There isn't any natural marker beyond events which... well, I'd rather we say adios to what's been for me, a grand and happy experiment, on a cheerful note. And so, lets do this with a smile on our faces. And take maybe too long, but long enough so we know we're doing the right thing.

And with all that said... We may be back. Just not at League of Melbotis. Like Superman, there can be a Gold, Silver, Bronze age... all of these things. But I like the idea of closing the book on this volume in my own life and seeing what happens when you reboot. I just don't feel I need a Crisis to do so. I'd very much like to do it without any crisis at all.

So we've got a a couple of months to go. Hopefully the urgency will mean I try a little harder and its worth it a little more for everyone involved. We can clear up any business, figure out what was left outstanding, and make sure we all go home in a good mood, even if the hour is a bit late and we know we're going to pay for it tomorrow.

The last post is currently slated to be December 20th. We look forward to filling the next two months.

Despite my feeling very good about this decision, this has been, I confess, a very difficult post to write. 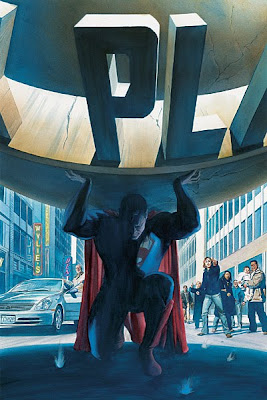 I am sad to read this but I think I understand, having abandoned my own little corner of the internet often and far less gracefully. The League will be missed.

Totally understand. But sad just the same. I had just really gotten into reading this thing in the past year. Bummed I didn't have a longer relationship with the League.

I unofficially abandoned my own dorky blog just recently, but I can't bring myself to write the last post.

And I lasted a much shorter time trying to sustain it than you did. Your long service to blogdom has been appreciated.

Well, I have enjoyed it. I hope your next chapter is full of renewed energy and fun! Best of luck.

Oh my! I have always enjoyed your blog and now to see it end is kind of like getting dumped...I kid, I kid. Best of luck with your future endeavors and thanks for bringing a few laughs and entertainment to our lives.

I think you should pitch some essays to a paying publisher. Maybe the Statesman? You're a talented writer, and genuinely funny.

My friend Jen (who knows you) introduced me to your blog, and I've enjoyed reading it. I'm not as much a comic book guy, but it's nice to hear your takes on everything.

Haven't we been through this before? Like a number of times? (as a matter of fact, isn't one of many examples the recent announcement a hiatus that you never actually took?) Is this just a cry for help? How can we help you, League?
(and if blogging is really taking up that much of your time, you and I must have very different approaches to it. Well, for one, you seem to actually want to entertain people...)
And why are you keeping us all in suspense if you're going to kill The League?
Kill it now, I say, and show some backbone, man!!
(and I'll be accepting any and all of The League's abandoned readers over at my blog... even though I feel compelled to warn everyone that I don't know much about comics)

Come to think of it, I even remember talking to Jeff wilson about how you had threatened to commit blogocide several times- so obviously that was a while back...

I have a writing project I started in 1997 that's been on ice on and off, and has made almost no progress since I started LoM, and where I'd like to re-direct my energy to give it that one, big shot.

I've also got some drawing stuff I want to work on, and get back in shape for cartooning, which I hardly do anymore at all.

Its not a matter of suspense. I prefer to have a graceful exit point, and year's end seems like a good place to close the doors.

I may re-wrap some writings from LoM into another project, as Nathan suggests. I'd spoken to JimD about doing exactly that at one point. Everything will need to be edited, but... It's crossed my mind.

Paul, I salute thee! I'm not sure which Jen I know that you know (I think I know about 10 Jens), but you have my sincere thanks for stopping in.

Well that is sad to hear but I'm excited to see what else your talented mind will produce.

Well, I would like to see some more drawing and writing out of you, too. (for those who don't know, The League is a gifted artist). If that's your reason for shutting things down, though, I think your final post needs to be a pledge to actually get some stuff done. I'd hate for time spent on The League to end up being transferred to Myth Busters reruns and Flavor of Love reunion shows.

That sounds fair enough. And I will think about making stuff available either via a blog or Google Site.

So... now is a bad time to announce my new project: The League Blogs About VH1 Projects and Discovery Channel Programming?

okay so what am I supposed to read now? Tell me that!! j/k

You have my support.

While watching the dogs at your house in September, I remembered glancing at, then thinking on, two things in the house: the wedding picture/group shot of your friends and a framed drawing/sketch of yours (and no I didn't enter the Fortress or go rummaging through your house). I bring this up because it made me think: Ryan should really draw more. You can, many can't. Mangum and I had a heart-to-heart this weekend about just this kind of thing. I told him to go to Cozumel for Thanksgiving. I'm telling you to draw. And Jamie is coming with me to Portland : )

Are you guys going to Portland permanently? I only ask because Jamie is entirely likely to take my good CD's.

I appreciate the support, Nicole. Sometimes you need to sort of do what the little voice in your head says, except when its telling you to burn down your office building.

@Ryan They stole my stapler. It's not like I had any choice in the matter.

I worry that I might be overreacting, though, since this threat has been made so often over the years but never carried out once the silent lurking readers call out.

I'm looking forwad to you shutting this thing down so I can provide people the truth about what you've been doing without any interference from this cursed site (keep in mind that I started my own blog in 2004 just to defend myself against the baseless slander you had inflicted upon me, and we're both still here).

I'm going to go on a hunger strike until Ryan chnges his mind. And possibly chain myself to the door to the Fortress.

I would suggest picking a door we use frequently, or its going to end poorly. Also, Emily wrote me and is encouraging me to not write any more. She says she can use the free time if you're chained to a door in Texas.

I can only imagine the time and effort you've put into this blog. All I can say is I read it daily (when I read anything on the internet) and it will be greatly missed. Make sure and let us know should you change your mind in the future. The collective mind of online could use you.

Where's JimD when you need him most?

Sorry, I have spent the last two days preparing a Temporary Restraining Order and Motion for Permanent Injunction prohibiting Ryan from abandoning the League. I hope to get this on file shortly.

I always knew this would end with me under the yolk of JimD's legal maneuvering, turning the LoM into a sysiphean ritual of trying to find amusing things about Jimmy Olsen.

Wow. Sorry to see this ending. I enjoyed commenting on the blog and reading it every day.

I'll be interested to see where your creative and productive mind takes you next.

I can tell you now: Lots and lots of poetry about The Admiral and Christmas.

I wonder if anyone's ever been forced to blog under a court order.

Maybe the League should open its hallowed halls up to guest contributors and transform it into a blog publication under an editorship, like Boing Boing? I'd be happy to contribute my inanities in a post. And then run for cover protected by the League's aegis as the pillory commences.

I am not against such an idea in theory, as I've participated in similar endeavors in the past. However, those group blogs never seemed to go very far.

Check back with me in 8 months on that.

I will add my "sad but I get it" to the long list. I've always thought the League was one of the better blogs out there, and I'll miss it.