So I was working on this sort of pointless, mid-week filler post for Comic Fodder regarding the value of Power Girl in the DCU, even when artists are complete morons. 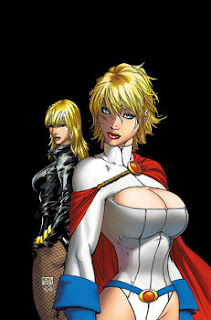 Cover to JLA #10, which defies logic and gravity

There's nothing like a Michael Turner cover to suddenly make you embarassed for buying a comic. This is the JL-freaking-A, not Juggs Magazine. I, along with 80,000 readers, was going to buy this comic if the cover was blank and made of butcher paper. But, Turner went and ruined it.

Anyway, the point was that this sort of nonsense detracts from a character, especially one that is already treated like the class joke by a lot of creators who still giggle like a thirteen year old when they think of boobies. There was a dicier portion of the post for which i needed quotes, links and whatnot as I disagreed with a blogger's statements I'd read elsewhere. I just couldn't remember where I'd seen the post.

I looked and looked.

I'm currently using the latest Explorer, which is not unlike Firefox in that it provides me with tabs. Over at Comic Fodder, I try to behave as a bit more of a journalista, citing sources, lots of linking, etc... the tabs help me stay organized as I jump from pane to pane, looking for material.

All i really needed to do was find that last link and I could start wrapping the thing up. I'd looked at more than a dozen likely sites, and hit a site which was clearly NOT my site, and which didn't want to load...

And then IE went all IE on me, and shut down my unsaved post, the page I was looking at, and a few other references I had in pocket. I was utterly shocked, but felt like I'd learned an important MS IE lesson. I don't know what sites I'll hit, so I need to start saving more often and consider going back to just using multiple windows.

Maybe it's for the best. That post won't see the light of day, and I can maybe think about it a little harder and do my proper legwork before writing. Still, that was a particularly large amount of documentation for that particular column.