So readers looking for the post on our visit to Johnny Clambake's will find that I've taken down the post. This was not a decision that I came to lightly.

Folks who've followed this little drama know that I was contacted by the owner of Johnny Clambake's. Now, I've been at this long enough and worked on enough blogging projects to know that the internet is a funny place, and occasionally when you discuss someone or their work, they may pop up and argue with you.

Some time ago, when Nanostalgia was in existence, I made a stray remark about a web-comic creator, and wound up in an online debate with that creator. It was sort of surprising, but I thought kind of cool. And Lea Hernandez turned out to be really cool.

When we were using HaloScan for comments, musical composer "Meco" once commented upon remarks made here about the Star Wars Christmas album.

The internet is the world's biggest small town, depending upon what kind of Google Search you're performing.

Here's the thing: I'm a big ol' softie. I love people. And I also don't exactly feel like LoM is the blog of record, so I feel only a minor responsibility to ensure my journalistic integrity.

So I pulled the post not for Johnny Clambake himself. I pulled it for these guys... 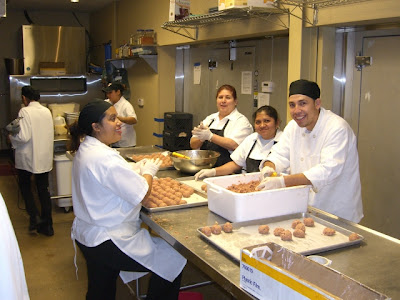 These are the employees of Johnny Clambake's who were photographed making meatballs BY HAND (how about that?). I am told they do not live at the restaurant, but have no doubt that they're working hard to make good meatballs. (Now if someone can tell me how noodles are made...)

And I don't want for some random Google search results resulting in even one of these people to lose their job. Look at 'em. Those guys are all right.
Posted by The League at 8:40 PM

I understand the desire to take down the post when it becomes "real" when its subject writes to you.

However, I think that any business owner who invites everyone in the community to sample his wares runs this risk in the information age. Would you censor what you told someone in conversation? Why is the web any different? Simply because anyone, including the subject of your commentary, might stumble across it?

Unless you suddenly decided that the food or service you had was good, or you suddenly fell in love with the pod concept, I'm not sure it is worth deleting. Where do you draw the line? When the Unicorn Anti-Defamation League calls?

I assure you, I did not remove the comment to accommodate the owner of the restaurant. In a way, I feel the post had more than exceeded expectations as it did result in the owner and I having a frank discussion of my experience in his restaurant. In a new venture, I am sure comment cards are always read. But I think we've moved well beyond that.

Several factors went in to my decision to remove the post, none of which had to do with anyone being upset about the content of the message. But I was concerned about my placement in Google searches, and an entry I'd written for the benefit of my known audience became something too easily seen by an unknown audience. In the end, I decided that I'd rather not put a dent in the South Austin economy and anybody's livelihood rather than keep up a post my readership had already read.

I am considering reposting at some point with the names redacted.

I always draw the line at my actions harming someone of harming the livelihood of others.

So, bring on the Unicorn Anti-Defamation League. Those one-horn loving bastards.

I understand what you are saying. Part of what makes the Internet so crazy and fun though is precisely that you can stumble upon some random person's review of a restaurant or film or local hot spot. But I see where you are comign from.

Keep in mind that the people in this picture are not going to share in the profits that will be made by the owner of Johnny Clambakes. Instead, he will build a mediocre food empire (and probably buy a mansion and a jet boat) on the backs of these employees. Anyway, Johnny Clambakes has bigger problems to overcome than a poor review on The League.... (like the fact that Italian food simply doesn't lend itself very well to sitting there lukewarm on a buffet line)

You can't make everyone happy all of the time, and some of those unhappy people have blogs.

Also, The League is still a wuss for taking down his post.

I always draw the line at my actions harming someone of harming the livelihood of others.

Really, though, if one is to be a critic, this is the natural consequence. Will you take down your posts about comics if a creator complains about criticism? Will you take down your posts about film? The difference, I think, is that in this post you were writing as a larger fish in a smaller pond (local man writing about local restaurant as opposed to citizen of the world writing about large film or book). Harm, though, can be subjective, and I bet there will be some folks who wished they were warned off if your original review reveals any kernels of truth.

Hate to say, but anonymous has a point, though I see yours as well, and recognize there are always degrees and gray areas in situations like this.

Although the owner may not be hurt and builds his mansion and gets his big boat. The employees, no matter how small their salary, it is still a salary. That is how they are making their living. The place closes down and they do not have a job or an income. I am with people earning a living that is not very large weekly, but that is how they survive. I am glad you pulled your blog.
Karebear

See, KareBear is on my side.

I'm with The League on this one.

Comments were disabled on the hiatus posting, so I guess that discussion moves here? I really don't think that this is a big enough deal to prompt soul searching. Really, it's just about the philosophy of blogging, and some people may have a different philosophy than yours. Reasonable people can disagree, and that appears to have happened here. But at the end of the day, it's your site and you can do what you wish with it and those of us who enjoy reading it will continue to do so. Big suprise that RHPT would cower and avoid controversy, though. What a risk taker he is!

I would think that this episode would teach us all that what we say is findable by people other than our pals. That's neat, though. Think of all of the people that have found your blog and been influenced by it that you don't know and who you were never made aware of! If this guy found your site, think of all the others that have that discovered it but didn't feel compelled to comment. That, I think, would be empowering.

Here's hoping the hiatus is brief.

The hiatus shall be brief. I just wouldn't expect anything for a few days.

The real questions: Will you give the restaurant a second try, and if so, will we hear about it?

Anonymous is the Mysterious JimD.

I agree with LoM not because I'm avoiding controversy. I agree because I would feel the same way if this had happened to me.

After reading Bob's comments, I might decide to go anyway and give it a shot.

When to pull or retract a post is always a hard thing to answer, its your blog and you can do as you please. I think all of us here are your friends and we are just taking part of the conversation with you, so I hope the hiatus is short.

Regarding Johnny Clambake's, what I don't understand is that if you are coming up so high on the Google search results, why doesn't he take that opportunity to carry out the conversation with you and other Internet readers.

As a new restaurant I am sure they have some things to work out with the facility and the menu, but in my eyes as a customer, I would probably appreciate more if I saw the owner/manager of the place coming to this blog and letting us how things are going to improve. If he took the time to call you at home, he could also have taken the time to write his thoughts and how he was going to improve his restaurant.

Puzzled at how I got brought into this,

Oh, and if I have any say in the matter (assuming RHPT will let me), I vote for anything that keeps the League posting.

Look, I understand not wanting to put poor people out of work (although, to be honest, these people can probably find new jobs at equal or better places within 48 hours of leaving Johnny Clambake's- there's certainly no shortage of food establishments to work at in Austin) and I understand the admirable trait of not wanting to hurt someone's feelings unneccessarily, but the bottom line is that The League didn't make any personal attacks against anyone, and he wasn't maliciously trying to get anyone fired or make their lives difficult. The League was just posting honest opinions which any person out there had the right to agree or disagree with (note that not one person has come forward to talk about how good this place was). What bugs me is when someone (especially a big, corporate someone) tries to tell someone else that they don't have a right to express an opinion. It would be different if you just launched into a bunch of personal attacks against someone and were taken to task for it, but if you're selling your product to the public, than the public has a right to react to whatever product you're selling. It's called the free market. The argument to keep Johnny Clambake's going for the sake of the employees is kind of like saying we need to keep growing cigarette tobacco for the sake of the poor farmers (well, okay, that analogy may be a bit extreme, but you get the idea).

I assure you, my conversations with Mr. Clambake wound up very cordial.

I will let you debate this with KareBear, who is on my side in the matter.

Johnny Clambake just decided to try a different strategy on you after being a jerk didn't pan out. And you fell for it. Sucker.

Again, take it up with Mom.

I sense a record number of comments for a League posting!!!!

Can we do a "League" event at Cannoli Joe's? All bloggers are welcome. I will cover entire cost of the event. I would prefer a lunch and cap the number of attendees at 20.

Let me know (Greedy capiatlist pig that I am)