There's been some buzz about Star Wars' 30th anniversary lately. So now's as good a time to talk about it as any.

Like probably millions of other American kids, my childhood is intrinsically mixed up with the Star Wars franchise. There's no beginning of my memory of childhood that is really separated from my first memories of Star Wars. My earliest memories include falling down some carpeted stairs at an apartment complex where we briefly lived and a matinee showing if Star Wars that The Admiral took me to when I was two (during which the @#$%ing Tusken Raiders scared the living @#$% out of me). I have a fragment of a memory of staring wide-eyed as the Death Star exploded into a million, billion sparks (back before that odd pressure wave was added to the effect). Others have suggested that, no, I did not see the movie in the theater until some re-release. I confirm that I saw the movie during it's initial release.

By the time i was three, the bedroom I shared with Jason had one wall covered in wallpaper featuring photos of the Star Wars characters, as did bedspreads and books scattered around. Every Christmas and birthday meant the arrival of a landspeeder, or X-Wing or one of those little 12"x18" playsets for the Star Wars gang to hang out. 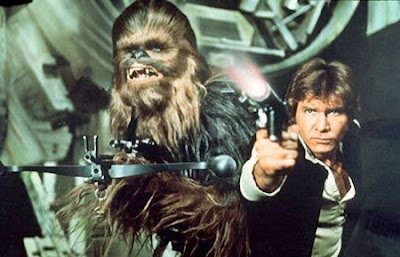 The kids will be amazed to hear this, but we couldn't go and rent a movie six months after its release, and so you didn't sit down and watch the movie whenever you liked. We had the kid's Star Wars storybook that we'd page through and look at the pictures and figure out the words, and wonder why this scene featuring this guy "Biggs" telling Luke to leave Tatooine was in the book, but nobody remembered seeing it in the movie. So Star Wars was there while I was learning to read.

When we played outside, we had Han's blaster, and a Stormtrooper blaster (they weren't "guns" when you were playing Star Wars. They had to be "blasters".) And one Halloween I was Han Solo, Jason a Jawa, the kid down the street was Luke, and his little sister... an adorable panda bear.

It was unlikely you hadn't seen Star Wars, but if you hadn't, then you were either not born in the US or were, literally, a girl. Usually it meant you were a girl whose mom didn't think girls needed to see movies about space cowboys and samurai in order to be a proper young lady. And whose dad had probably gone to go see the damn movie, himself, anyway.

But Star Wars also gave us ideas about girls, or at least Princess Leia made us believe that girls were supposed to carry blasters, and that their whiplash insults were really just a prelude to smooches we'd get in the engineering bay of the star cruiser we'd eventually win in a hand of cards.

And, poor Carrie Fischer, will always be seen in the mind's eye of a generation of Americans as the girl who launched a thousand hormones when Lucas put her in a metal bikini and made her sit next to Salacious Crumb. (Of course we just as quickly learned that sexiness doesn't equate to helplessness when Leia took Jabba out with the very tools of her imprisonment. So there.) 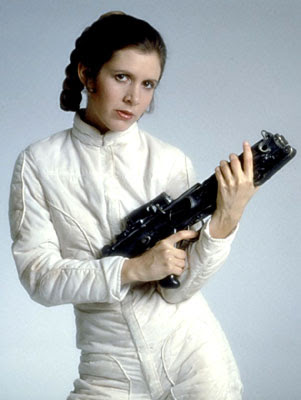 Most certainly a dame in the media the league once dug

And was there anyone better to teach us that dads can make mistakes, too, than Darth Vader? or Palpatine to teach you that putting a bottomless pit in your living room in an architectural bit of hubris you might not want to consider?

And Yoda taught is it is not the size of the person who matters... not when you really want to move that X-Wing. For years The Admiral would quote to me from Yoda, either fancying himself to be a wizened Jedi Master or knowing that I was far, far more likely to buy the words of Yoda than whatever other advice he might give me. "There is no try..." was oft quoted in the halls of Steans Manor.

It's sad to dwell on the eventual limping fate of the series, but especially with the first two movies... We were kids who still grew up with fantasy lands full of dragons and giants. But we were also kids who had robots and slug gangsters and giant, mechanical quadrupedal death machines to fill our fantasy worlds. Mystic knights of virtue (as well as their brethren who'd gone wrong and needed redemption) populated our consciousness, and, hell... my 4th grade teacher used both Episode IV and Episodes IV-VI to illustrate the Aristotelian three-act structure as well as the various literary themes of Man vs. X.

I have no idea what kids today have latched on to. Power Rangers or Yu-Gi-Oh or something, I guess. But it was a smaller world, and pondering this other universe was something we all had in common.

That's it. I'm not editing this thing.

You guys chat about Star Wars amongst yourselves.
Posted by The League at 10:09 PM

I will never forget the time Peek took me to ESB. The crowd hissed when Vader came on screen, cheered for Solo and booed Luke. It wasone of the best times I had in HS.

Back before Lucas wanted to show megalomaniacal control of every print of the original trilogy, those screenings at the Paramount were a blast.

Summer series is on at the Paramount. This weekend has both 'Casablanca' and 'Star Trek II'. Go figure.

That's so funny you mention that about the book. I had that book too, and I remember thinking, "who is this Biggs guy?", and "I don't remember him being in the movie."

I also vaguely remember the screening at the paramount. It was a good time because of the audience interaction, and the shouts of "incest". Austin has it's share of StarWars diehards.

I remember their actions figures didn't have the cool king-fu grip so I preferred to play with the GI Joes.
Peabo

I still have that book. It's on my bookshelf at home, next to the storybook of "The Black Hole," which, interestingly, also has still shots of deleted scenes.

Why the hell do we all relate to those movies so much? They're the most pervasive, ubiquitous fable existing in the collective consciousness of our generation. How the hell did Geroge Lucas manage to do that? No matter how much people try to explain the appeal or the audience reaction to these films, there's something fairly inexplicable about the whole phenomenon.

I was too young for IV, have flashes of V, but def. remember ep. VI in Amarillo, TX.

Between Deborah Harry on the Muppet Show ( boy scout uniform + blondie = aiieeeee ) and Leia's metal bikini i revised my opinion on femaleness from "dress-wearers" to "worth further investigation".

Amen, Amen, and again I say, Amen to all in this post.

Steanso, the mystery as to why Star Wars is so great is because of Joseph Campbell. Lucas was his student and learned from him how myth works. He then took ancient myths, truths that are essential to humans, dressed them up and put on a show. At least that is my tiny understanding why these films resonate so deeply. Also, they are just great.

There's almost some myth building around Lucas' myth-making itself. I watched a two-hour feature on the History Channel last night that was mostly rehashing the Joseph Campbell points on Star Wars as myth... And I just kept wondering if they could have gotten Camille Paglia, Tom Brokaw, Newt Gringrich and others to come on and talk about "Clash of the Titans", "The Last Starfighter" or "Dragon Slayer". The high visibility of the Star Wars movies seems to draw in commentators of note, which, in and of itself gives Star Wars a level of importance that I guess it warrants, but it seems to feed upon itself in an odd way.

I don't at all disagree with the idea that Star Wars utilizes the touchstones of myth, I just don't think Star Wars is unique as a sci-fi or popular media that replicates mythological structures in order to tell its story. It's just interesting that the Star Wars films CAN draw people of pop/cultural note to the films.