So back when I didn't feel like blogging for a few days, I asked for Loyal Leaguers to submit questions. And one Loyal Leaguer asked the following super-related question:

Aside from how Superman has made me sort of poor... I can't think of a compelling argument for why I would convince myself not to become a fan of the Man of Steel. My Superfandom has sort of served as a funnel to contain a lot of my smaller tics and obsessive tendencies that I am absolutely certain would have manifested in other ways. And as I honestly believe that the ideas behind Superman are kind of neat, if not merely benign, I'm not sure if I can form a compelling argument as to why I wouldn't be a Superman fan. 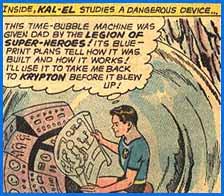 I think my Superman fandom sort of forms out of this perfect storm of how Superman intersects at so many of my areas of interest. There's film, TV, comics, pop-culture history, a passing interest in mid-20th Century sci-fi, somewhat more substantive history (as in the context of Superman's genesis and how subsequent portrayals have reflected the attitudes of the time, as well as corporate culture). Add in my love of mentally categorizing things, date-stamping items, cataloging, etc... (I've often thought I should get a master's in Library and Information Science). As well as the sheer vastness of not just the DCU, but 70 years of Superman media... There are literally over a thousand Superman comics I'll never own, maybe thousands of stories I'll never read. Whole television programs I may never have a chance to see (every episode of Smallville, Lois and Clark, the Adventures of Superboy, the many iterations of Super Friends and the various Superman cartoons that have hit the air...)

So, yeah, there's sort of an endless realm of discovery within the character and franchise, brand, what-have-you.

And in some ways I almost think I need Superman to occupy the portion of my brain that enjoys worrying about those sorts of things. As I said before, I am pretty sure if it weren't Superman, it would be something else such as airplanes or cars, sports or music or something. 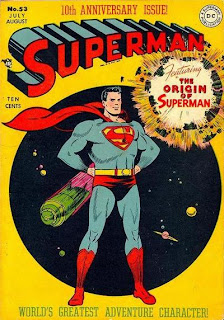 The source of the Superfandom has a few crucial moments, and I have no idea where the cut-off would be. Would it be The Admiral taking me to see the first movie when I was a little kid? When I saw the second movie? The third? Watching SuperFriends? Tying on handmade capes received as gifts from my grandmother and playing SuperFriends in our basement when I was three or four? (I always got to be Batman or I pitched a fit. The Superman thing came along later).

Would it be when I saw Superman: The Movie on TV one night (the first time I'd seen it in years) when I was 14 and was blown away by how genuinely good it really was? Would it be when I saw internet bulletin boards for the first time in college and was reading Superman forums? When Bruce Timm and Paul Dini launched the Superman animated series? When I crossed the line from picking up the occasional Superman comic in college to picking up the full line? When I started reading up on some of the randomness of the Superman comics in order to make sense of Big Blue, sometime around 2000? When I hung that enormous Alex Ross poster in our living room in our first house and poor Jamie had just seen the tip of the iceberg?

Like any other memory, the idea of erasing some part of your mental make-up can be a bit horrifying. Who would I be if not for the Man of Steel? Much different? I've no idea, but like any icon from our youth, it's difficult to imagine what we'd be if it were stripped away. 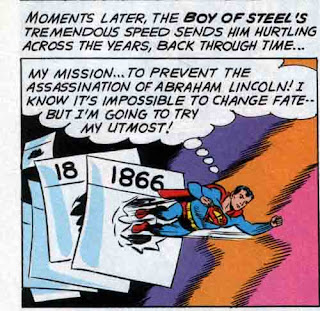 Perhaps at the root of the question may be the possibility of whether or not I think I would be a more successful person, a kinder person a more decent person if I were not a Superman fan. I don't think so. Do I think Superman has made me more successful, kinder, more decent...? I can say that surely my interest in the character was based at least in part upon a representation of what I felt reflected my ideals, especially once I no longer found myself as interested in some of the more extreme elements in comicdom. Whether Superman reinforced those ideals or not..? maybe you could ask Jamie. There's nothing mystical there. I just happen to think we tend to seek out those things which have a ring of the familiar.

I'm fairly certain that at this point it will be a long road ahead for me as a Superman fan. I enjoy picking up vintage back-issues, enjoy reading up on Superman's many incarnations, track the movie franchises and look forward to the release of Superman material on home video. Jamie's been plenty patient with the whole thing and has nary batted an eye as whole sections of the house have been given over to Super-Memorabilia.

So, yeah, we'd probably be driving gold cars and living in a mansion now were it not for Superman. But, you know, we have our fun.

The funny thing is that I know I'm not alone. There's a Superman Museum in, of course, Metropolis, Illinois. The Superman Homepage is very well trafficked, and Superman through the Ages, the Supermanica Wiki is cool, and there are a slate of other encyclopedic-style web sites dedicated to the Man of Steel.

We are among you, and our numbers are legion.

This was a tough question. Hope you don't mind that I took so long to answer it.
Posted by The League at 7:37 PM

Superman did not mold you to believe in Truth, Justice, and the American Way. You've always been courteous and helpful to strangers. And strangely, even before your Superman obsession, you had the mysterious forehead curl...