Tonight was Transformers + Robosaurus = Awesome. Peabo, if you heard lots of roaring of both crowd and robotic dinosaur from your home, you were right to tremble with fear and awe.

We were joined by JackBart and his fried, Tara. We also caught up with Denby (and hubby Mike) as well as Amy C. Steanso, of course, was in attendance. 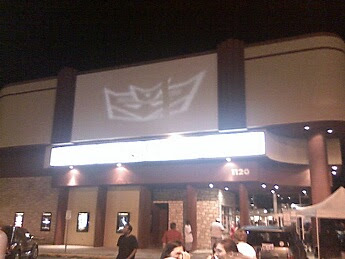 I am afraid I am at a bit of a loss for how to describe "Transformers". Some parts seemed set for an adult crowd, and then, literally the next moment, you would be reminded "ah... this is for kids".

Little boys will love this movie. And big boys, like myself, will be severely disappointed one moment and then rapt in amazement at the craziness I am seeing on screen. If nothing else, Transformers delivers a superhero picture on a scale worthy of the Transformers franchise. It's a bit tough to convey how amazing some of the sequences really were. It's also a bit stupefying how utterly goofy I found much of the movie.

I've decided to come down on the side of "Wow, what a crazy technical achievement". But I still think Michael Bay is one of the most questionable talents in Hollywood. As much effort as he was willing to put into the movie, it wasn't that he didn't seem to take the characters seriously, it was almost as if he was experiencing some of that embarassment that directors used to feel making big budget superhero films in the 80's and early 90's, before Spidey made it respectable.

But, as Jason said, "What did you want? A grown up movie about a line of toys for kids?" I dunno.

Pair that with some of the most incredible stuff I've seen on film in quite a while, and I have to state that it's at least worth seeing on teh big screen for the damn spectacle of it all. And... Optimus Prime.

But if you're looking for 4th of July viewing, I'd probably still recommend Ratatouille first, which is a cartoon about a rat which is probably better suited to adults who like a good glass of wine than kids looking for fart jokes.

But let's get real... we came for the movie, we stayed for the Robosaurus! 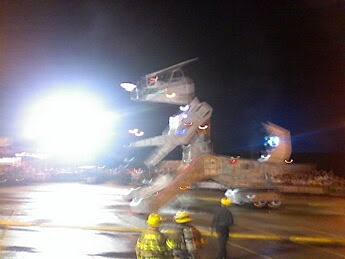 ROBOSAURUS!!! He's destroying cars for the Spirit of 1776.

Apparently folks who landed tickets for the 8:45 show got rained on and Robosaurus spit no fire. We were dry and got two shows' worth of fireballs and amazing carnage. Add in a live band, wanton destruction, the fire department (on hand in case an audience member spontaneously combusted from sheer awesome overload)and the most baffled MC to hit S. Austin in many a moon...

The poor MC was clearly used to Monster Truck shows and dirt bike rallies and seemed a bit confused by the fact that the mention we were in Texas did not elicit applause, nor when he went oddly jingoistic and declared (with no trace of irony) that Robosaurus was tearing cars apart for the 4th of July and the The Spirit of 1776.

What did get applause? Fireball.

Okay, you guys got my cameraphoen shots, and I'm tired. I'm going to bed. 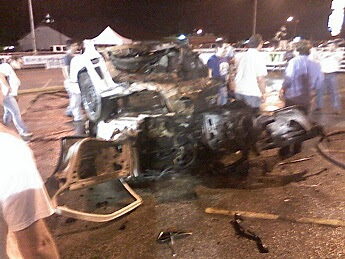 Looks like a great time! I'm glad you made it out alive.

I'm glad I didn't make it out. I've been dealing with a chest cold ( I'll spare you details, but Mucinex has a whole new place in my heart ).

But now that I hear that the show I WOULD have seen was rained out, I'm glad to have missed it.

Thanks for the invite.

You mean the all hands invite I sent to every Leaguer, nationwide, when I learned of the event?
hey, if you can't fly down here to see a movie, I can't help you. I remember a certain someone who hopped in an airplane and made it to the BMT for a certain viewing of a certain movie...

Optimus Prime made this movie for me. Plain and simple.

As to the "utterly goofy" parts. I agree with you AND your brother. They were utterly goofy parts. But they didn't bother me in the least, because I fully expected them. A "heavy" or "dark" sci-fi movie would have been terribly out of place, and where else could they have gone with giant robots?

Watching the Secretary of Defense lay down supressing fire was my favorite of the utterly goofy moments.

Dedman definitely gets the 2007 Eeyore Award! I, too, drove to Beaumont with little more prodding than a general posting on The League! (and it's a good thing I did, too, because it was on that trip that I first met my dark overlord, Randy...)