Comics You Should Be Reading: Captain America 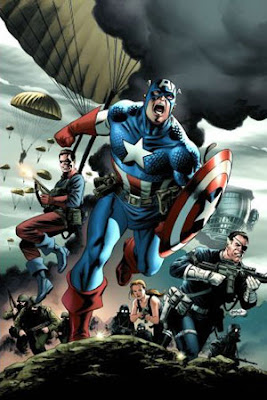 So, you may have heard several months ago: They killed Captain America.

What they did not tell you is that the 24 issues leading up to the Death of Captain America and the subsequent issues following have been absolutely engaging reading.

I thought I'd post on this, thanks to this story which ran today on CNN.com.

Writer Ed Brubaker took over the reigns on the flagship title for the Sentinel of Liberty, relaunching the series with a new #1. I was familiar with Brubaker from his work, mostly, on Gotham Central (perhaps DC's most underrated title of the past six years), and had read a few other comics he'd penned, and had planned to follow him to Marvel. I did pick up issue #1 of Brubaker's run, enjoyed it, and planned to pick up the collections of the series... But somehow I never got around to doing so.

And then I heard they were bringing back Bucky.

Bucky was Captain America's youthful sidekick in the original comics sold during WWII, but he'd never been part of Captain America since Atlas/ Timely became Marvel. It had been explained that Bucky was killed during the final mission in which Cap, himself, fell into the sea to be frozen until found and thawed by the Avengers. Wacky stuff, but, you know... you grow up with an idea and it doesn't sound totally weird.

Anyhow, Bucky's death was canon, and for whatever reason I took exception to the idea that they'd bring back Bucky Barnes. His death was as fundamental to the mythos as the death of Jason Todd had become to the Bat-comics. Well, of course, we know what happened with Jason Todd, and so perhaps having Bucky around didn't seem that crazy.

Brubaker's take on Cap isn't so much superhero as super-soldier. Or, more specifically, super-anti-terrorist operative. World weary, but with a certain optimism and faith in what he's doing, it makes for a good, three dimensional character behind the shield.

The plot is not convoluted in the way so many comics can become, but rather feels novelistic. There's a lot going on that doesn't require punches to the head (although those happen, too), and there's a good story. Good enough that, in the telling, the return of Bucky feels less like a stunt to draw in readers, and more like one of the unfortunate side effects of the world Cap's been a part of since WWII. 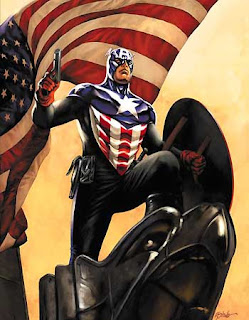 I have to thank Nathan Cone for pointing me back towards the series. Part of why I picked up the Omnibus was that Nathan told me he was reading the series and was still very enthusiastic about it.

You may be aware that Cap was killed some time back, but that story is just as fascinating to watch unfold. Unlike the impenetrable and winding plots of the Death of Superman and World without a Superman stories, the post-Steve Rogers world feels organic, and as if the characters are acting from a real sense of loss and grieving (which, in superhero comics, rarely means sitting around crying).


Anyhow, pick up Brubaker's Captain America.
Posted by The League at 9:01 PM

I have been reading comics for about 30 years now and I read Captain America off and on but never for too long. I didn't even really pay attention when I heard that they were starting Captain America at #1 again. I figured it was just a gimic.

That was until I heard the guys over at Around Comics gushing about the Winter Soldier storyline. I too was skeptical about them briging Bucky back. Considering how badly they handled Jason Todd's return over at DC, don't get me started on that mess.

Anyway, on their recommendation I picked up the first new Cap trade and it is fantastic and I've been a fan ever since.

Brubaker really has a handle on the characters and the world in which they live in.

I can't recommend the series enough and the new Cap is not a gimic it is a very natural progression of the storyline. Kudos Brubaker!

I'm in complete agreement, Simon. I had picked up the first few issues of the series when it had previously relaunched around 2002, and while that was different, it wasn't anything close to what we got with Brubaker's series.

Here's to hoping Brubaker, Epting and Co. stick around for a long time to come.

And, yes, let us not ponder too long about the return of Jason Todd. That is a post I'm holding off on until after things shake out with Countdown. But, yeah, it's been dissatisfying as a fan. As a narrative, its been pointless and inconsistent.

I'll be looking forward to the Jason Todd post. I've just subscribed to your blog so I don't miss it.

I'm sure that you'll touch on the fact that Batman characters have no place in a cosmic storyline like Countdown.

It's an excellent point to consider. I will include in my post.

I forewarn you, the wait could be a while, and expect a lot of nonsense between now and that post.