You Should Be Reading: BLUE BEETLE

I was as bummed as the next guy when DC killed off Ted Kord in the event comic "Countdown to Infinite Crisis". And I think, in some ways, DC knew they'd kind of made a mistake. They'd finally put the spotlight on a character who was almost universally loved, but who had a hard time making it as anything but a supporting character. But certainly, the fanbase liked the character and wanted the possibility of having Ted in more stories.

Ted Kord as Blue Beetle was just fun. He was Batman with none of the trauma, cool gadgets and a fun pal in Booster Gold. What wasn't to like?

I'm happy to report that, in spite of the end of a great character in Ted Kord, DC's replacement wasn't just some half-baked replacement so they could put out a new #1 and temporarily lift sales. DC introduced a whole new concept with the creation of Jaime Reyes, a 16 year old living in El Paso who has merged with the Blue Beetle Scarab once owned by the first Beetle, Dan Garrett, and the second, Ted Kord.

I was originally skeptical. Both Marvel and DC had been trying to catch lightning in a bottle again since Spider-Man hit the scene with a constant stream of teen-agers with varying degrees of tragic backgrounds and mopeyness. The formula had never really managed to coalesce again, but that didn't mean teen-book after teen-book hadn't hit the shelves. 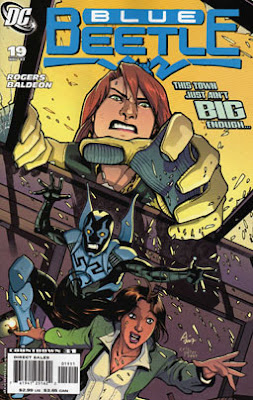 Jaime doesn't always handle all of the threats he faces with the calm, cool nerve of an action hero.

Blue Beetle tried something a little different. Jaime wasn't an edgy kid, he was a good kid who lived with his parents and had a fairly standard relationship with his folks. He even told them about his Beetle-powers right off the bat. Further, he had supportive friends, also in on the secret identity, and stayed in El Paso, rather than immediately getting shipped off to some other town that the writers might know better.

Perhaps because Jaime isn't moody or depressing, its a bit easier to believe he's tossed himself headlong into the superhero business with his family's support and a bit of fun rather than because he's suffering from crushing guilt.

Moreover, John Rogers has managed to tell a fairly expansive story without undue decompression, and after providing several pieces along the way, the story of Blue Beetle is finally coming to a head. 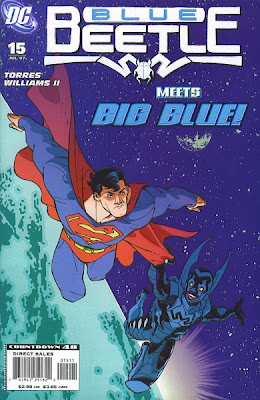 Beetle keeps good company. This issue featured Beetle and Superman visiting Austin, for which the artist had no references.

Honestly, if DC is looking for a property they could easily bring to other media, the latest version of Blue Beetle is it. The generational aspect of the character might be fun to explore, but I think audiences would also really respond to not-just-eager-but-uncertain hero Jaime Reyes. Throw in one of the best supporting casts in comics since Clark Kent met Lois Lane, and there's a lot there.

I don't know if DC and writer Keith Giffen knew exactly what they wanted to do for the first few issues, but when the comic was handed over to John Rogers and the armor changed from so weird it was thought to be magic to a sci-fi angle with global consequences, it's been one of the comics I pick up first from my stack every time it comes out.

I should also add that there have been occasional guest-written issues, and those have been fun as well. I think that already the character and his environment are well-enough defined that guest writers can step in and keep up the spirit that Giffen and Rogers have worked to define.

Check it out. Blue Beetle is a good read.

Plus, really, the armor is totally cool.
Posted by The League at 11:13 PM

Are there nefarious villains to fight in El Paso?

Yeah, Beetle doesn't so much have a Rogues gallery quite yet. His friend Brenda's aunt plays a somewhat sinister role as La Dama. The main source of trouble thus far have been the aliens who sent the Beetle Scarab in the first place.