Here's some information on bonus features on the "New Frontier" DVD. If its anything like the features on the "Superman: Doomsday" DVD, these will be fairly high end productions. Of course, its all very pro-DC propaganda, but the bonus videos were actually informative and fun. 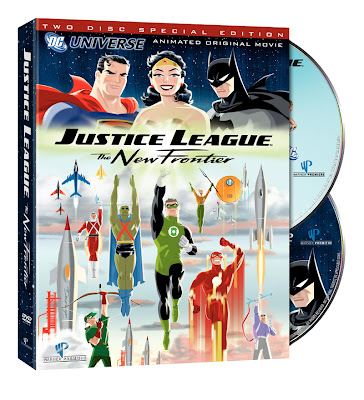 “Sneak Peak: Batman: Gotham Knight ” - One part anime, one part Caped Crusader , the result is a glimpse at the world of Eastern anime sensibilities combined with a Western tradition of Batman . A detailed look at the world of Warner Bros Animation, and how they joined forces with the renowned Japanese animators to create the highly anticipated anime film of 2008.

The 2 disc Special Edition DVD will feature even more incredible extras including:

“The Legion of Doom : The Pathology of the Super Villain”- This documentary will examine the early mythological archetypes of nemesis characters from a historical perspective, and see how the tenants of this rich history were adapted and woven into the Justice League stories. The bonus feature includes many of the talent included in Super Heroes United! As well as Jim Kreuger (Writer of “Justice”).

“ Comic Book Commentary: Homage to the New Frontier” - This documentary is a nod to the fans of the New Frontier comic book. This featurette further expands the themes contained in the source material, and how these elements were truncated or evolved for the inclusion in the film. Featuring vivid imagery culled from the pages of the New Frontier comic, mixed with the commentary of Writer and Artist Darwyn Cooke, this featurette is a treat for both fans and scholars of the medium.
Posted by The League at 9:38 AM