A DITMTLOD special report: Sarah Jessica Parker = Not Teh Sexy?

Apparently Maxim, the magazine for guys too cowardly to justgooutandbuysomepornfortheloveofmike, has put out a list of female celebrities who are assumed to be sexy in the media, but with whom Maxim begs to differ.

They've presented a list of the 5 Unsexiest Women Alive.

The League believes both reactions are appropriate. It can't be fun to be Sandra Oh and to wake up one morning to find out you've been deemed one of the 5 Unsexiest Women Alive. I would say she's never really tried for sexy, but I have cable, and I once stumbled across "Dancing at the Blue Iguana". And it was not the gritty slice of life picture it was trying to be. It was so dull, I made it only long enough to see Sandra Oh in it, say something negative about Arli$$, and move on.

What is interesting is that Sarah Jessica Parker tops the list. For many a year, fans of the show "Sex in the City" have insisted that SJP was everything that a sexy, independent, urban-chic woman should be.

Others on the list are a bit more obvious.

Coming in at #5 is trainwreck Britney Spears, the subject of last night's highly disturbing episode of South Park.

#4: Madonna. Who sort of quit being sexy right after "Express Yourself", just as she was gearing up to try to chastise America for not wanting to be sexy with her, leading to her eventual move to the UK, where she morphed into a Disney villain.

#3: Sandra Oh. Poor, sad, Sandra Oh. Who is just trying to be a working actress, for chrissake.

#2: Amy Winehouse. Because a crack-smoking 20-something burning away her talent with the crystal meth and deeply in need of an intervention in public is funny-sad, and in no way sexy.

So why does SJP hit #1? She's together. She's got a career that hasn't involved becoming a public nuisance. There are plenty of other actresses who are unconventional for TV and the big screen.

All of the women on the list are generally attractive, I suppose. But that's not really what Teh Sexy means.

To some extent, sure... the women on the list don't really meet the imaginary standards of the girls in Maxim. Young, somewhat coltish and seemingly available to the kind of guy who might pick up Maxim, anyway. And different kinds of guys like different kinds of girls. I don't think Tina Fey would show up for a Maxim photoshoot.

I have gone on record, stating that I understand that Nicole Kidman is supposed to be gorgeous, but I have yet to find a dude who considers her a Dame in the Media they Might Dig. I see the high cheek bones, the huge eyes, the perfect skin... but what is there to hang onto? Perhaps a different case from Sarah Jessica Parker, who is a bit less conventional, but it is an example of someone that the Entertainment Tonight's and TMZ's of the world would insist that we all must be ga-ga over. But are we? Who made that decision?

Is it a case of what I shall call "The Julia Roberts Effect"? Where the press insists that we all find someone fascinating and beautiful, when, really... meh. That might be what women relate to, or even aspire to, but...

But, mostly, I sort of think Sex in the City, despite the promise of the name of the show, was a major turn-off. 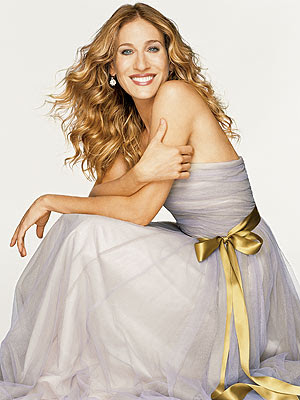 Fans of Sex in the City love Carrie Bradshaw because she wears cute outfits that are not office appropriate. She gets in daffy, messy romantic entanglements with sensitive guys who want to work things out. When they don't work out, she learns a little life lesson and/ or is able to re-assert the fabulousness that the show promises regarding her lifestyle. She has a big apartment in Manhattan and great shoes and seems to afford the cost of it all by writing one column a week where she talks about the thing she knows and loves best: herself. She has friends who she doesn't work with who can always make it for lunch, and nobody minds that they all get wrapped up in each other's very personal business (nor do the boyfriends seem to mind that every intimate detail is openly discussed). She goes out every night of the week. Through countless sexual and romantic entanglements in the show's run, nobody was ever really hurt. Nobody ever seemed to actually react in the kind of crazy ways people do when real entanglements come to an end. And, anyone who has seen as few episodes as I've seen would still know that at the end of the day Mr. Big was there as the safety net, the safe guy who would always be there when our heroine got done sowing her oats and decided she wanted for someone else to pay for her expensive shoes.

And they call superhero comics an escapist, adolescent fantasy...

To the point, what is attractive to any guy about Carrie Bradshaw?

Do you find someone sexy who is going to describe your romantic entanglements in a weekly column? Or who has a back-up plan in a rich, good looking guy who rides around in limos?

I don't think this is a question of gender inequality in programming. Could a show with the same basic premise, starring four men, have made it on the air with a title called "Sex in the City"? And if it did, it certainly wouldn't be heralded as empowering and glimpse into the world of urban sophisticate. Quite the contrary, I'd guess.

What little online reaction I've read seems to be women surprised to hear that men do not love SJP/ Carrie Bradshaw the way her fans do. They've pointed to SJP's inner beauty, the fact that maybe she is pretty, but not so pretty that she clearly wouldn't hang out with you... But most of what they're praising is not actually Sarah Jessica Parker, it's Carrie Bradshaw, plus the costuming department for her show.

Returning to "The Julia Roberts Effect"... Maybe this is sort of the same thing as when guys are baffled that women might not find their action hero of choice, the one they'd like to be like, to be the perfect male specimen. For example, I do not think Jamie wants for me to be:
-Jet Li from "Fist of Legend"
-Ash from "Army of Darkness"
-Clint Eastwood from "The Outlaw Josey Wales"
-Kareem Abdul Jabbar
-George Reeves.
But I think she'd appreciate it if I were more like Harrison Ford circa 1980 or so.

For the record, I think SJP is reasonably attractive. And I certainly believe Teh Sexy doesn't come in a certain Maxim-approved package. I'm not sure if my DITMTLOD columns have always reflected that belief, but there you are.

No matter how much SJP's defenders may wish it to be true:

-shoes are almost never that exciting to guys
-it takes a sepcial kind of guy to want to have his physical and personal shortcomings detailed in a weekly column. One that his folks could read.
-Making a career out of whining about your seemingly endless string of failed personal relationships when you're pushing 40 is in no way cool.
-(In fact, a little self reflection that isn't taking place in a weekly column might be good)
-Guys do not care what designer you are wearing. Consider how many guys you've ever heard of who watch the Oscars "just to see the dresses"
-that tutu? Kind of stupid.

I am not sure this was helpful.

I think SJP is, at best, sort of cute. Not sure this is actually a huge revelation, though. Wasn't she described as "horse faced" during her role in Ed Wood? And, yeah, I found her kind of annoying in Sex and the City (but that show was never intended to include me in its demographic).

Harrison Ford!! THAT's who I forgot to put in my column. Dang.

Mark me down as one female who personally found SITC kind of annoying.

Now I mostly think of hair products with SJP, rather than sexiness.

Oh, she may not think she wants an Ash, but wait till the Deadites show up...

Mrs. fantomenos has a huge crush on Mr. Big, so I got roped into watching a crap-load of this show. Luckily for me, Mrs. fantomenos is more of a Miranda type.

My wife also crushed on Big when he was on Law and Order (she had given all the cops nicknames, and he was "cute cop").

I've never found SJP even a little attractive. Being thin and blonde does not hottness make.

SJP with purple hair circa Flight of the Navigator = the hotness.

Charlotte Ayanna in "Dancing in the Blue Iguana" = the hotness.

I have no idea what you're talking about.

OH, geez. Yeah. I was thinking of Sarah Jessica Parker vehicles, and the line was not matching anything.