5th Anniversary of League of Melbotis

In many ways, League of Melbotis has become a chronicle of my life that I never really anticipated. And while possibly originally conceived as some soapbox, its become a doorway into a community/ family of its very own in a way that on March 30th, 2003, I never would have expected.

In the past five years I've been able to find folks who dropped off my radar, have met new people, made new friends, been able to announce births, celebrate birthdays, ring in the Holidays, share our little victories, announce the arrival of our own little puppy, track our move back to Austin, tracked relationships into marriage, and, sadly, had to wish a few good people good-bye.

We've had some weird moments, like when Meco showed up in the comments section. We've had some fun contests, entirely too much about Superman, enjoyed UT's National Championship, and all kinds of stuff. 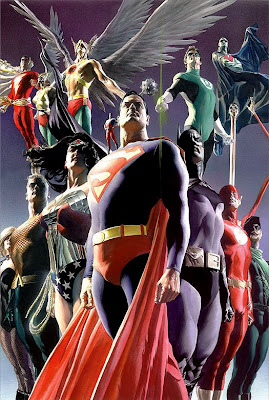 The League of Melbotis welcomes all like-minded individuals willing to use their unique abilities for the betterment of mankind.

The blog has changed, I am sure, since I left Arizona. I've changed in the past five years, too, I'd guess. I see things in older posts I miss doing. I see things I think that maybe work a little better now. It's no longer a tool to keep me attached with friends and family back home, but it now lets me keep tabs on friends and family all over the place.

And, hey, I've had an opportunity to get on my little soapbox and talk about the comics, movies, cartoons and stuff that I love, and love to hate. Thanks for being a part of that discussion.

And God help you if you read them all.

Thanks for letting me be a part of your life. Jamie and I thank you. Mel thanks you. And Lucy and Jeff, too.

Don't forget, the party for Mel's birthday is April 19th, sometime in the afternoon after 2:00. We'd love it if you could be there. E-mail me if you need directions.

Thanks to all of you once again. Here's to five more.
Posted by The League at 11:38 PM

congrats, mister. thanks to the wonders of RSS i've been able to stalk you on the internet.

may it always be thus.

wel, thanks, mrshl. Hope the law and impending wedding (did I hear that last part right?) are treating you well.

p.s., i just got the captcha wrong. i'm officially dumber than a bot.

Much congradulations to you. This is by far the most entertaining blog I read.

I am only sorry not to be the for the draft house viewing.

We need to start planning for the tenth anniversary celebration. - JD

If I'm still blogging in five years, I'll pay for your ticket to the 10th anniversary celebration, JD.

Happy anniversary to the LoM!

By the way, your audience demands that you wear your Superman costume to the screening on April 27th.

Also, I know I posed this question last night at dinner, but I never got a response, and I think it's a fitting topic in light of The League's 5th anniversary: I think it's been made pretty obvious who your favorite comic book superhero is. So who's your favorite comic book villain of all time? (and, yes, I demand an explanation as to why you picked whoever it is you picked)

I didn't know you enjoyed "keeping up" with Randy fellows.

I'll be handling the villain question in this evening's post, i suppose. I think I've figured it out.

As per randy fellows, there's no keeping up with rhpt and JimD.