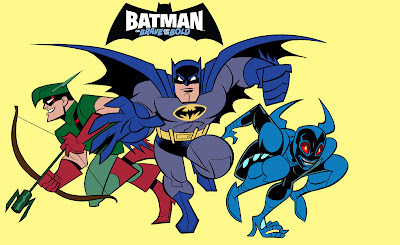 Looks like there's a new Batman cartoon coming in the next year or so, intended to replace the now canceled "The Batman" series. Which had more or less turned into a team-up series in the past year, anyway. I wasn't crazy about "The Batman". The first year or two, the creators changed things, more or less just to change them, not because it added anything to the show.

I was also never 100% sold on their character designs. And they just never really seemed to really dig in and build a world the way Bruce Timm had done. Moreover, their takes on the rest of the Justice League was a far cry from the excellence of JLU.

I have no idea what the new Batman series will be like or about, but I like two things here:

I am a huge fan of the current Blue Beetle series and character. One of the best titles out there right now, and the character is really well thought out, as are all of the details of the book.

I think Jaime Reyes is a natural for a kids cartoon show, so I just hope they don't screw it up.

Anyway, the series looks pretty straightforward. Batman teams up with someone new from the DCU every week and, I guess, saves the day. Anyhow, I'll tune in.
Posted by The League at 10:16 PM

I agree about "The Batman" series. It seemed there was not central vision to the show. I'm perfectly okay with a kid friendly vision of Bats, as long as its done in a fun way.

I'm going to translate that to: as long as they don't make it stupid and insulting, and will make kids fans of the character and not assume he's a moronic goofball from age five onward.

It is not Batman if it is not Kevin Conroy.