Hey Leaguers. Not much to report. As Steanso might say, its been an uneventful week.

Over the weekend Jamie and I began my long-dreamt-of plan to get shelving up in the hallway/ open area at the top of the stairs. The League is actually very excited about this turn of events as it means: organization. Based on evidence of my life, ages 12-18, KareBear would probably not believe I actually really, really like self-imposed organization. I like knowing exactly where things are, and setting up organizational systems. In a way, what i really wanted to do was build my own "built-in" bookshelves, but if I wanted to do that, it would take weeks, and I couldn't guarantee the shelves would be, oh... flush to the wall and all sit level. I am no carpenter.

So we've Ikea'd it. We're putting in shelves from the Billy system. The system which is going to look much better with books on it, than sitting empty.

We also sort of screwed up, and I neglected to pick up the "corner hardware" which would actually make the whole "corner" bookshelf thing work. There's also an additional, small bookshelf I think i need to make it work, but... anyway.

Tonight I intended to continue on with the great bookshelf build, but we wound up going to Austin Asian-style-food-bistro, "Zen". Which has good food, but it's claims to being "Japanese" are pretty dubious. The reality is, if the food is okay, I could care less about its authenticity or pedigree.

What struck me was how utterly unrelaxing "Zen" is as an environment. There are TV screens with 3D animations flying around, they aren't shy with the volume of music, and the art design, while interesting, is sort of aggressive. Not exactly like a stone garden.

But, again, the food is good and priced reasonably.

Speaking of reastaurants, it's been almost a year, so I thought I'd repost the Johnny Clambake's post from last year, with names removed to protect the innocent.

And Steanso's raging response to me pulling down the post.

For those of you who weren't around this time last year, the Johnny Clambake's incident was the oddest, most controversial escapade of all the escapades at League of Melbotis. Not only was I contacted at home by a business owner, some Loyal Leaguers felt my deicison to remove my post was highly questionable. Just check out the comments sections for the free-for-all that ensues.

I guess The League had strayed too far from its punk-rock roots, but hell, I was a little sensitive to unemployment issues at the time, and I stand by those crazy kids and their meatball manufacturing ways. And, hey, Johnny Clambake's has wound up making a go of it in spite of anything I thought. Bully for them.

In the end, the woner of the place extended an olive branch. Heck, a whole olive tree, but I was too tired of dealing with the issue to take him up on his offer.
Thus, we never did claim that free meal. Nor have I been back, pretty sure that I would be taken out back by guys named "Tiny" and "Chuckles" who would see how far backward my knees would bend.

Honestly, it was a pretty unhappy event for me at the time. But if you can't look back and laugh, well, hell... you shouldn't be writing inflammatory restaurant reviews or keeping a blog at all. 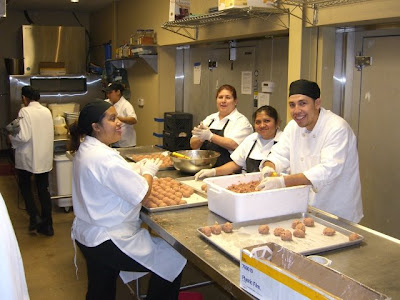 I still think Cannoli Joe's sucked. Even the idea of the place is annoying- the very premise seems to be that people won't notice how mediocre the food is, so long as you let them gorge themselves like pigs at a trough. And I want to see another picture of the Cannoli Joe's employess one year later. The only way they're still smiling that big is if they're slipping Valium into the meatballs.

Anyway, the place still seems to be going strong, I always see plenty of cars in the parking lot, and somehow they've managed to expand to have at least three Austin locations. Another triumph for lame chain restaurants with big parking lots here in Austin. Good thing we didn't do anything to slow that down.

You are a strange, angry man. next you will condemn the Hometown Buffet.

Is that the one with the giant bee? No, I won't condemn the place with the bee. The bee changes everything.

The bee rules. Leaguer Shannon once had a close working relationship with the bee.

Also, the chain buffets always have the best iced tea. I don't know why that is.

We remember you. We are waiting.