The League Reviews: Speed Racer - The Next Generation

I was asked by some nice folks at the same marketing company that had me review "New Frontier" if I'd review a DVD of what I think is the pilot of the new TV series "Speed Racer: The Next Generation". I haven't seen the new feature film of Speed Racer, but I thought I'd pop in this DVD and give it a whirl.

I knew it was going to be a trouble when the low-fi credits rolled and the writers were listed as "Jimmy Palmiotti and Justin Gray", the DC Comics writing team who never met a cliche they didn't like. The opening is horrible CG with a re-imagined Southern California rockin' take on the great Speed Racer theme, that literally sounds like a guy, his guitar, and Garage Band. Its... not good.

But, I confess to a warm place in my heart for DJ Keoki's inspired circa 1993 club re-mix of the Speed Racer theme.

So, after the credits? Yeah, uhm... it never really gets better.

The premise is that a young man of the name "Speed" arrives at a "racing academy" of some sort which is run by the now middle-aged and oddly grandfatherly Spritle. "Speed" gets hassled by upper-classmen who are mean, because that's what happens in these coming of age stories, in order for our hero to have an external as well as an internal struggle. There's a quest to become the best racer, and despite the fact that Speed seems like a nice guy, pretty much everybody has it in for him but his wacky roommate with a deep, deep crush on Speed Racer (who also built a robotic Chim-Chim), and some busy body girl whose significance is never really fleshed out.

And, as with the original Speed Racer, the fate of the world seems to be hanging somehow in the balance of the who is the best race car driver in the minds of all the characters.

The animation is some sort of odd mix of CG and what looks like Flash. Or something. And I'm not kidding when I say this, but the character design and animation both really, really reminded me of Planet Unicorn (ed note: I feel bad about bagging on Planet Unicorn. Its actually a lot like the educational comics I remember getting in elementary school on the dangers of THC, or the recent comic we got from the vert on flea control. As in, "well, it's recognizably a person, and my art-student kid needs the work, so we're forging ahead"). I mean, its really, insanely bad.

The vehicular animation sorta looked like someone with 3D Studio Max and some free time. Its the sort of stuff that truly does seem as if it were designed as some sort of web freebie. And, honestly, if I thought that this was the future of animation, I would despair.

There's some particularly crappy CG in a portion where the laws of time and space breakdown and Speed drives on a "virtual track". Its tough to explain, because it makes no sense and sucks, but the animation here is a weird mix of bad CG and, maybe, Q-Bert.

Also, Speed has an oddly bad haircut. I don't know how they got to actual animation with that particular hair-don't, but it looks a bit like a ladies' haircut of some sort. Like a wedge gone bad or something. 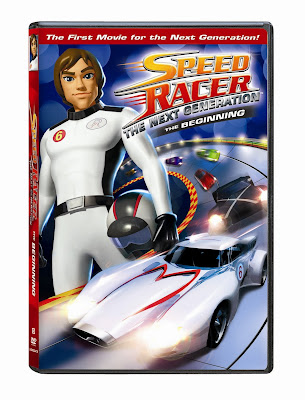 It all sort of made we wonder. The quality of the original Speed Racer cartoons was always kind of iffy in both the animation and plot departments. I was never a huge fan of the original show. As I recall, it was usually just on between other cartoons, and I always felt the show was a little light on Racer X and Chim-Chim. But the show did have a particular look, which this show did nothing to preserve, even while including stock Speed Racer art in the show in various ways.

All in all, the overall cheapness of the movie just reeks of a fairly cynical money-grab on the part of Warner Bros. Which makes sense. I sort of think that's how the whole Speed Racer enterprise has been handled since they started running those E-Surance/ Speed Racer TV spots.

The voice acting is poorly directed, and uniformly flat. The guy playing Speed sounds like he's perpetually apologizing. His roommate (Gordon? It's been twenty minutes, and already I can't remember), is shrill and irritating. But no matter the scene, all of the voice actors use exactly the same intonation. Its weird, and kind of reminiscent of when people make funny Flash movies on their own and just do the voices themselves or get a girl from their class to speak in one of the parts.

There's an odd Luke Skywalker storyline to this story, which Palmiotti and Gray go ahead and acknowledge early on in the movie. In fact, the only thing I really liked about the movie was when the characters would occasionally make comments on the action, which seemed to almost acknowledge the lack of effort on the part of all hands.

Whatever magic folks might have felt the original series contained isn't part of the equation here. Even the races feel dull and lifeless. What was considered to be life-or-death struggles in the original series is reduced to some sort of VR racing in this version, with cardboard cut out characters, 100% recycled plot elements and bland and/ or annoying protagonists. The family dynamic of the Racer clan is intentionally missing in order to give our hero a journey of discovery, and teh school yard setting takes away any weight that the international racing in the original series contained.

In many ways, this pilot reminded me of a lot of the first issues of comics from the post Spidey-boom of 2002 or so. Teenager with a mysterious gift gets hassled by his peers for simply existing, plus there's a shady adult businessman with dire plans for our hero. Unsurprising this might feel familiar, as few have ever accused Palmiotti and Gray of blowing readers' minds with original concepts.

I dunno. I've already thought too much about this, especially for something I'm highly suggesting you avoid.

I was going to do a give-away of Ol' Speed Racer here, but I like all of you too much, so I'm not going to force this DVD upon you.

There's also a trailer for an Avengers Babies movie on the DVD. Or Avengers Next. Or Something.
Posted by The League at 11:26 PM

Well, I guess we can't just call you a sell out anymore simply by virtue of giving good reviews to anybody who'll throw a free DVD your way. I guess they're going to have to step it up and start flying you out to California for free tours of their studios if they wanna buy a favorable review from you now! (or I bet that some rare, special edition comic books might do the trick)(or a crate of whiskey)(or a monkey)

(or a crate of whiskey and a monkey)

As I tried to point out during that whole controversy, they pretty much knew they had an audience inclined to enjoy New Frontier. Which I think is the point.

Anyhoo, I'm not bought off at this point. They want my credibility, they're going to have to throw around a lot more money.

The Matrix was good. Everything since has been tedious and boring. V for Vendetta was singular in it's lameity.

Well, I still haven't seen Speed Racer. There are a few other movies I need to see first.

I wasn't ever a fan of the actual plot of The Matrix. It just didn't have any internal logic. But I did like the FX and Carrie-Anne Moss. And I liked Bound, but that could have been me liking Gina Gershon, Jennifer Tilly and Joey Pants.

So I dunno. I never saw installments 2 and 3 of The Matrix. I was disappointed with the adaptation of V for Vendetta.

This cartoon seems to have very little to do with the new movie and more with the TV series from the 60's.

Now Cannoli Joe's has company in the bad review department.

Did The League give Cannoli Joe's a bad review? I seem to remember something like that, but then there were pictures of the smiling Cannoli Joe Oompah Loompahs and somehow everything was better and their food was somehow more acceptable...
It got very confusing.

Hey, I never said the food suddenly improved at Cannoli Joe's. And this is far from my second negative review.

It might be good to point out that the cartoon is aimed at ages 6-12 at some point in the review.

Sorry, but I thought the Matrix was a pretty boring mash-up of pseudo religious philosophy and nifty computer graphics.

The DVD was produced by Lionsgate and is followed by a 26 episode season on Nicktoons. The commercial was Geico and not E-Surance. Do some research if you are going to expect anyone to take you seriously as a credible reviewer.

I think someone got their feelings hurt by the review.

It is true that a while back Geico re-used some of the original Speed Racer animation in an ad.

Okay, okay... The cartoon is aimed at the 6-12 age group. But I don't think in this day and age that's much of an excuse for this sort of low quality in animation. I don't think there's going to be an expectation of the 6 year olds watching the video (on home video) or catching the 26 episodes on Nicktoons to have done research.

Also, in this day and age, assuming a nostalgic bit of animation like Speed Racer won't cross over to adults is... bizarre. Especially given the nostalgic giddiness on the extras by the team putting the video together.

The video is distributed by Lionsgate, who has been responsible for a wide array of stuff I've seen on DVD. I don't think that matters to anybody but the folks in L.A. getting their shout-out. I know my readership doesn't care.

I was aware that this was supposed to be the pilot for a new series, and mentioned that (see the 4th to the last paragraph), but I didn't make it clear. Thanks for the help.

And, hey... you want to tell me I have no credibility? Get in line.

I'm assuming that Anonymous has some kind of business connection with this product (since he already has a working knowledge of its contents). Kind of makes me wonder whether we can trust you for unbiased responses to The League's review. (by the way- it's not really fair to ask someone to take the time and effort to review your product for free and then attack them for giving an honest impression of the work. Since bloggers don't get paid, they don't have many rewards to what they're doing other than having the opportunity to tell the unvarnished truth.)

Maybe that energy should be redirected into making a better product.

I think the credibility problem lies with the anonymous commentor who clearly has a vested interest in this whole thing.

The Wachowski bros certainly put a lot of effort into making Speed Racer... the movie overall looked and felt like a cross between anime, a kaleidoscope, that Flintstones movie, a video game and the Dukes of Hazard

I may yet see the feature film in the theater. But right now, it just hasn't felt like a priority.